We like a photographic line-up here at DSC, and if the line-up is one of winners then all the better so this shot last week from Audi Sport presses plenty of buttons, a reminder of just how much success has come Audi’s way this season. 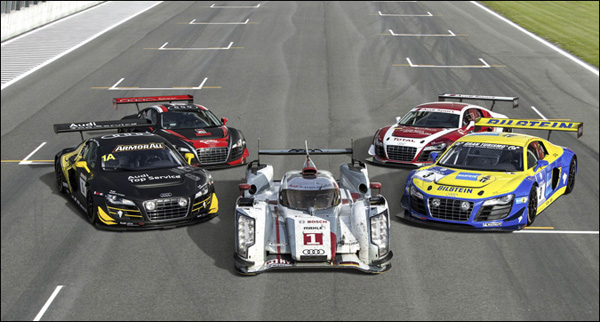 Combined, the four Audi R8 LMS cars and the Le Mans winning R18 e-tron quattro have raced gone almost halfway around the globe. In five racing commitments, at Bathurst, Le Mans, the Nürburgring, Zolder and Spa , they covered an overall distance of 17,767.898 kilometres!

Added to this are the successes achieved in the new FIA World Endurance Championship (WEC) with four more victories besides Le Mans, plus the drivers’ and manufacturers’ title wins for the R18 e-tron Quattro which racked up even further achievements including:

The R18 e-tron quattro also delivered 100 percent reliability, without a single retirement in the 2012 season.

The Audi R8 LMS meanwhile has had a simply amazing year. The ultra version launched in 2012 was lighter, faster and more efficient than its already very competitive predecessor with more than 50 percent of the car designed for customer racing is based on the Audi R8 production model.

Those titles in full: