Mazda’s Skyactiv-D technology is set to make its racing debut in the 2013 Rolex 24 at Daytona installed not in a GT car, or a prototype, but instead in Mazda’s brand new ‘2014’ Mazda 6 – yup, a touring car, albeit a very powerful one!

The Mazda will slot into the new for 2013 GX class, designed to accommodate alternative engine technologies, and it is set to make Mazda the first ever make to start the 24 hours in a diesel powered car. 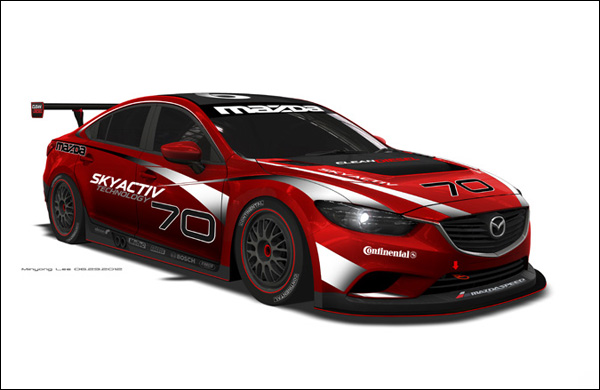 John Doonan, Motorsports Director, Mazda North American Operations noted that: “We have been eager to announce this car for months, but had to wait until the production car was revealed.  The SpeedSource engineering team, working with the Mazda engineers, have been flat out for months on engine development.  We’re happy to report that the engine is meeting the performance targets for both power and endurance.  That means 400+ hp for over 50 hours, with an engine that includes a very long list of production Mazda parts.  This is not a pure race engine; it is a production block SKYACTIV-D.  We’re excited about having our newest engine powering our newest car.”

The car will be driven at Daytona by the intriguingly rapid mix of Speedsource team owner, Sylvain Tremblay who, together with co-driver Jonathan Bomarito, will contest the new Grand-Am GX Championship.  They’ll be joined by Marino Franchitti and Indycar’s James Hinchcliffe.

“We did a perfect race last year, but just had no speed,” said Sylvain Tremblay. “This year, with the new SKYATIV power I don’t expect that to be an issue. The chemistry last year was awesome.

Marino Franchitti: “It’s hugely exciting to be back with the SpeedSource team in the all new Mazda 6, going from the scream of the rotary to the near silence of the diesel engine is going to be interesting and I can’t wait to try the new car at the Test in January. The dynamic of the team was fantastic at the last race so I’m delighted to be back together with Sylvain, Jonathan and James for another go at winning a Rolex Daytona!”

The new car will be seen for the first time at the official test “Roar Before the Rolex 24” at the Daytona circuit between 4-6 January, 2013.

Tagged with: Archive 2 columns - sidebar left, Gallery of the week