The FIA’s annual awards gala took place this year in Istanbul but there were no turkeys amongst the men honoured by the sports governing body.

Amongst those recognised were the 2012 World Endurance Champions and the GT1 World Champions.

Audi secured the Manufacturers title with its R18 e-tron quattro, adding the FIA World Endurance crown to the 24 Heures du Mans title the German manufacturer secured in June, the first victory for a hybrid car at the greatest endurance race of them all.

The Driver’s World Championship went down to the last round in Shanghai with Marcel Fässler , André Lotterer and Benoît Tréluyer edging out their Audi teammates Tom Kristensen and Allan McNish to become the first ever FIA World Endurance Champions, adding the world title to their second successive victory at Le Mans. 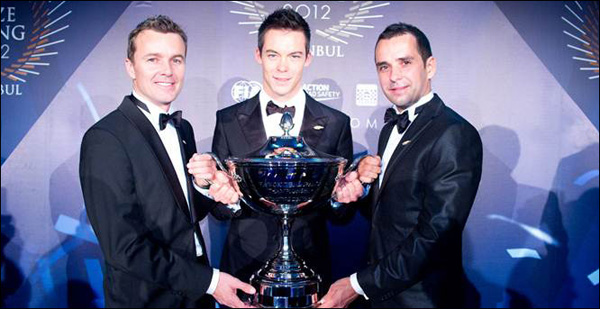 Toyota’s racing duo Nicolas Lapierre and Alex Wurz secured third place in the World Driver’s Championship by winning the last race of the year in China, adding to the victories they secured in Brazil and Japan in the Japanese manufacturer’s season which began in Round 3 at Le Mans.

Marcel Fässler: “It was a great season and we have celebrated really good wins at Le Mans, Silverstone and Bahrain. We are all eagerly awaiting the trophies now during the FIA Gala. It will be a very emotional moment, especially as no Swiss driver has won an FIA Automobile World Championship before 2012.”

André Lotterer: “To win Le Mans is something fantastic in itself but to have it now as part of the FIA World Endurance Championship is very rewarding. And to clinch the title and share it with my two friends is extremely satisfying. I’m proud that we’ve achieved that for Audi in the R18 e-tron quattro hybrid sportscar as the company has set many technological milestones in its history already. Innovation is in their DNA.”

Benoît Tréluyer: “To be crowned the first FIA WEC world champions is a great feeling. Personally, clinching a second Le Mans 24 Hours win in a row was my sweetest race victory this year. The WEC title is the icing on the cake and it is great to receive the trophy alongside other FIA title winners from this year.”

Dr Wolfgang Ullrich: “Audi was from the beginning of the activities in sportscar racing fighting very hard to make a world championship for endurance racing come true. Now we are here and get honored as the first manufacturer who has won this new championship title which makes us very proud.”

In the LM GTE World Cup for Manufacturers it was a three way battle between Ferrari, Chevrolet and Porsche, with Ferrari securing the title with two round of the season remaining.  While the title was decided using the points from the top Ferrari teams it was the AF Corse Ferrari 458 Italia of Giancarlo Fisichella, Gianmaria Bruni and Toni Villander which contributed the most, winning four of the eight races  in 2012, while a fifth Ferrari victory at the season opener at Sebring went to the AF Corse sister car of Marco Cioci, Olivier Beretta and Andrea Bertolini.

Antonello Coletta, Head of Corse Clienti:  “I am proud of the results secured this year and of the important target that Ferrari has reached in this first edition of the FIA WEC. I also want to thank Amato Ferrari, the drivers and the AF Corse team for the exceptional work that they have carried out and for showing what our cars are worth. Their contribution has resulted in a success that will be remembered as one of the most important in the history of our Company. This keeps up a long tradition that has seen Ferrari prevail in the most prestigious competitions for closed-wheel cars.”

Pierre Fillon, President of the ACO, said: “2012 has seen the rebirth of endurance racing on the world stage and I would like to congratulate Audi, Benoît Tréluyer, André Lotterer, Marcel Fässler and Ferrari on their world titles.  The World Endurance Championship is a partnership between the FIA and the ACO and this season has shown what we can achieve together.  2013 already promises to be even better and we look forward to open round in April – the 6 Hours of Silverstone.”