They took no fewer than ten top-three finishes in the 18-race Championship, eventually outscoring their nearest rivals by just a single point.

Indeed, just one point separated the top three finishers in one of the closest seasons in GT racing history. 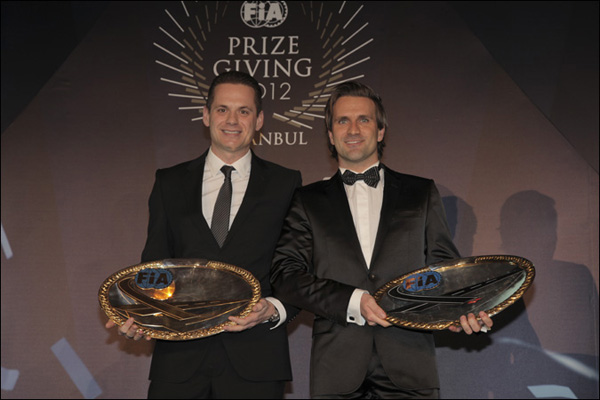 Marc Basseng, said: “I am very proud of the team, and of myself and my team mate Markus. Our attitude to the races was to be patient, consistent and for the team to do the fastest pit stops, which they did.  These ingredients were what allowed us to secure the 2012 titles.

“This showed the good performance we have had all season, scoring points at every race. We are very proud to be here to accept the awards and to represent the FIA GT1 World Championship.”

Runners-up in the FIA GT Championship in 2012 after taking 5 victories was Frederic Makowiecki (FRA) and Stef Dusseldorp (NLD) in the Hexis Racing-run McLaren MP4/12C.

On the same points, but placing third due to the number of wins, was the Vita4one Racing Team BMW Z4 of Michael Bartels (DEU) and Yelmer Buurman (NLD).

They were challenging for the drivers title during the final dramatic race at Donington Park but were eliminated after a controversial accident with the eventual champions.