Craig Baird did the double-double at Adelaide, as Erebus GT kept up their winning ways in the second round of the Australian GT Championship. 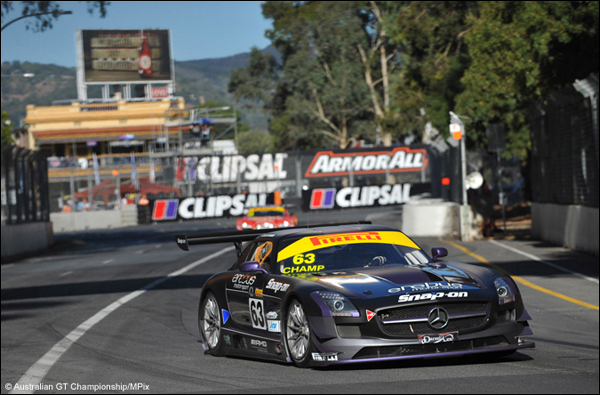 The field had lost a couple of potential winners after the Bathurst 12 Hours made its impact known, particularly with Maranello Motorsport being unable to repair their car in time for the second round.  Peter Hackett was also absent from the grid having split from the team.

Despite their absence, the front of the field was full of stars: New Zealand’s Craig Baird was lined up beside ex-F1 driver Christian Klien for Erebus; Roger Lago was back in a Lamborghini; Klark Quinn was there to defend his title in the Porsche; and, despite healing ribs, Tony Quinn would be racing with his Aston Martin.

Twenty-two cars took the start for Race One and, after the issues at Bathurst, the organisers had been careful to be transparent about the driver seedings and parity this time round.

The parity and seedings are based on the Blancpain Endurance Series and drivers were placed into three categories – Pro (Christian Klein, Craig Baird), Master (Klark Quinn) and Gold (everyone else).  The time penalties were determined on driver rank, qualifying position and race length, and would be taken in a compulsory pitstop – ensuring an open race and a transparent system.

The race weekend featured an hour-long race at twilight on Saturday and a 30 minute race on Sunday.

The Erebus squad found themselves on the front row, with Klien putting in a last-minute flyer to take pole from his team mate.

“I have built my pace slowly, but in qualifying I could really hammer it,” said Klien. “I felt comfortable in the car and went for it. I am pretty happy with the time.”

Tony Quinn had another crash in his Aston Martin, hitting the unforgiving Adelaide walls.  While this put him out of qualifying, he would be in for the race.

After qualifying, the Erebus duo would have a compulsory pitstop of 111 seconds.  Klark Quinn would have an 88 second pitstop and Roger Lago would have a 70 second stop.  By virtue of his back-of-the-grid position, Tony Quinn would only have to be stationary for 40 seconds.

Baird got the jump on Klein at the start of Saturday’s race, with K Quinn also getting past the Austrian in the early stages. 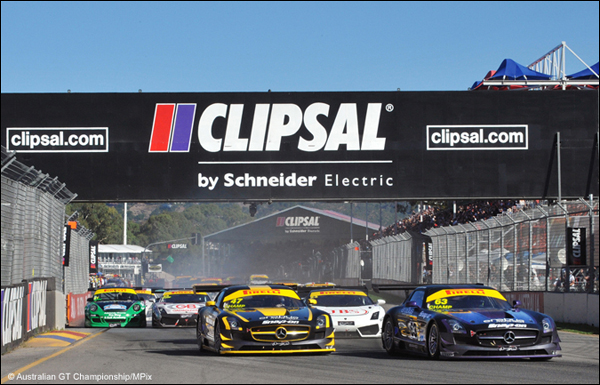 Andrew McMillin in a Lamborghini had a scare after a wheel bearing failed, leading to brake failure.  Fortunately for him, it happened going into Turn 1 – ensuring he could control the car – but despite making it back to the pits, his race was over.

As the race continued, Klien – in an effort to try and make his way through the field – made his pitstop at the first available moment.  Unfortunately for him, Quinn made his stop a lap later and opened up a gap, thanks to his stop being 23 seconds shorter.

Soon afterwards, a spectacular engine failure for Mark Griffith’s Ginetta led to the race going yellow. Taking advantage of this, Baird and Lago took their stops and gained on the field.  There was some conjecture over the order, but it stood, with Baird and Lago in the driver’s seat.

As the race went back to green and Baird battled through traffic, he tagged Rod Salmon’s Audi.  Initially it seemed that Salmon had escaped without damage, but, with ten minutes to go, something broke in the rear of the car, sending him backwards at the fearsome Turn 8.  Somehow he only made light contact with the wall but he was out for the weekend.

Baird held off Lago for the remaining minutes to take the win, with K Quinn and Klien – who lost out in the pitstop shuffle – finishing third and fourth. 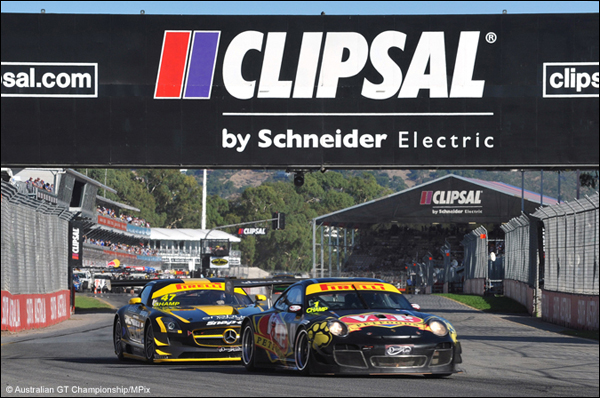 Race Two was a 30 minute affair and saw Baird complete the double.  Klien was fighting for the win before a fuel-pickup problem slowed him, demoting his Mercedes to third by race end.

Baird actually did the double twice at the weekend – he was also competing in the Carrera Cup on the same weekend and only a start-line infringement meant that he didn’t win five races from five starts over the two categories.

“It was a good race – the car has been good all weekend and I got a good start,” he said after Sunday’s race. “I had to build some time for the pitstop, so I just put my head down to do that.  It was a really good result, I was a little bit disappointed with qualifying so had to make amends.

“The SLS AMG GT3 has been prepared perfectly by the Erebus Motorsport team, which makes my job very easy.”

Christian Klien also enjoyed his weekend, despite not having the results he may have expected.

“I was able to really go for it and put my foot down,” said the Austrian. “To get the lap record was a pleasing end to the weekend, but the time early in the race cost me.

“On the very last lap [of the second race] I was heading towards the final turn and we developed a fuel problem. I coasted across the line in the end and got third place, but it was really close – just half a second in the end.

“It’s been a great weekend and a great debut with Erebus Motorsport. The team has been fantastic to work with and the cars were just beautiful all weekend.”

After his Lamborghini was badly damaged for a third time in a year at Bathurst, Roger Lago’s fourth place was heart warming for his JBS team; “Bathurst was a bit of a disaster and I thought [the championship] was all over, but I found there was a car available in Melbourne, so we got it across to Adelaide and the boys had a couple of days to prepare it and be ready for Clipsal,” he said after the race. 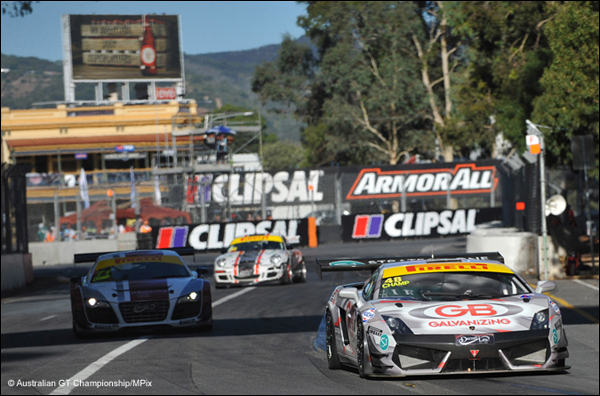 “I didn’t expect to come home first or second, but I had hoped we’d make the podium; so to do that first time at Clipsal, I’m very happy.”

Round three takes place at Phillip Island on May 24-26.