Northern Ireland’s Adam Carroll was one of the very best of the young up and coming single seater drivers over the last decade. The former BAR-Honda F1 test driver, GP2 race winner and A1 GP champion has now turned his attentions to winning more accolades in the Blancpain Endurance Series with Gulf Racing in a McLaren MP4-12C this season.

Adam cut his endurance racing teeth last season with appearances for Vit4one in a BMW Z4 at Silverstone and at the Donington GT1 finale with WRT Audi. We caught up with Adam yesterday as he counted down the days to next week’s official Test Days at Paul Ricard.

Adam, you must have been absolutely delighted to become a factory McLaren GT driver last week?

Yes it was fantastic news for me after a tough few years. To get signed up as an official McLaren factory driver is a huge deal for me because there are so very few true manufacturer roles like this around in any form of racing. To work with a company like McLaren is exceptional because in every aspect they are so professional and their attention to detail is always so thorough.

How did the deal all come about for you?

I have known Andrew Kirkaldy (McLaren GT boss) for a long time, since from when I was making my way up the junior single seater series and he was also still racing and starting out as a team manager himself.  My cousin is Tim Mullen who is also at McLaren, so I know a fair few people there already, including some of the engineers and also Sam Michael (McLaren Sporting Director), who I have known for a while as well. I also met Martin Whitmarsh at the Donington FIA GT1 race last autumn, along with Chris Goodwin who was there. I basically let them know I was available and from there I persevered and let them realise just how much I wanted to be a McLaren driver.  (pic below by Jakob Ebrey) 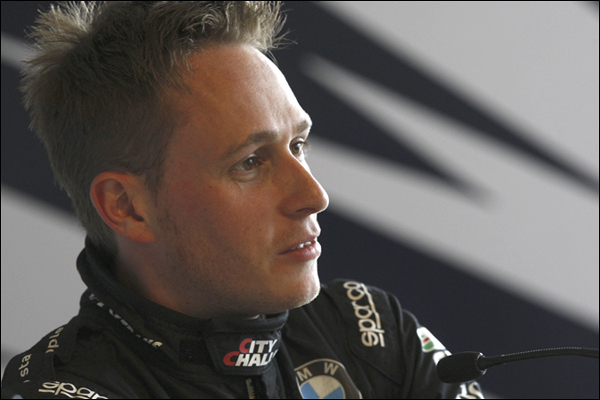 It must be special knowing you are going to drive a Gulf liveried McLaren?

“Yes of course. The factory McLaren drivers essentially get placed with the McLaren customer teams and I was delighted last week when I found out that I would be with the Gulf Racing squad. Quite apart from racing in those famous colours, I know that the team proved last year how well prepared and competitive they were and will again be this season. Now they have a bespoke Pro Class car and along with Rob (Bell) and Nico (Verdonck), I think we can be very strong indeed.

“I’m probably not going to meet the team fully until just before the Paul Ricard test next week but I know that they have big plans for this year. All bases on the driving front look covered because Rob has a great deal of experience in endurance racing and also with the McLaren GT3 car. Nico had a year last season with the Boutsen-Ginion entry as well and proved to be very fast, so we should be able to gel quite quickly together. I know the team are very focused on winning this season.

How much testing have you done and will your relative lack of endurance experience be a disadvantage for you?

I have tested a version of the car twice over the winter but I haven’t tried the definitive 2013-spec one yet.

I’ve only done two endurance races in my career but the hardest part I found to get used to were the pit stops. Despite having done many stops in GP2 and A1 GP, it is of course very different in the Blancpain Endurance Series. When I first drove GT3 cars last season it was way beyond my expectations of how they handled. Most drivers who come from single-seaters usually complain they are too heavy but I didn’t feel that all to be honest. I really enjoyed the discipline of driving the cars and as I say they surpassed my expectations. But no, I think I will pick it up again very quickly and get attuned to the endurance element straight away.

Are there different pressures at play in endurance racing?

The added pressure is that you have other guys you are racing with in the team and you have to change your mind-set to include them because you have to work towards what is ultimately best for the team.

I’m really looking forward to my first 24-hour race at Spa. That will be a completely new challenge and one I am absolutely relishing. I think endurance racing actually presents an all-round challenge that is tough to beat actually and in terms of getting a serious career going it is definitely where you need to be at the moment.

What was your initial impression of the Blancpain Endurance Series when you raced last season?

All the way through the field you can see quality in the Blancpain Endurance Series, and the grids are very, very impressive. There is a really solid combination of quick, young guys who have just left single-seaters and then there are the experienced drivers that know all the little secrets and tricks. It makes for a fascinating combination out on the track and this year will be the best ever.