Michelin has been named as tyre supplier to the 2013 Asian Le Mans Series.

“The interest of Asian motorists in cars and their demands are evolving very quickly,” said Michelin’s Serge GRISIN. “The culture of motorsport, which has long been deeply rooted in Japan and South Korea, is today developing in China. Michelin sees motorsport as an opportunity to demonstrate the qualities of its tyres to this new generation of enthusiasts who demand both safety and performance.

“We are delighted to have Michelin on-board with us for this season which is very important for the development of the Series,” said the AsLMS’s Mark Thomas.

“Michelin can claim an unrivalled commitment, experience and record in endurance racing. I am sure its contribution will satisfy the 2013 field which is particularly rich, not merely in numbers but also in terms of the cars and drivers who will be competing. Our sporting regulations call for versatile tyres and quantities will be restricted to six sets per round. Furthermore, in association with Michelin, our wish is to preclude the use of development tyres, so we asked our tyre supplier to supply high technology products which are as close as possible to production tyres”.

Michelin will look after the logistics and provide a service to teams at all six rounds of the Series with technicians on-hand to help the drivers in their tyre choices. 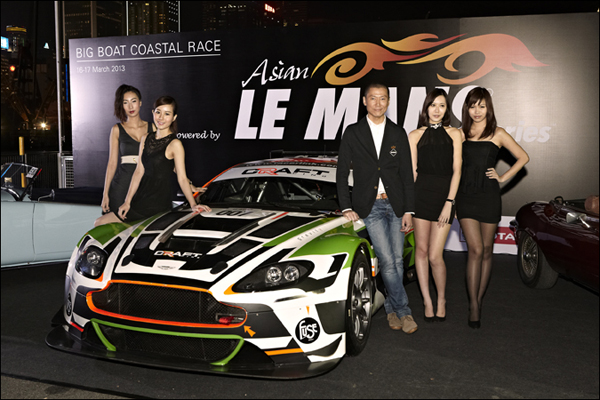 We’re hoping for more news soon from the Asian Le Mans Series on entries for the season, numbers at the moment are disappointing with a pair of Nissan engined Morgan LMP2s so far joined by around half a dozen GT3/ GTC machines – There was though little or no news of additional entries at the Series official launch earlier this week. Craft AMR Owner Frank Yu is shown above with his Vantage V12 GT3 though even this team is understood currently to be fielding a single car rather than the planned pair.