What a difference a day makes! Friday at Silverstone saw driving rain and very high winds buffeting the British GT paddock, while Saturday was calm, warm and Sunny; allowing the 48 car field to concentrate on Free Practice and Qualifying without having to worry about changing conditions.

But while it was warm and sunny for most of the day, the track was still damp as the first of the FP sessions got underway at 09:00 and the Preci-Spark McLaren was caught out – Godfrey Jones hitting the wall at Maggotts in a big way on his outlap and tearing the right-rear corner off the car. The damage was severe enough to ensure that the team trucks were heading out of the circuit well before qualifying began in the late afternoon.

Before we go any further, allow us to offer some clarification on the ‘foreign’ GT4 entries. The Avon GT4 Trophy is not a separate series as such, but an amalgamation of results from the following five races:

The intention is to boost grids at each of these races – as well as promote interest in the GT4 class – and to incentivise this through the awarding of the trophy. This means that all the GT4 cars on the grid are competing against each other in the race – i.e. there is no separate race for the additional entries – and BGT points will be awarded accordingly. The flip side of this is that the regular BGT entrants will be scoring points that count towards the Trophy. All cars are subject to the same BoP regulations and (obviously) run on Avons. Alles klar?

Despite expectations of the Porsches struggling on the Arena Circuit, the Trackspeed 997 GT3 Rs ended the morning third (#31), fourth (#33) and ninth (#32), while the #1 Motorbase Porsche ended up 16th despite its extra 75kg ballast. Top, though, was the #888 888Optimum BMW Z4, courtesy of a 2:02.766 from Dan Brown in FP2; “The car felt good and I set the time on the sixth lap on the same set of tyres,” said the Billericay-based driver. “I’ve had other drivers coming up to me to ask me how I did it, and I’m really not sure!” 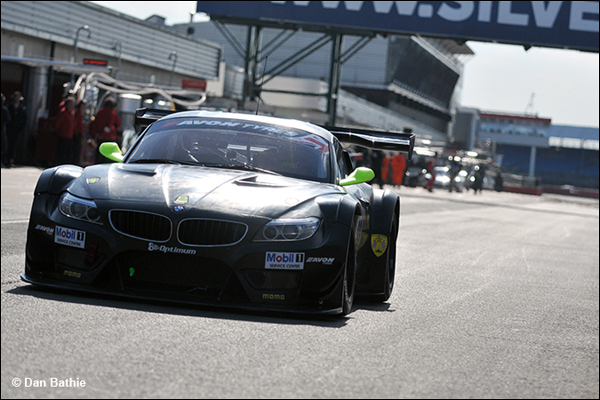 “The team is really starting to gel now,” added Brown’s teammate Steve Tandy. “We’ve got the two clashing BTCC meetings out of the way now, so the team can give its full focus to our race; and having (Triple Eight owner) Ian Harrison here is always a positive.”

There wasn’t exactly gloom and doom in the Ferrari contingent, but the consensus appears to be that the 458 GT3s will struggle this weekend; “There’s a ‘sweet spot’ as regards finding the right set-up, and if you don’t find it you can pretty much forget about the win,” said Matt Griffin. “We struggled in practice to find a set-up and will be trying something new in qualifying – we’ll just have to see how it goes.” Griffin and Duncan Cameron are now operating out of the AF Corse garages, and Amato Ferrari was on hand to oversee matters.

AMR boss John Gaw continued to personally demonstrate just how good his company’s product is by setting the second-fastest time of the morning in the PGF-Kinfaun AMR Vantage GT3, just over a tenth off Brown’s time. The better-fancied Beechdean Vantage was only 22nd, but much more was expected during qualifying. 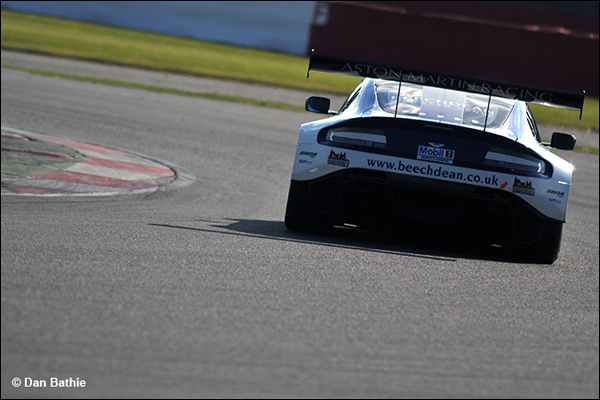 Olly Bryant took his, Ecurie Ecosse and BMW’s first British GT pole at Silverstone, beating off a Trackspeed Porsche assault for the honour. “It’s fantastic. We worked really hard on the car to give it a good qualifying set up. We knew we were good on old tyres for race pace, but we were struggling to match some of the others for overall time. It’s very useful for Marco, to start from the front and hopefully stay out of trouble. Delighted.

“For tomorrow, we need to push, stay out of trouble and stay inside the track limits. A lot of cars were penalised for that last year.”

“That was good, but not shiny,” reckoned Westbrook. “We’ve got good race pace and the car’s great in traffic because it’s got good power, at least. We’ll just keep doing what we do and stay out of trouble.” The Silverstone track was expected to suit the BMW though, a prediction borne out by there being three of the Z4 GT3s in the top seven.

Fastest McLaren was Duncan Tappy in 12th, 1.012 seconds from pole. It was not a good session for Audi, with the fastest R8 21st with Matt Bell; “It didn’t go so well, to be honest.” With one eye perhaps on the Indy 500, he explained the problem; “It goes through rights and lefts differently; it’s better through lefts. Which is a problem because there’s a lot of rights.”

GT4 qualifying proved to just as intriguing as its GT3 counterpart, with Ricardo van der Ende snatching P1 in the closing moments of the session in the #401 Ekris BMW M3 GT4; “That was very pleasing,” said the 1999 Formula Ford Festival winner. “I got hit by a GT3 earlier in the session, but fortunately the handling wasn’t affected and I was able to put together a smooth clear run at the end. There’s no better way to start the season.” 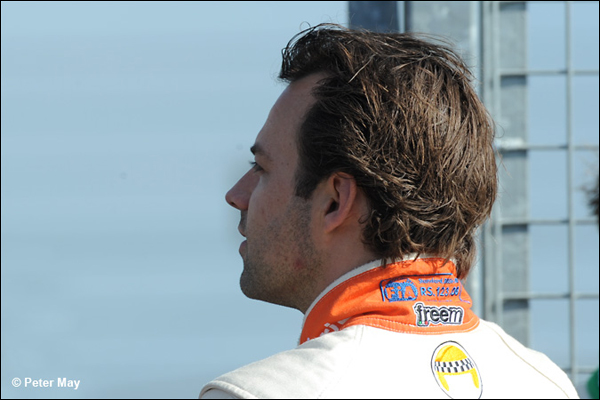 Several cars came close to challenging Viebahn’s time, but it stayed unbeaten for several minutes until Dan Eagling went top with a 2:15.208 in the #50 Redgate Lifetime Ginetta G50. As the session neared its conclusion, it looked more and more as though we would have a British team and car on pole, but with just a minute on the clock, van der Ende found the space to put together his best lap. All 47 cars made it through pole unscathed and have just a ten-minute warm-up at 09:00 before the three-hour race begins at 13:00.