The form book was thrown out as the Australian GT Championship went to Phillip Island for the third round of the season. There had been a few months break between Round 2 at Adelaide and Round 3, which would consist of two one-hour races; one held on Saturday and one on Sunday.

Erebus Motorsport entered only one car for young-gun, Jack Le Brocq, a much smaller presence than last round when they ran Porsche legend Craig Baird and ex-F1 driver, Christian Klien.

Dodge Viper returned to the field with Steven McLaughlan purchasing Greg Crick’s GT3 race winning car. The field had a couple of extra Ginettas and ex-V8 driver Jack Perkins (son of touring car legend, Larry). In all 17 cars would take the flag.

Round 1 had been taken by defending Champion, Klark Quinn – who looked to have adapted to the Pirelli tyres better than most in the GT3 Porsche – while Round 2 was all Erebus Mercedes. After missing the Adelaide round due to damage from Round 1, Maranello were back with their Ferrari 458 GT3 with Peter Edwards and John Bowe – and importantly with the 2013 upgrades. 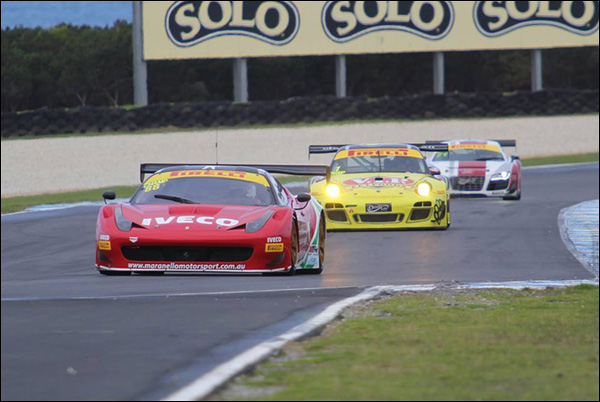 Bowe and Edwards reported that the car had more pace, in particular mid-corner speed – important with the long sweeping Phillip Island curves.

Erebus drafted in their young gun, with Le Brocq being part of their driver development program. Having only completed a couple of F3 races and Formula Ford, it should have been a struggle; but it wasn’t. From his first laps in the car, he was on the pace.

“It has fallen into place. It is a comfortable car – a great car to drive with all that horsepower. I had a great team preparing the car,” said Le Brocq. “We did about 30 laps of testing last Friday before coming down to Phillip Island, which was a great chance to get used to the car. It worked out pretty well in the end – the team has been great to work with.”

Klark Quinn, though, was on the opposite end – struggling for pace through the practice sessions and taking sixth in qualifying – but the first race was hindered by a tyre issue which meant he finished seventh, three laps down.

“The weekend didn’t start off so well,” admitted Quinn. “There is so much competition in this category. I guess early in the weekend I was just struggling with the Porsche and Phillip Island is not my favourite circuit, it never has been. I probably would have finished higher in the first race but I had a tyre blow out. I could have finished third or fourth without that tyre issue.”

The first race, though, was all about Le Brocq. The late afternoon affair ran into the dark on a chilly day. It was the first time that the cars had run on the new surface at Phillip Island and it all fell into place for the Mercedes driver. 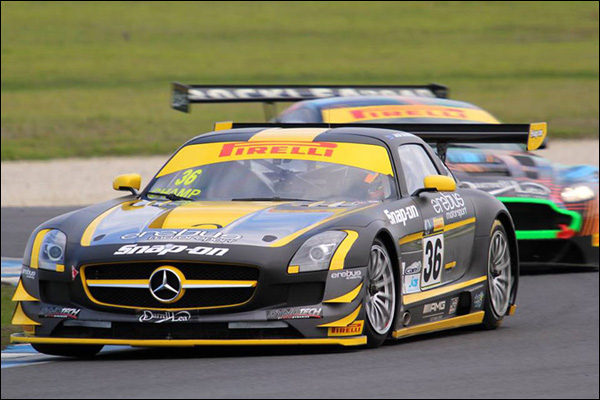 He led off from pole and took the fastest lap – 1:27.5; some 1.3 seconds faster than anyone else could achieve and smashing the old record (a 1:31), held by none-other-than Allan Simonsen.

Behind Le Brocq it was the unexpected figure of Tony Quinn in second. The Aston Martin driver, fully recovered from his massive Bathurst crash, was the best of the rest. He was in a battle with Roger Lago, whose Lamborghini also had to be repaired after Bathurst. They would both account for the Bowe/Edwards Ferrari, which after a strong start faded towards the end – again with tyre and setup issues.

The only major incident of the race involved Andrew McMillen in the GB Galvanising Lamborghini LP600, who spun at the last corner. At over 200km/h a trip into the wall was inevitable, but McMillen did well to keep the damage to a minimum – despite admitting to driver error.

The second race would be another walkover with Le Brocq taking the win by 43 seconds from Tony Quinn. 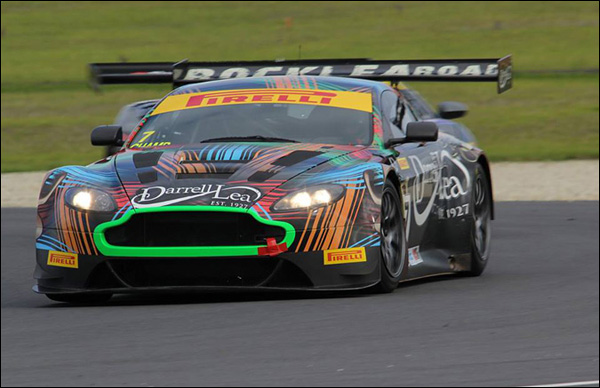 Lago would not be able to take the podium again in Race 2 after dropping oil pressure saw him shut down his Lamborghini engine and end the weekend at just after half-distance. His place on the podium was secured by Klark Quinn, who had recovered from his Race 1 tyre-issues and grip issues to join his father on the podium.

“I am really happy with how the weekend ended up; the Porsche/Pirelli combination worked well,” said Klark. ““The Phillip Island circuit has been resurfaced and is about two seconds a lap quicker and in a GT car it is phenomenal. It was really fun. To finish off third for the weekend was really great.”

Down the field, McMillen repaired his car and took fifth, a great comeback. After a tough first race for McLaughlan, where his Viper suffered issues with a left wheel spacer, he came back to take eighth in Race 2.

But it was all Le Brocq. He ran without issue and took another half of a second off his lap record – ending with a 1:27.1; a stunning debut for a man who John Bowe rated above any of the import drivers that Erebus raced last year – which included Bernd Schneider.

“The weekend was great – started off well with the qualifying lap record. I won both races by thirty and forty odd seconds. It was a great weekend and I loved the experience in the Mercedes,” said the youngster. “It is great to get the feedback from guys like John Bowe, who have done that and been where I want to go. With every lap I did I was learning the car more and more. I can’t complain about anything from the weekend!“

In the other classes, for the GT4 and Cup cars, it was the Ginetta G50 GT4 of Mark Griffith and Jack Perkins that took both races. Michael Hoven and Darren Berry/Keith Kasulke took the remaining podium spots in Race 1, with the Ginettas beating home the Porsche runners.

In Race 2, Griffith and Perkins again led the way from Hovey. This time, though, a Porsche led home a Ginetta, with George Foessel being the highest Cup Car. It was an unpleasant one corner for Kasulke, whose throttle stuck open off the start, but he managed to stop the car without damage.

Full results can be viewed here at http://racing.natsoft.com.au