Former Editor Malcolm Cracknell doesn’t get out much these days, but while the DSC regulars were fretting over consecutive weekends with GT entries at Silverstone of 45 – 55 cars, he pottered down to his local track, Brands Hatch, at the end of May at the invitation of Nigel Greensall, to (in theory) watch Nigel race a Lola T70 and a Shelby Mustang 350, in the Historic Masters Festival.

Nigel Greensall, Andy Wallace, James Weaver and I try to get together now and again for lunch, but our most recent event took an absolute age to organise: they’re three busy fellows, and whenever we set a date, one of them then had some racing-related event crop up and had to postpone. Eventually we made it though, in April (I can’t report any of our conversations – it was all off the record), and Nigel kindly invited my partner Sue and I to Brands for the Masters Historics Festival on the May Bank Holiday weekend. 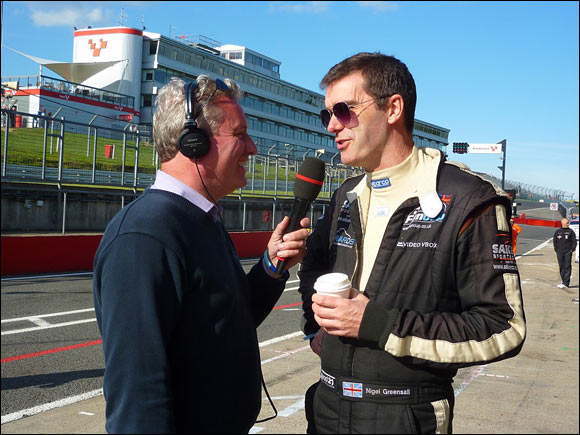 When Nigel said he was racing a T70, James made the point that driving one of those was like “sitting in a large cleavage – the front wheelarches are like two huge breasts”.

If you click the in-car video, below, you’ll see exactly what James meant!

Sue wasn’t terribly keen to go to Brands (oddly enough, that was the first place I took her 17 years ago, so we recreated our first ‘date’ – the lucky girl!), but had I been able to operate her iPad properly, I could have informed her that it was all Historics on the timetable: she likes old cars. 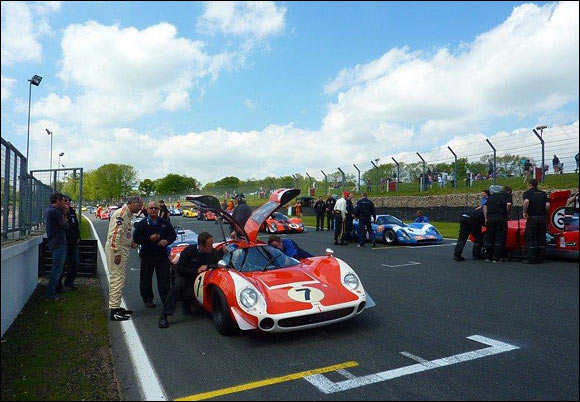 Summer finally arrived that weekend, although a strong wind and a hot sun eventually reminded me what it was like spending a day on the spectator banks: I was positively glowing by mid-afternoon. No media centre to shelter in for us.

Historic preparation man Simon Blake did have a large awning though, and there was the T70 – one of my favourite cars of all time – nestling alongside a Lotus Cortina and a Cobra. Simon made the point that such as the T70 are more reliable then ever they were in their day, thanks to modern materials and fluids – and excellent preparation. 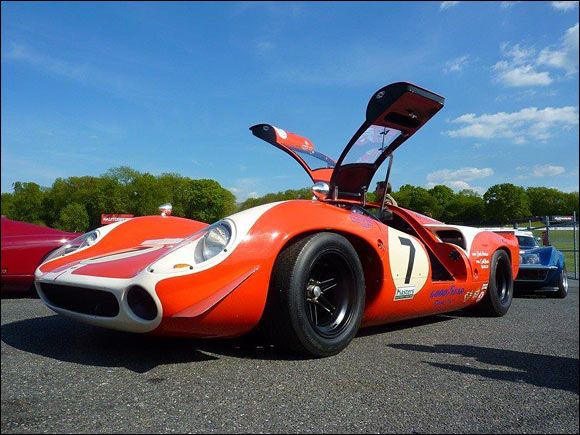 Nigel Greensall was discussing, with car owner Tarek Mahmoud, who would start the one hour race – and Nigel it would be. 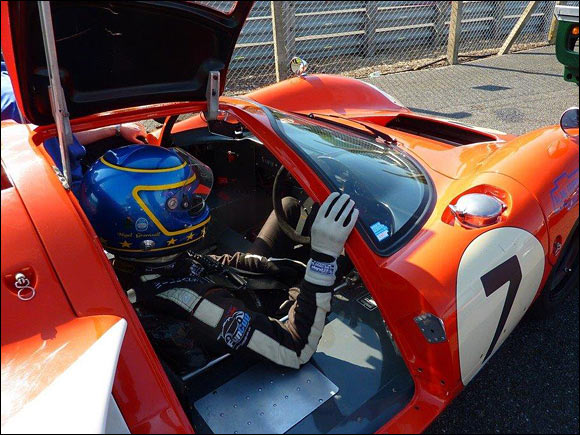 The Leo Voyazides / Simon Hadfield Mk3B was on pole, the B version comfortably quicker than the earlier Mk3, which Nigel had qualified fifth.

But he didn’t stay in fifth for long. The four laps of the in-car are well worth watching:

Voyazides was able to take it noticeably easier than our man, who was really leaning on it as he came past us at Paddock – and all the way round the Grand Prix track. Nigel’s fourth lap was into the 1:33s, and he kept the white Lola in sight throughout his 30 minute stint.

With Tarek having very little experience of the T70, his pace continued to improve through the weekend, Nigel was delighted that the Lebanese found a couple of seconds compared to his best in practice and the eventual seventh place finish.

What became very clear though was that both Greensall and Mahmoud took a very different line into Druids compared to everyone else. Nigel explains:

“I’ve been taking that line for years, and I’ve been teaching it to everyone I work with. Going up the hill, when I reach the bridge, I aim diagonally for the apex – it’s the shortest distance, shorter than staying wide and turning in late. I keep the front loaded up so it turns in really sharply. Then I’m off the pedals, the car starts to slide – and I come out of Druids with a nice bit of oversteer.”

It’s a quick line, and a very effective one for overtaking too, as you’ll have seen on the in-car, as the orange T70 dives inside Ewan McIntyre’s McLaren M1C. Nigel and partner Nikki are agents for the Video VBOX in-car system, and if you go to Nigel’s website – www.nigelgreensall.com – you’ll find numerous in-car examples of Nigel’s expertise at driver coaching. He’s not just quick at Druids / Brands Hatch…

He and Nikki have invested in a Toyota GT86 as part of Nigel’s driver coaching, and in the week before the Brands Hatch meeting, they were at Dijon with that car – and then on to Spa.

Following Brands, Nigel was driving Lamborghinis at Imola, then headed to Paul Ricard (via Monaco) for the VdeV meeting – and followed that with more driver coaching at Silverstone in a couple of Caterhams. He’s a very busy chap!

He was racing at Ricard in Benton Bryan’s Corvette, a car specifically built for VdeV GTs. 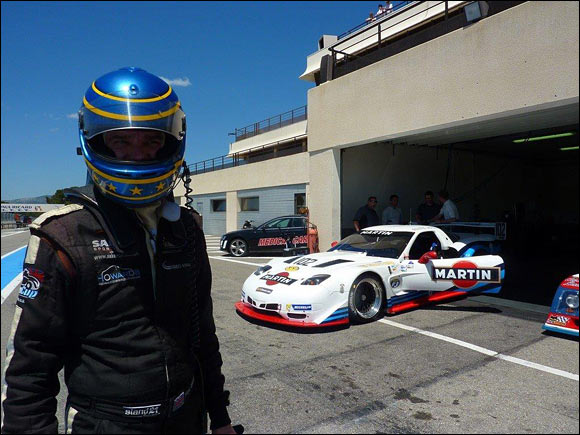 “I qualified third against the latest 458s, R8s, GT3 Porsches and SLS Mercedes, and ran with a JMB Ferrari and an IMSA Porsche in the race. Very satisfying.” 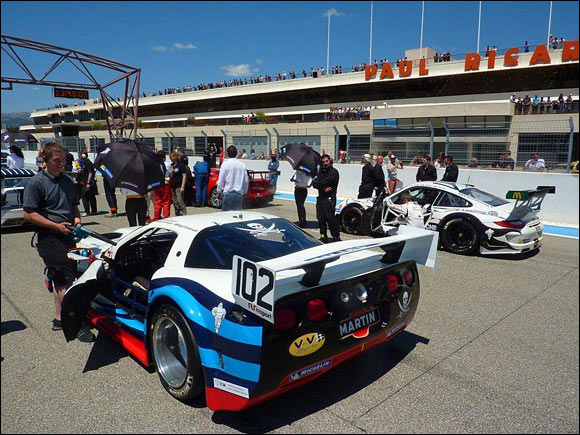 Benton and Richard Bryan shared their Chevron B36 at Ricard, this one an ex-Le Mans car from 1976. They raced home to a very strong second place. Nigel has probably taught them some special lines around Ricard.

Nigel is so active on the race tracks of Europe, it’s difficult to keep up with everything he does. He’s also been known to pop over to Dubai for work there too.

Getting back to the Brands Hatch meeting, the Mustang outing was less successful, the car suffering from a fault with its radiator, and Tarek Mahmoud had to park it to avoid engine damage. 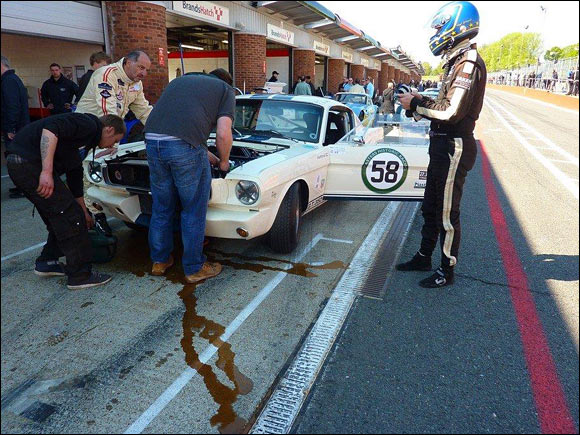 I make that seven race tracks in a little over two weeks for the Greensall coaching and racing academy: is any driver on the planet busier than that?

Former GT man Keith Ahlers was also racing in the Historic Masters event in Kent, in his gorgeous Cooper Monaco – “the oldest car in the race” – while another T70 was in the hands of Chris Beighton and Jon Finnemore. That featured the same orange livery that decorated their British GT Marcos a decade ago, while Chris Goodwin was hammering round in a McLaren M1B, in the same bright red helmet that he used when racing James Munroe’s McLaren F1 GTR at the end of the ‘90s.

Just to complete a perfect day out, Sue was amused to discover that AC/DC’s Brian Johnson was racing a GRD S72 against the Lolas, McLarens etc. She apparently went out with the little Geordie lead singer many decades ago – but didn’t think it worth going to find him “because he probably wouldn’t remember me”. One of many, I imagine… I was amused that he was penalised with a stop-go for a driver indiscretion…