After a busy weekend, a very busy day of track action and an overnight trip back to the UK it’s time to take stock of what we have learned:

In LMP1 there was plenty of food for thought – Loic Duval had one of those days – From a driver error that left the #2 Audi needing a thorough re-fettling to a final session lap of jaw dropping pace and commitment that saw the pole position time from 2012 fall. 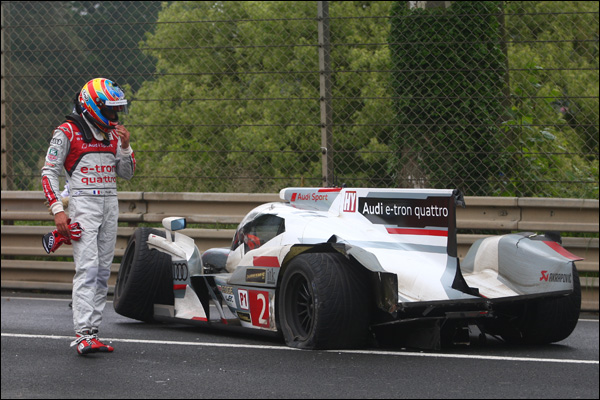 His task was part redemption for the earlier faux pas, and part psychological, to send the Toyota team back to Cologne with more questions than answers –  The boys from Cologne though are a resilient bunch and the gap at the end of the 8 hours of track time yesterday likely flattered the Audis.

That’s not to say that the Toyotas will arrive back at Le Mans next week with the expectation of dominating proceedings.

In the highly changeable conditions it seemed at times that the factory Toyotas struggled to match the efforts of the Rebellion Lola Toyotas, was the rear drive only hybrid system on the TS030s causing issues with traction, or is it simply the case that the team’s new 2013 cars (both of which were present at the Test) need more on-track time to squeeze the best out of the package. 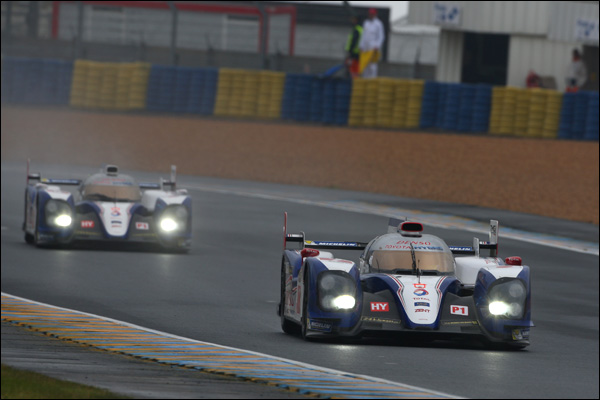 The Audis seemed to have things well in hand though, all three 2013 spec long tail cars lapping quickly with some impressive fuel mileage being delivered too it seemed – There was certainly no sign of sandbagging from Audi!.

Rebellion had another excellent run after impressing mightily at Spa, the whole team buoyed by the final confirmation of their new car for 2014.  For now though the Lola Toyotas look pretty darned convincing, Neel Jani making the best of the conditions as the track started to dry to briefly top the times overall on wet rubber in the #12 car. 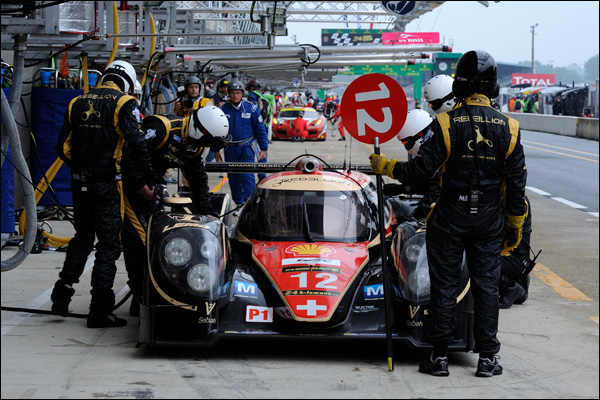 Strakka couldn’t, or wouldn’t match that pace in their HPD but left the test expressing satisfaction with a job list substantially completed – They will be looking to get their season back on track in a fortnights time and there’s no shortage of effort from the All-British team in addressing the task in hand. 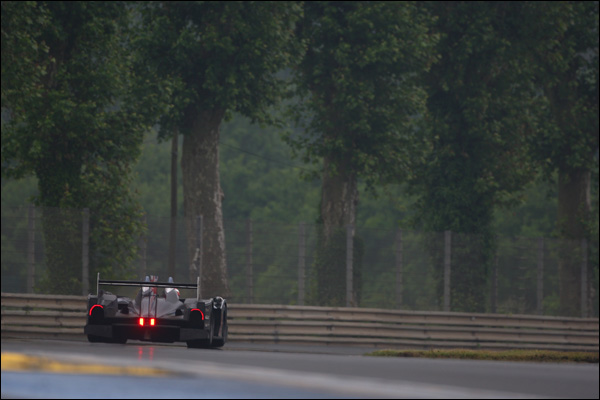 The final LMP1 runner was one of five cars present at the Test Day that are not programmed to compete in the race proper.

Marco Bonanomi peddled the #4 Audi, another long tail car, for an important test with Michelin featuring 2014 spec narrower rubber – See below for a very clear comparison between the #4 Audi’s tyres and the current spec. 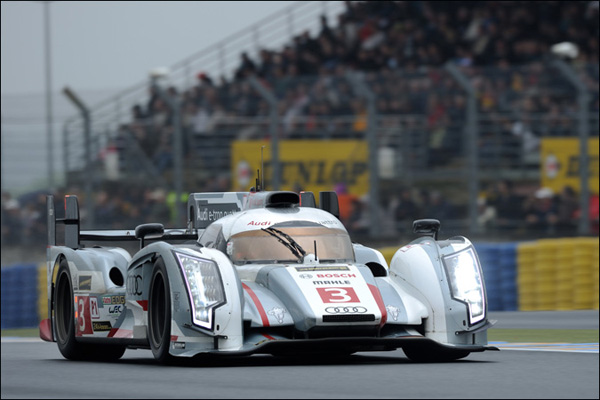 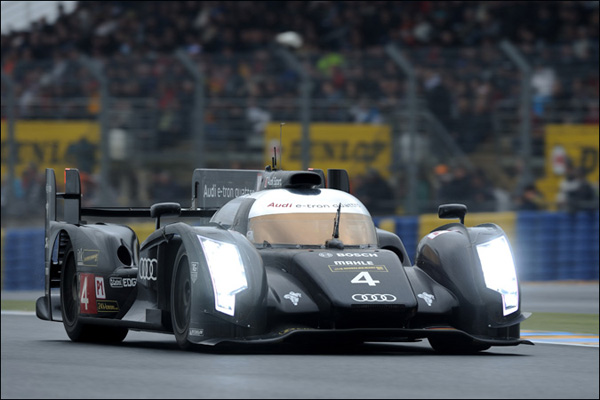 It wasn’t just about pace (bet it did run very well up the order), and there was precious little information available on what the team, Michelin and others would take from the test, the car housed not in the pit garages but instead in its own awning in the area usually used for parc ferme from where media were barred.

LMP2 saw no fewer than 24 cars running, including all 22 cars set to race in a fortnight’s time.

So what did we learn here?

We learnt that the Michelins seem to have a real edge in very wet weather, but that they have a fairly narrow window of superiority as the track dries, and that the Dunlops look to have the edge in almost all other conditions, getting drier, getting wetter, and in the full dry!

That said there were some stand-out performances during the day including the returning Tristan Gommendy in the Alpine Nissan, the Frenchman using his Michelins in the wet to good effect and banging in a lap that was, for some time, a clear 6 seconds faster than any of the opposition. The second (Test Day only) Alpine was impressive too, Paul-Loup Chatin has already impressed this season in LMPC in the ELMS and he finished the Day third fastest in class.

It was another Frenchman, in a different car, that finished the day on top though as Olivier Pla found a lap that was designed to put down a marker for the race proper in the eyes of the competition.  The lead #24 Oak Racing Morgan Nissan finished the day top of an impressively widespread tree.

But the Morgan and Alpine weren’t the only contenders to show real form, Delta ADR’s pair of Oreca Nissans both impressed too, Mike Conway and Archie Hamilton showed real pace (and Hamilton did it without the benefit of his race winning grandfather’s lucky orange – Dad Adrian left it at home by mistake!)

The leading pack features not only some top pro talent but impressive pace from their gentleman drivers too – the efforts of Alex Brundle, Bertand Baguette, Martin Plowman, John Martin, Maxime Martin, Brendan Hartley, Tom Kimber Smith and Michael Krumm were predictably impressive but no less so than the likes of David Heinemeier Hanssen, Simon Dolan, Ricardo Gonzales, Mark Patterson and Eric Lux – LMP2 could well end up as the battleground for the team with the fastest and most consistent gentleman!

There was trouble though for a number of teams, in particular the Lotus LMP2 squad whose steady progress was interrupted by a big shunt for Dominik Kraihamer in the Porsche Curves, Kraihamer was fine, the Lotus though will need a big repair in the next two weeks.

There was trouble too for the Jota Zytek Nissan, Simon Dolan posting a very impressive time in tricky conditions but hitting trouble (and the #45 Morgan Nissan of Jacques Nicolet) on the next lap.  The Englishman immediately apologised for an overly ambitious manoeuvre, the Oak team were last seen packing the car away for repair, and to fit the car with its ‘Art Car’ bodywork for the race proper.

Whilst the #42 Greaves Motorsport trio of Michael Krumm, Lucas Ordonez and Jann Mardenborough had a good Test Day, the Caterham Motorsport branded sister car had a little less success, Alex Rossi seemed to find the task in hand a tricky one and certainly never looked close to matching the pace of Tom Kimber Smith. 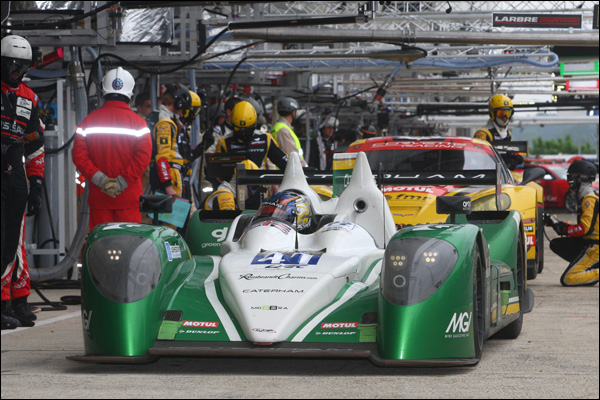 The fact that the car is here, and that Caterham are clearly looking very seriously at the LMP2 (and possibly LMP1) marketplace is very good news indeed.

Others had a quieter but no less constructive day with the KCMG Morgan Nissan team again impressing after a fine showing at Silverstone’s WEC round.  HVM’s Lola Judd looked splendid and the polish of the car was matched in the garage as the Canadian flagged but British based team look to get their delayed start to the season on track.ad

The second additional test Day entry was a second HPD for Level 5, Piers Phillips was back at the scene of his greatest triumph with ex-employers Strakka and was keen to emphasis that the day wasn’t about pace at all, Ryan Briscoe and Marino Franchitti shared the #33 car with Briscoe completing his ‘rookie’ laps with ease.  Scott Tucker meanwhile utilised the sister #44 machine – As Piers said the day wasn’t about pace but rather about set-up and preparation – If Level5 aren’t on your list of potential winners then it needs a re-draft!

GTE Pro saw Ferrari, Porsche and Corvette all spend time at the top of the class  timing screens before the Aston Martins moved to dominate proceeding at the end – the top six were separated by less than a second as the checkered flag flew to end the day and this could very well be the battle to watch.

Ferrari’s charge was blunted by a fumble of the car damaging variety mid session from Giancarlo Fisichella, the ex F1 man overcooking his exit from Mulsanne Corner after having just set the fastest lap time in class at that point by a distance – The damage to the #51 car though ended their day and Kobayashi and Vilander’s efforts in the sister car still left the 458s behind both Porsches, both factory Vettes and all three factory Astons.

The Vipers came into closer contention as the conditions improved but the SRT team have work to do with their still very new package to get onto terms over a stint and race distance. 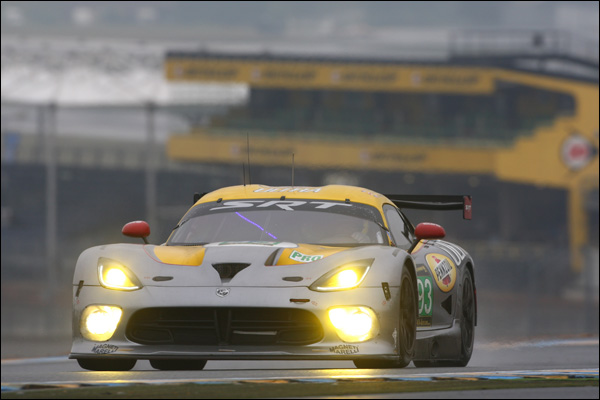 Conditions again seemed to play a major part in the relative strengths and weaknesses of the major contenders here too as we moved from period where marque after marque briefly took control before being overhauled,

At the end of the session though it was all about Aston Martin, and it looked like Fred Makowiecki would end the day on top until Peter Dumbreck snatched the bragging rights from the sister car’s grasp on his final flying lap.

There was a similar last gasp change in order in GTE AM too, and again it featured a pair of Aston Martins as Jamie Campbell Walter overhauled the very impressive efforts of Alan Simonsen in the final minutes of the session. 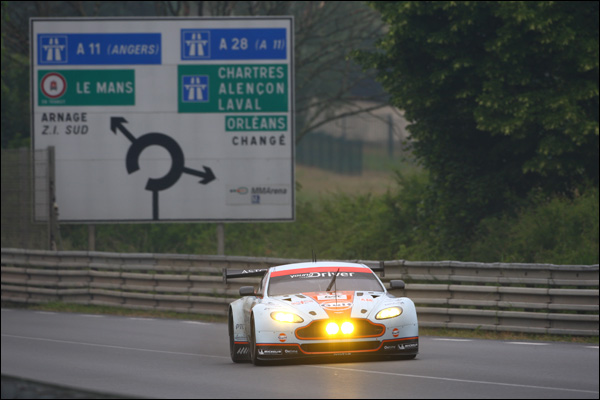 The Danish crewed Vantage had been utterly dominant for almost the whole day, several times putting 4, 5 or 6 seconds on their nearest class contenders and figuring prominently in the overall GTE order in the process.

All five Am class Porsches ended the day in line astern on the timing screens next up with the Dempsey-del Piero – Proton #77 car third fastest, though a full 3seconds and more back from the #96 Aston with the other Porsches adding a further two seconds to the gap before the screens reached either the Larbre Corvettes and the quintet of Ferraris.

Tracy Krohn was another man to suffer a substantial hit during the day, the damage eliminating the #57 Ferrari for the remainder of proceedings after an incident which saw the car hit the barriers on the outside of Mulsanne Corner heavily.  The Texan though was unharmed.

The final pair of cars on track were both LMPC Orecas fielded by the car maker’s Team Endurance Challenge outfit and whilst they won’t be back in a fortnight’s time they did make a contribution to one of the remaining raisons d’etre for the Test Day as several drivers took the opportunity to complete the 10 laps for the full circuit that every competitor must before being allowed to sign on for the race proper.

Nico Verdonck was a notable name on their team sheet as other teams too took the opportunity to give additional drivers the same opportunity including Jonny Adam at AMR, the Beechdean AMR regular now a full factory driver.