14 cars make up the final category for the 2013 Le Mans 24 Hours with Aston Martin, Corvette, Ferrari and Porsche all represented in a class where the machinery must not be to the current year’s specification and the crew must be strictly Pro- Am ( or all Am).

Le Mans aces Larbre Competition are back again with a pair of Corvettes as Jack Leconte’s team look to make it four class wins in a row and all three GTE Am wins since the class’s inception.

That’s a staggering record with Julien Canal, driving again in the #50 car looking for his own personal 4 in a row, the Frenchman having been with Larbre for each of the current winning run! 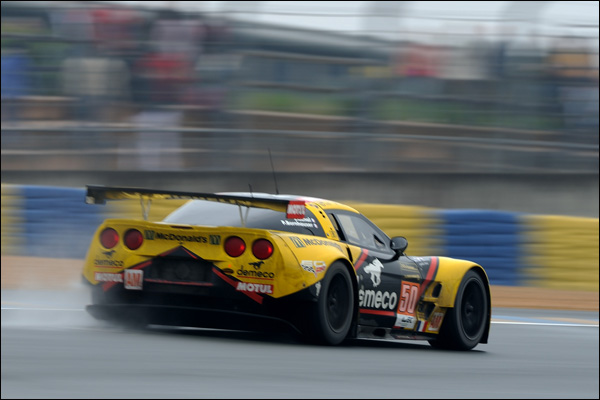 Canal is joined by safe pair of hands Patrick Bornhauser and Chevy factory man Ricky Taylor ( brother to Corvette factory driver Jordan). The team’s record, and the record of the Corvette in this class, speak for themselves – Definitely one to watch, as is the sister #70 car, though the driver line-up in the second Corvette looks rather less pacey as a package

Porsche pride is upheld in this class by five 911s, and whilst all five could be to full 2012 997 GT3RSR spec it seems that only one will take that option with the remainder running the older 2011 spec cars.

IMSA Performance will have one of each with both their WEC and ELMS season entries on the start list here. 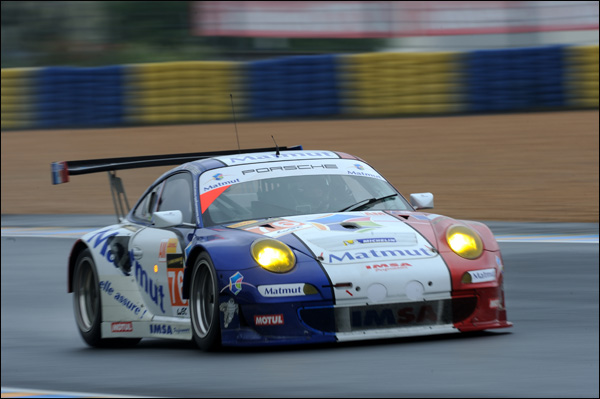 The #67 car is the older machine, reportedly easier to set up and with a wider operating envelope. Porsche factory driver Wolf Henzler will be the star quality here alongside a pair of gentleman drivers – Look out too for a subtly beautiful pearlescent French tricolour livery on both cars.

The #76 car is the 2012 machine sees team boss and rapid gentleman driver Raymond Narac enlist the support of ex Peugeot reserve driver Jean Karl Vernay but in truth the car has seemed, thus far less than the sum of its parts – Le Mans though is a whole different ball game.

Proton Competition field a pair of cars, the #77 car for Dempsey del Piero Racing and a car for the core team too running as #88. 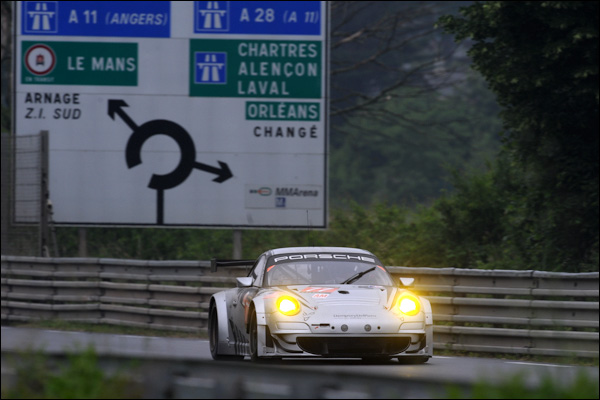 The #88 crew features no superstar drivers, though Paulo Ruberti still reminds race watchers that he has real pace – Team boss Christian Ried and successful privateer Porsche racer Gianluca Roda complete a well matched and contented trio – You can bet on this team having a steady, unremarkable and potentially very successful run!

Prospeed got a last gasp call up after the GreenGT effort imploded leaving Garage 56 an empty space. Manu Colard gets the call up for the #75 car and looks set to start his 19th consecutive Le Mans and goes hunting for a third class win. In truth that’s an outside bet with a pair of gentleman drivers alongside him on the entry, but stranger things have happened at Le Mans 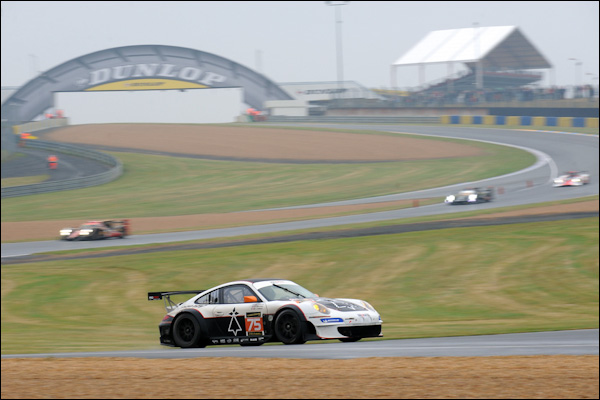 Ferrari are represented by five cars in GTE Am, four of which are fielded by AF Corse! The first is for customer team 8Star Motorsport, the team set up by Venuzuelan racer Enzo Potolicchio after winning the LMP2 title in last year’s WEC (and at Le Mans) with Peter Baron’s Starworks outfit.

He’s joined in the all orange #81 car by AF Corse favoured driver Rui Aguas and V8 Supercar regular Jason Bright to make up an intriguing trio. The car is quick, the drivers are individually quick – if this effort gels it could be a real contender.

AF Corse themselves field no fewer than three cars though in truth the white and blue #54 car can be discounted as anything other than an effort to get to the finish from three plucky gentleman drivers. 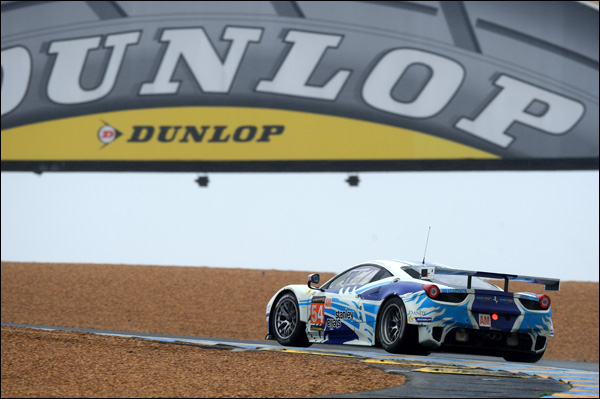 The #55 car has a more convincingly experienced line up but is still not likely to be a real contender for overall honours, Darryl O’Young might add some pace to the efforts of Lorenzo Case and Piergiuseppe Perazzini, the Italian gentleman driver will be hoping for a rather less dramatic Le Mans than his 2012 run which saw him tangle with Anthony Davidson’s Toyota, the Ferrari ending up upside down at Mulsanne Corner.

AF’s #61 car is their most realistic chance of racing success in the class, the red car with South African colours along the flanks marking Jack Gerber’s backing of this effort. He’s the gentleman driver for this one and races with Irish racer and multiple race winner in GTE and GT3 Ferraris Matt Griffin and another of the Ferrari factory roster of customer support drivers Marco Cioci. If Gerber can stay on the grey stuff and out of trouble, the two Pros could shine.

Krohn Racing return with their very green 458 for the full WEC with team owner Tracy Krohn again on the driver roster alongside regular Pro driver Nic Jonsson and new 2013 signing Maurizio Mediani. This is a team that’s knows how to finish Le Mans and how to finish on the podium too, to do it this year the boss needs to stay error free and the whole team put of trouble. 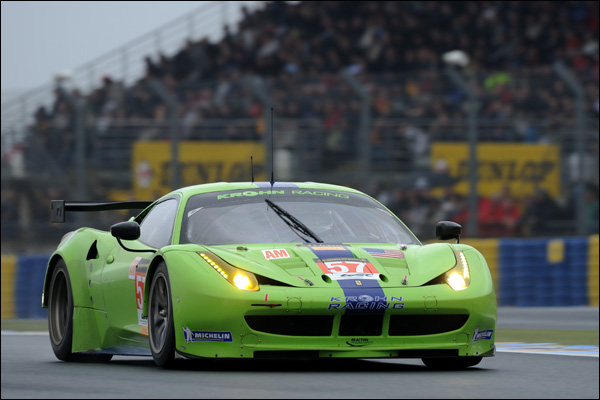 Aston Martin make no bones about their objective in 2013 , they want to win everything in celebration of the company’s centenary.

And the pace and form of the two Am class Vantages looks set to have at least one of their cars start as favourite here.

The all Danish crew in the #95 car looks a very good prospect, dominated the timing screens at the Test Day (until Jamie Campbell Walter got involved) and has a driver line- up that’s tough to fault. 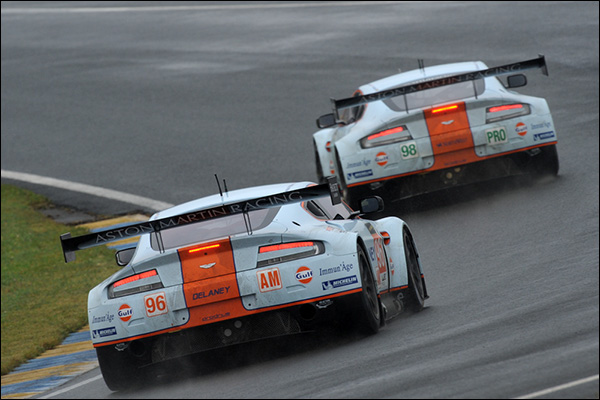 When your gentleman driver has WTCC podium finish form and an LMP2 class win at Le Mans then you know you are doing something right – Add in the impressive Christoffer Nygaard and the hugely quick Allan Simonsen and the reasons to look well upon this effort shout ever louder.

The sister #96 car sees gentleman racer, car collector and enthusiast supreme Roald Goethe bring along his British mates Stuart Hall and Jamie Campbell Walter. JCW topped the times at the Test Day, Stuart Hall was quick too but this effort will all be about how well Roald Goether gets on with the task in hand.