12 cars, 5 marques, top drivers, factory teams, if you aren’t keeping an eye on this little lot then you are likely to miss some of the best racing out there.

The Dodge Viper, in its earlier iteration, dominated the GTS class at the turn of the century, fast forward two further evolutions of the V10 engined Supercar and the Snake is back. 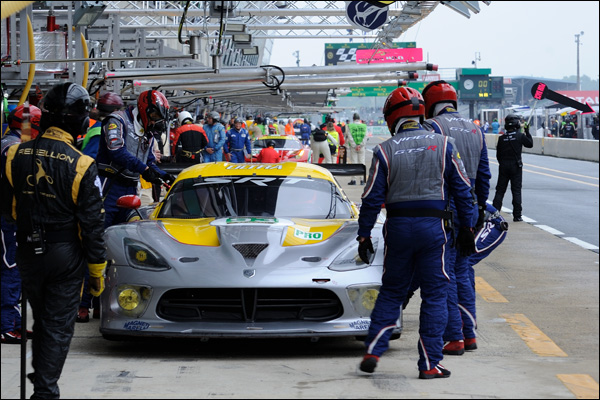 SRT Motorsports, under the guidance of Bill Riley, bring a pair of their new cars to Le Mans for the very first time. They should be quick, they should be suited to the wide open spaces at Le Mans but this may be a year too early for them to shine.

With one car crewed by European talent, quick Scot Ryan Dalziel, Germany’s Dominik Farnbacher and Belgium’s Marc Goosens, and the other crewed by a North American mix of US racers Jonathan Bomarito, Tommy Kendall and and Canadian Kumo Wittmer, there will be no shortage of effort, but the glorious V10 bellow may not be enough just yet.

Corvette Racing are back for another crack at the big one, the second two car US factory team arrive with more form, more experience, more success and more resource than the Viper boys but they need to turn around a streak of bad luck that has seen a string of one- off failures plague their Le Mans efforts in recent years.

That said there is little lacking on the driver front, the #73 car rosters Jan Magnussen, Antonio Garcia and Jordan Taylor for a bewitching brew of youth and experience.

The #74 car meanwhile sees a pair of fast Brits, Oliver Gavin and Richard Westbrook, joined by the talented American Tommy Milner. Pit your hopes behind either crew and you are unlikely to feel let down by the effort. 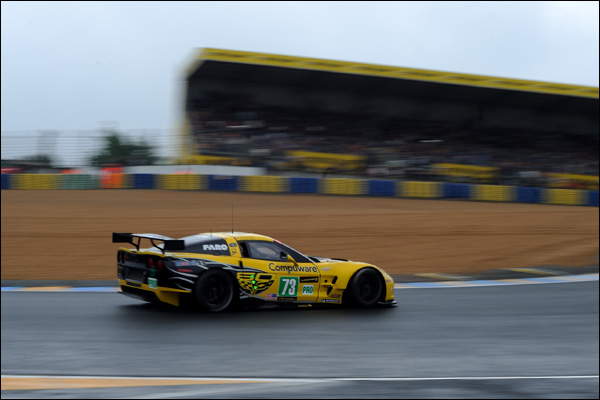 Add to all of that the resources, technical and human, of one of the best teams in the pit lane and Corvette should be able to exploit and chance that emerges for them.

Onto the European contingent and first up is one of the most significant new additions to the grid this year. Porsche AG Team Mantheqy is, for the first time since 1998, a pukka Porsche factory effort here.

And in the 50th Anniversary year for the iconic Porsche 911 they are bringing a brand new version of the car to take up the challenge, the 2013 911 RSR is based on the new ‘991’ iteration of the world’s longest lived sportscar.

There are no half measure in the driver line-up either, all six men come from the factory roster, Patrick Pilet and Jorg Bergmeister are joined at Le Man by previous overall race winner Timo Bernhardt in the #91 car, Timo and #92 driver (and fellow overall race winner) Romain Dumas both making their last planned race appearance this season before concentrating on the development of the factory’s 2014 LMP1 contender. 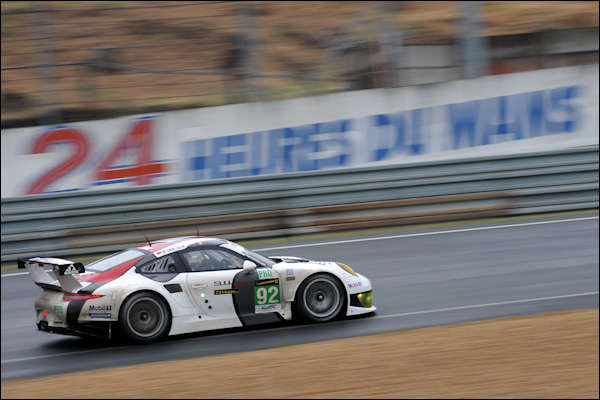 Dumas meanwhile is joined in the #92 car by Marc Lieb and Richard Lietz.

Prospects? Well all the ingredients are there, but the speed so far is not, are Porsche in trouble, or have they been playing a highly tactical game? We’ll soon find out!

There are a trio of Ferrari 458s on the GTE Pro entry from a pair of very different teams – JMW Motorsport epitomise the pride of the privateer, they have retained their Dunlop backing, and that could pay dividends if the weather intervenes.

They are another team celebrating a significant anniversary this year, their Art Car livery commemorating an astonishing 125 years of Dunlop. 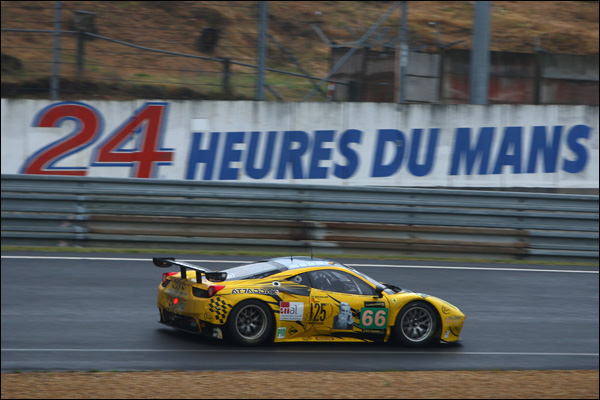 In the driving stakes Andrea Bertolini bring a factory-blessed dash of rapidity to proceedings. The Italian is joined by Saudi Prince Abdulaziz Al Faisal, a successful racer in the Gulf and an increasingly familiar face in European GT racing circles too, and UAE driver, and previous Dubai 24 Hours winner, Khaled Al Qubaisi.

It’s an unconventional line up, and likely won’t have the race long pace of the factory backed cars, but all three drivers are capable of bringing the #66 car home at pace, their result might be determined by the efforts, or issues of others.

AF Corse have a massive presence at Le Mans this year and two of the seven cars they are running will co test the Pro class.

‘Factory Blessed’ is probably the most accurate descriptor for Amato Ferrari”a acronyms ally monikered squad and that means the team’s Ferrari 458 Italia’s are as good as they get, bolstered to no small degree by a star studded driver line up.

The #51 car sees the now well established, and 2012 WEC title winning, pairing of Gianmaria (Gimmi) Brunin and Giancarlo Fisichella continue into 2013. They are joined by the less well known but, trust me, equally pacey Matteo Mallucelli. 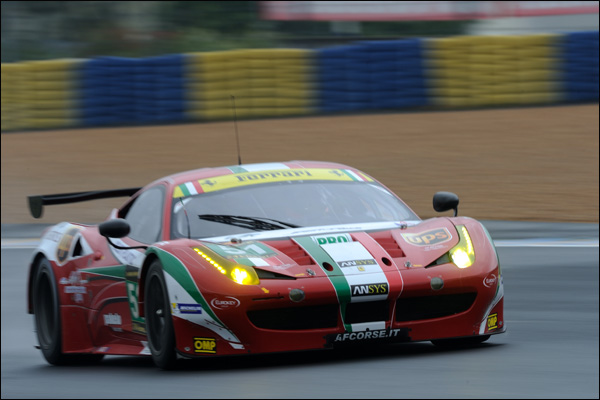 The car looked the fastest of the Ferraris at the Test Day and topped the times until Fisichella suffered a car damaging shunt that ended their day. In a field as packed with quality as this one is that’s the sort of mistake that could cost a team the opportunity for a win.

The #71 Ferrari meanwhile features one of a pair of new refugees from Formula One to join the GTE grid – Kamui Kobayashi arrived with a reputation as a real racer, has made the transition to the GTE Ferrari very quickly and has impressed mightily thus far.

A 24 hour race is a different skillset again though and it will be interesting to see how the fan favourite adapts. He joins His season partner Toni Vilander once again, the understated Finn has been a very effective wise head for successive ex F1 men to interrogate and looks to be doing much the same again – Add to that his reputation as one of the fastest men in a GT car around and the pairing, unsurprisingly, have the #51 crew looking nervously over their shoulders.

Olivier Beretta completes the Ferrari lineup, the Monagesque working hard to blow away the memory of his rejection by the factory Corvette crew 18 months ago. He has matchless experience at this level and can make a telling difference to the prospects of this team if the pace turns up on the day.

Finally there are a trio of cars from the Aston Martin Racing team.

The V8 Vantage GTE was the class of the WEC field at the end of last season and could have won Le Mans too had it not been for a relatively minor off for the lead car.

The 2013 Vantage though takes a further mighty leap forward and in Aston Martin’s centenary year the gameplan is obvious, the Boys from Banbury are here to win! 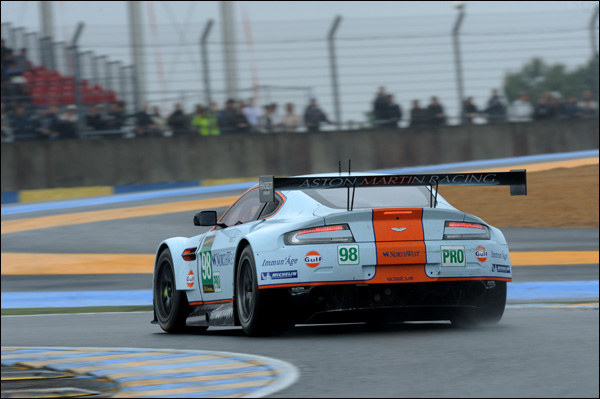 The #97 car features a trio of rapid wheelmen, led by AMR’s longest serving driver Darren Turner, still amongst the quickest GT racers around. His full season partner in crime is Stefan Mucke, the German also blindingly quick but with a minor tendency to make the odd error here and there (don’t we all!). Peter Dumbreck completes the trio making a very convincing case for putting this crew on the (quite lengthy) real prospects list. The car will also feature a Gulf based Art Car competition winning livery – It will be hard to miss!

The #98 car comes courtesy of Canadian racer Paul Dalla Lana whose backing has enabled AMR’s John Gaw to deliver on the dream of a fifth car here. The privateer racer joins the factory squad then and brings with him a pair of very experienced team-mates, Pedro Lamy who has won major races with several factory teams.

Another man with plenty of factory team form is surprise signing Bill Auberlen who has been released by his long term employers BMW for a one-off. Auberlen is another top drawer player and if Dalla Lana can stay on the lead lap this could be a dark horse effort if others hit trouble.

No such qualifications are needed for the #99 car’s prospects, the third Pro Aston has talent aplenty on tap. Rob Bell has been released by McLaren for this one off run in the rival AMR camp, the affable Geordie remains a world class act and he knows the basic Vantage package well.

Bruno Senna is the second recent F1 refugee in GTE Pro and he’s settled into the task even better than his Ferrari rival. In fact he leads the World Championship courtesy of strong performances in two different Astons in the first two rounds of the WEC. that’s no fluke either, the Brazilian is rapid and, so far, error free.

The Ace in the hole thou could well be Frederic Makowiecki, the Frenchman was a hot property in the off season and his confidence in signing for AMR speaks volumes for the prospects here. The big and rumbling V8 in a pretty, pretty car with Gulf livery, a ready made fan favourite might well win this race!