After the truncated free practice session, and extended dinner break, the teams were keen to get back out onto the track and make the most of the last of the fading daylight. At ten o’clock the pitlane opened, and a long stream of eager drivers steered their cars out onto the circuit.

The #41 Greaves Zytek was not among them. The Caterham-branded car was still being repaired following Eric Lux’s contretemps with the barriers in Free Practice. A new engine had been fitted, but the decision had been taken that the car would not run again on Wednesday.

Also confirmed as a non-runner was the Krohn Racing Ferrari F458, #57. Tracy himself had been seen tucking into dinner at Vanessa’s, although he’s sure to have a few aches by the time he wakes up on Thursday morning. The true extent of the damage to the car isn’t yet clear, but the team will be working hard towards a full rebuild ahead of Thursday’s qualifying periods.

Within five minutes of the session kicking of, the leaders were already throwing down gauntlets to one another. A remarkably swift 3:23.169 came on Loic Duval’s second flying lap, and moved the #2 Audi R18 straight to the top of the screens, and he followed that immediately by a 3:22.349. It was impressive stuff, and two seconds better than Marc Gene could manage – at that stage – in the #3. 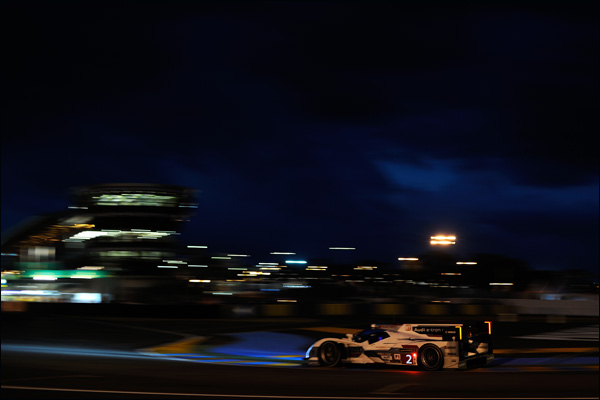 Yellow flags through Dunlop, with the #97 Aston in the gravel, curtailed various early runs, although not before Nakajima had posted a new best for a Toyota of 3:26.676 to stand third. 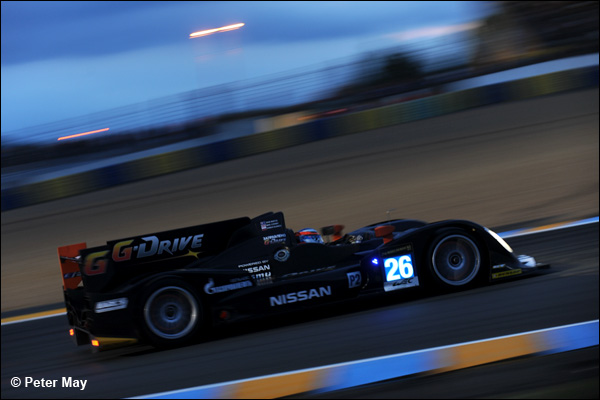 In LMP2, as the darkness continued to descend, John Martin held the provisional top spot for the #26 G-Drive Racing Oreca Nissan, just over a second clear of Olivier Pla in the #24 Oak Racing Morgan Nissan. Third up was Frank Mailleux aboard the #43.

It was fairly evident as the session moved past fifteen minutes that teams were pushing hard for quick times in the opening moments of the first evening session. The weather forecast for Thursday hadn’t looked good, and times set in this first dry session could prove telling.

In GT, the Pro category was being lead by Stefan Mücke in the #97 Aston. He’d followed up this scintillating lap by going for that yellow flag excursion at Dunlop, demonstrating, if anyone doubted it, that he’d been pushing hard. Not hard enough, though, because Mücke’s best of 3:56.146 was not to stand unchallenged for long. Gianmaria Bruni came through just minutes later with a 3:56.909 for AF Corse’s #51 F458. 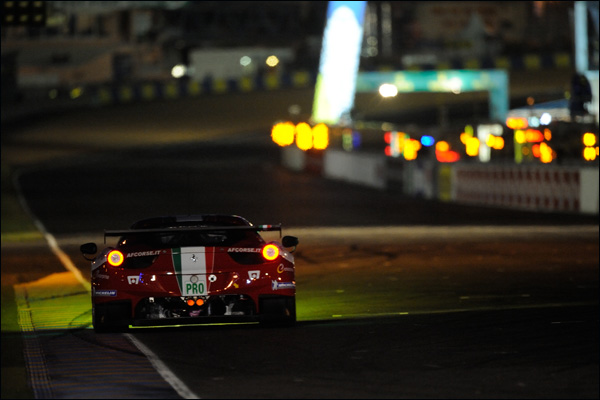 Initially, the way was being shown in the Am class by Paolo Ruberti in the #88 Proton Competition Porsche, instantly making up for what must have been a frustrating practice session. However, that frustration must have been piqued somewhat when Allan Simonsen posted a 3:58.661 to move ahead, but that left a sizeable gap back to Pascal Gibon holding third for IMSA Matmut’s #67 Porsche. 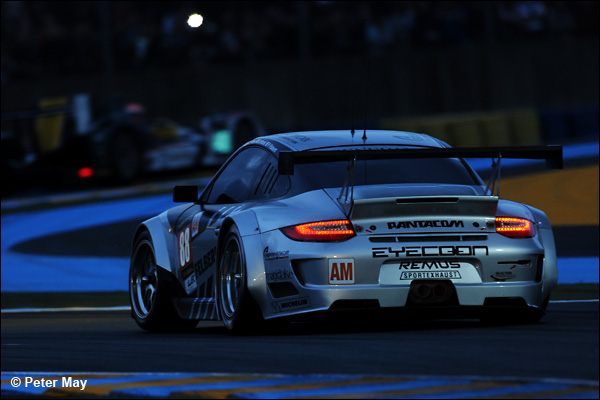 Late to join the party was Strakka Racing, but Danny Watts set the HPD’s first time with 25 minutes gone. The #70 Corvette, giving the barriers at Ford a gentle nurf, was cleared away and taking a short cut back to the pits in time for Watts to come through with a modest improvement second time around, but enough to clear the entire P2 field and slot in 8th overall.

With half an hour gone, André Lotterer slipped in a quick one for the #1 Audi R18 to make it a one-two-three for Audi. That left the lead Rebellion Lola, the #12, in a Toyota sandwich between the #7, fourth, and the #8, sixth.

Making improvements in P2 was Frank Mailleux, shaving off a few tenths to ease into second, ahead of Alex Brundle, with Archie Hamilton holding fourth place for the second G-Drive Oreca, the #25. 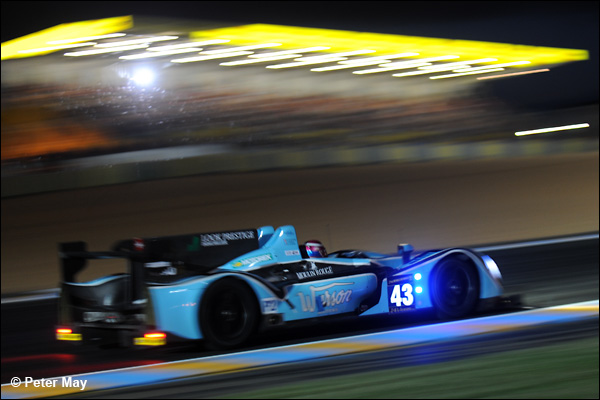 A major improvement came in GTE-Pro at 10:47, with an impressive gain to set a 3:55.658 from Fred Makowiecki in the #99 Aston Martin Racing Vantage V8, eclipsing Giancarlo Fisichella by a modest, but potentially vital, two-tenths of a second. Third in Pro with forty minutes gone was the second Aston, the #97 with the two-tone bodywork. There had been no change at the pointy end in GTE-Am, save a few driver swaps. 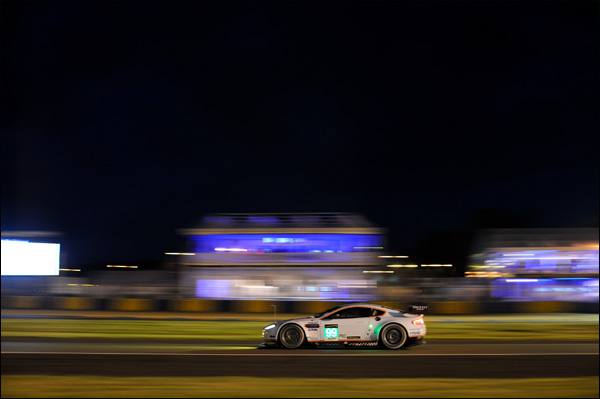 Fast times aside, the early period of the session was fairly uneventful, but that all changed as the session moved towards 45 minutes with drama as Sébastien Buemi coasted the #8 Toyota to a halt a few hundred yards after the Arnage corner. Buemi parked the car on the side of the track, and there it remained.

Toyota’s troubles aside, the session had settled down into a steady rhythm. The best chance for fast times had passed and teams were focused on ensuring that all their drivers completed their requisite night laps. Few, if any, were posting ‘blue sectors’ and there was hardly an improvement posted. The two notable exceptions were Karun Chandhok, gathering pace during his first stint in the #48 Murphy Prototypes Oreca #48, and the #32 Lotus, which had emerged after having its various purloined components refitted successfully at just before the hour. The full implications of the court case, held in Le Mans earlier in the afternoon, have yet to be revealed, but both Lotus T128s set representative times during the qualifying session.

After languishing near the back of the LMP2 field for most of the free practice session, and for the first hour of qualifying as well, the sudden lunge towards the middle of the P2 times must have come as a relief to Greg Murphy. Chandhok’s 3:44.538 launched the #48 from 26th place overall to 17th, but there it remained, thanks to the first and, as it transpired, only red flag period of the session.

At five-past eleven Pierre Thiriet punched his eponymous #46 Oreca Nissan into the Armco at the second Mulsanne chicane. The Frenchman was reported as being fine, but the car was not.

During the extended stoppage (required for the Armco to be extensively welded) the #8 Toyota was brought back to the pitlane on a flatbed. The rear of the recovery vehicle had been almost down on the ground outside the Toyota garage when, to the evident consternation of the gathered mechanics, the TS030 was swiftly hauled back on board again. The flatbed was then driven off up the pitlane and the Toyota was offloaded directly into Parc Fermé. The Toyota crew remonstrated with officials through the railings, but the car was not returned to them, although one mechanic was admitted to help with the unloading. 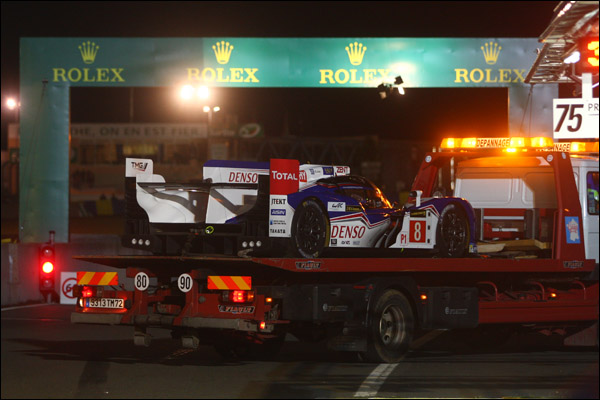 The end, when it came, left the evening feeling rather flat. Fans were denied the anticipated thrill of the final minutes of a qualifying session at Le Mans, and they must look forward instead to something more exciting on Thursday. If, however, the weather predictions prove accurate, then the times set this evening could mean that pole is already settled, and Audi has already secured a front-row lock-out. Watch this space, and watch the skies.