After a day that had already seen the broadest spectrum of weather conditions, it was probably a relief to everyone when the skies started to clear, the rain clouds receded, and the clock ticked nearer to four o’clock. The torrential rain around lunchtime had been enough to have some hardy souls racing Pooh Sticks down the pitlane, and the clap of thunder that preceded that downpour shook the glass in the grandstand windows.

Locals report that the sunshine on Sunday was the brightest anyone in Le Mans had seen since early May – and the Brits thought they were the only ones having a tough spring!

Ahead of the session starting, the only significant news related to the absence of the two Lotus T128 LMP2 entries. Car #31 was reported to be almost complete and lacking little more than a steering wheel, while the #32 was missing a gearbox and a significant number of suspension components. Neither was really expected to take part in Free Practice, but the associated court session began at 3:00 pm, and some degree of resolution must have been reached. This resulted in the release of vital components, including a steering wheel for the #31, which joined the track about two hours into the session. 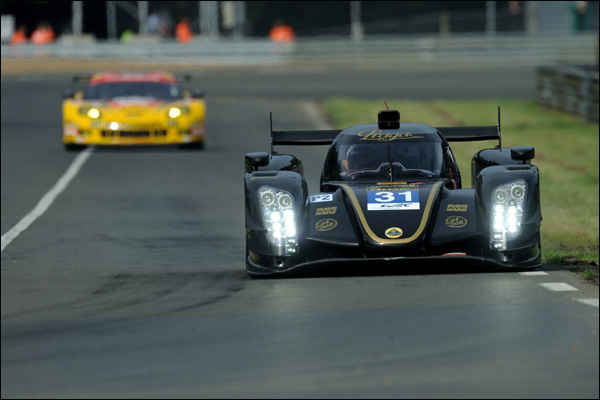 At dot on four the queue at the head of the pitlane was released, and the first dozen or so cars headed out on track – all, with the exception of a couple of P2 cars, to complete a single installation lap and return to the pitlane. Second time around, though, and the session got properly under way, with Oliver Jarvis having the honour of being the first driver to give race control anything to do, spinning the #3 Audi R18 e-tron Quattro through the Esses, just beyond the Dunlop Bridge. 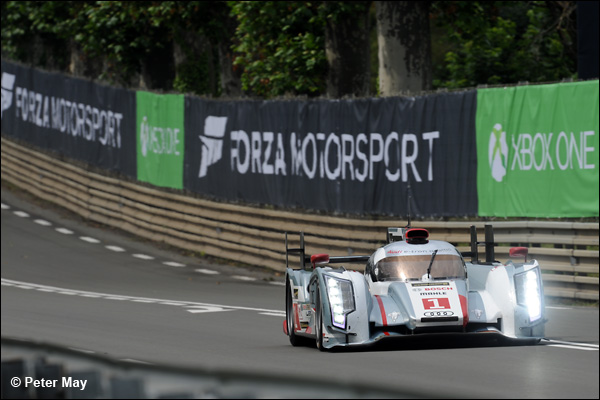 With a dry line officially confirmed, the times were steadily dipping downwards. André Lotterer aboard the #1 Audi R18 was nudging ever closer to the 3:30 marker within 20 minutes, recording a best of 3:31.185. In P2, Marino Franchitti was setting the early pace for Level 5, clocking 3:51.301 at about the same stage in the evening.

The all-new Porsche #91, piloted by Jörg Bergmeister, was the early pace-setter in GT-Pro, moving steadily closer towards the four-minute ‘barrier’ – still five seconds shy but looking especially nimble through the chicanes. 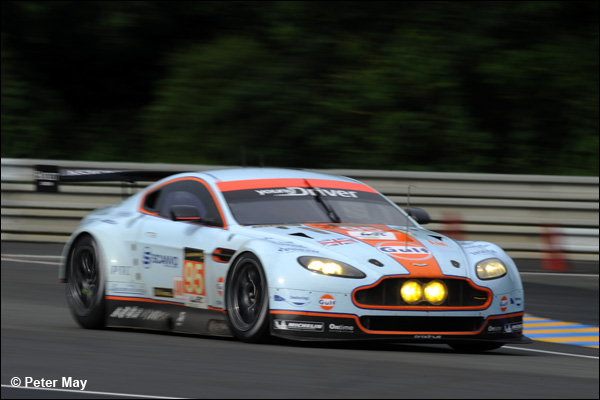 In GT-Am, first blood went to the #95 Aston Martin in the hands of Kristian Poulsen. With half an hour completed, 32 out of the 56 cars had set times – some more meaningful than others.

Dot on the half hour Lotterer responded to a quicker time from Allan McNish to post the first sub-30 time, posting a 3:29.581. The times from Franchitti continued to impress in LMP2, with a 3:46.718 being a good six seconds faster than anyone else in the class at the time, until Mike Conway came through with a 3:47 in G-Drive Racing’s #26. 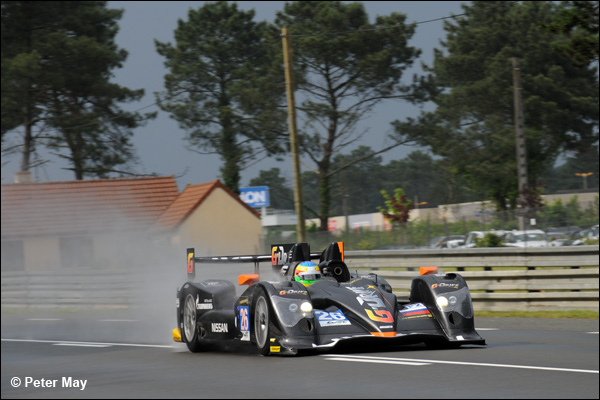 The times continued to tumble steadily, and the number of cars taking to the track increased in equal measure. Allan McNish was the first to duck into the 3:28s, with a .538 seeming impressively quick on a circuit that still included a number of damp patches.

Most teams were keeping things neat and tidy, with few incidents of any note – although Mark Patterson was really exploring the limits of the Murphy Prototype Oreca, spinning on his out-lap, and then going for a slightly more extensive slide into the gravel at Indianapolis a couple of laps later. 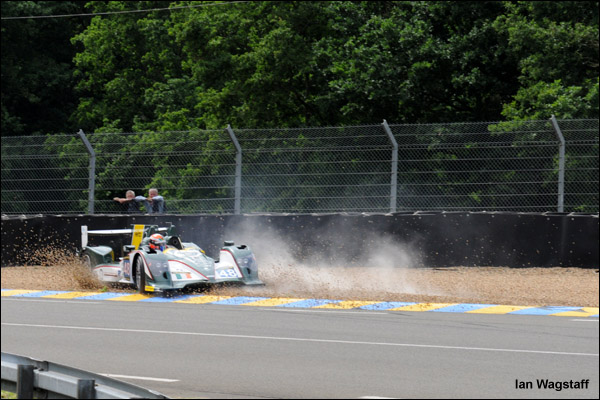 The track was certainly getting quicker almost minute by minute – the pounding tyres clearing away the detritus of a week’s regular road use, since the Test Day, and laying down a thin sheen of rubber to add grip to the surface. With Franchitti handing over to Scott Tucker, it was Alex Brundle who moved into top slot in P2, clocking a 3:45.313 with 40 minutes gone.

It was a similar story in GTE-Pro, where the #71 AF Corse Ferrari of Toni Vilander was the first to oust the Porsches from the top slot, followed shortly afterwards by Darren Turner in the #97 “arty” Aston, posting a 4:00.308 to edge even closer to that psychological four-minute marker. 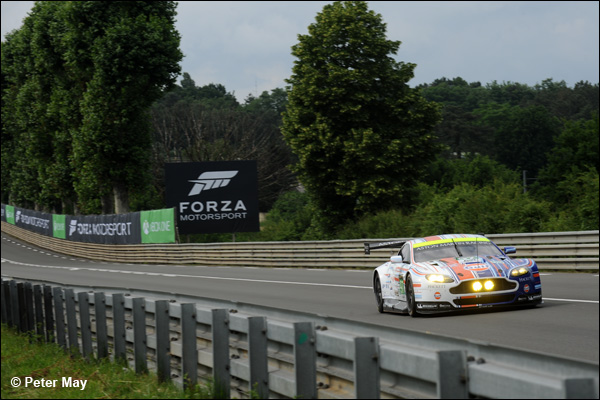 That made it a double for Aston Martin Racing, enjoying the sight of also having the #95 quickest in GTE-Am, but by just two-tenths over Rui Aguas in the bright DSC-orange #81 8Star Motorsports F458. 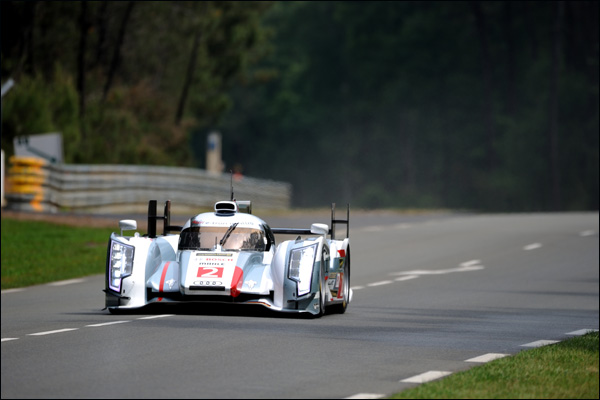 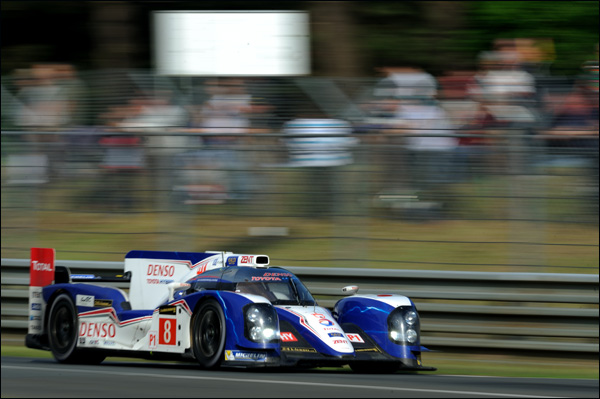 As the session moved towards its second hour, the screens showed Allan McNish still on top with that 3:28.538 for the #1 R18, followed by the #2, and then the #3 third-quickest. The fastest of the Toyotas, the #7, stood fourth, narrowly ahead of its team-mate, and then the first of the Rebellions, the #12, heading the unofficial “privateer” class on a 3:36.015 in the hands of Nick Heidfeld – but not until he’d first spun the car through the Porsche Curves. All eight P1 cars had set times, with Strakka Racing’s #21 HPD keeping the P2 hordes at bay.

It was from within those hordes that the first major ‘off’ of the evening took place, as Eric Lux lost control of the #41 Greaves Motorsport “Caterham” Zytek at the entrance to the second Mulsanne chicane. It was almost exactly five o’clock. The car had hit the Armco just before the corner fairly hard, and with debris strewn across the approach to the complex the session was instantly red flagged.

The interruption gave everyone an opportunity for a breather, and to note that 52 of the 56 had set times, and of the four missing cars, two were the anticipated Lotuses. The other two; the #39DKR Engineering Lola B11/30 Judd and the #88 Proton Competition Porsche, had each completed four installation laps, but had yet to trouble the timing beacon.

The session officially re-started at twenty-past, but in the meantime, the rain had returned to Le Mans. It was only a light drizzle, but more than enough to put paid to any immediate hopes of quicker times. Fewer than half the field elected to resume the session as well, preferring instead to stay in their garages until the situation became clearer – heavy rain was falling across the pitlane, while Arnage was bathed in sunshine. 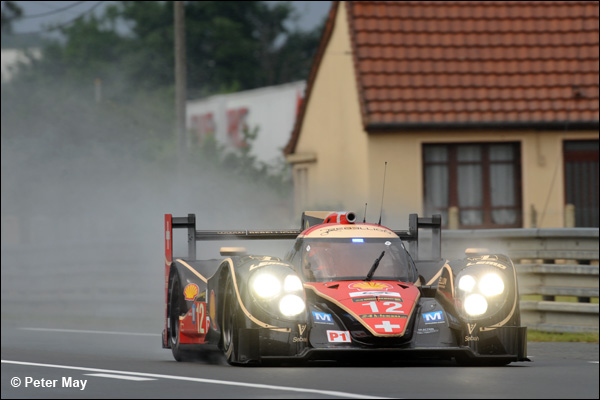 Those who did remain on track faced a challenge to do so, as Neel Jani discovered in the #12 Rebellion Lola. He performed one of the most graceful, and extensive, sideways slides seen in some time. 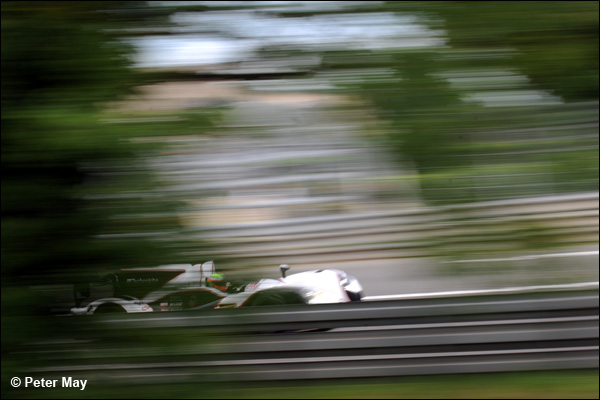 The screen had taken on a nicely structured composition, with the top eight all P1, the next 18 being almost the entire P2 contingent (less Lotuses, of course), and then the bulk of the GTE-Pro cars filling the following six places. The demarcation between Pro and Am became a little blurred at this point, with the #81 8Star Ferrari having moved to the top of the Am pile, ahead of the first of the Astons; Stuart Hall pedalling the #96 to 35th fastest overall. 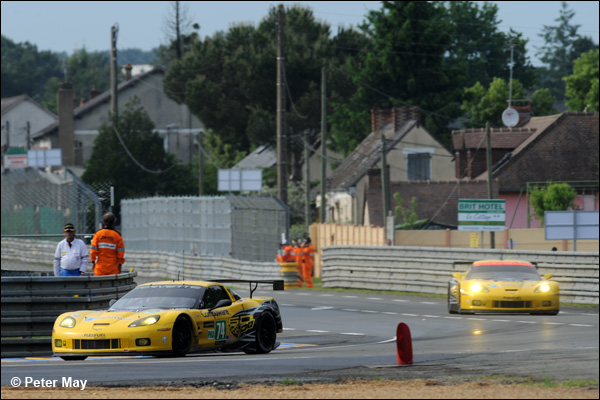 Languishing unrepresentatively at the tail-end of GTE-Pro was the #74 Chevrolet; Ollie Gavin struggling with “upshift” problems, but matters had improved for the venerable DKR Lola #39, having set its first flying lap soon after the restart. Prospects for the Proton Competition were also improving, as the #88 Porsche also posted its first official time.

The second hour had just been completed when the next major incident took place, with Al Faisal at the wheel of the #66 Dunlop-liveried JMW Ferrari F458 thumping the tyres heavily in the first element of the Ford Chicane. The car went backwards with a resounding crump, realigning the right-rear wheel and rendering Al Faisal’s Ferrari incapable of self motivation.

By this time the rain had eased, and been replaced almost universally around the 13.6 kilometres of the Sarthe circuit by bright sunshine. The surface remained slippery however, and times were not improving with the light. The only exception to that rule was Mark Patterson in the #48 Murphy Prototypes Oreca. After a challenging start, the jovial South African (and talented artist) found a fourteen second improvement in a single lap and moved from 49th overall to 33rd in a single bound.

It was at about this time that the #31 Lotus made it’s first and somewhat unexpected appearance. Whether the car’s original steering wheel was returned, or a substitute was found, is not yet clear, but the car appeared in the hands of Christophe Bouchut, and promptly set 27th fastest time overall.

Bouchut’s first flyer of 3:58.194 in the #31 was set just as the track started to come back to prime condition, and was highlighted by a new fastest overall time from Benoit Tréluyer in the #1 Audi R18. His post of 3:26.616 was almost two seconds faster than the second-placed #2. Bouchut continued to improve his times – as did Patterson, each easing their respective cars steadily up through the P2 field. 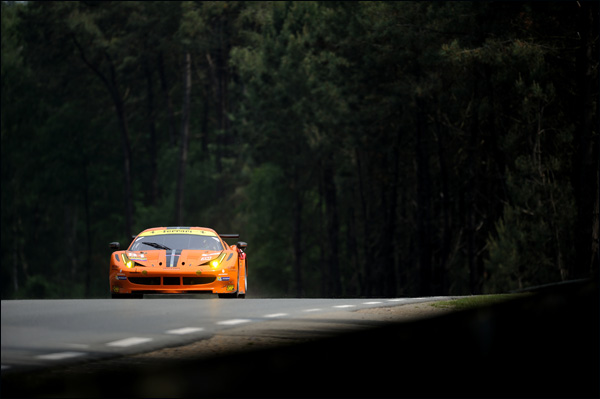 Elsewhere, a few other significant changes. The #81 8Star Ferrari, having headed Am for much of the middle part of the session, was outgunned by Christoffer Nygaard in the #95 Aston Martin to lose top slot in the class, and then finished up in the gravel in the Porsche Curves. Enzo Potolicchio got the car safely back to the garage. In GTE-Pro, Patrick Pilet edged the #91 works Porsche back to the top of the class, and was joined there (some while later) by Matteo Malucelli in the #51 AF Corse F458, easing the #98 Aston into third.

Conditions continued to improve, and with them, individual lap times. They didn’t exactly tumble, but in amongst the classes there were significant improvements. Bertrand Baguette moved fastest in P2 for Oak Racing in the #35 Morgan Nissan with a 3:42.813. Loic Duval clocked an improved 3:25.416 for the #2 Audi R18, to re-establish a full second’s advantage at the head of the overall table. The #45 Art Car Morgan Nissan, meanwhile, was reported for speeding in the pitlane, and Patrick Dempsey dumped his Porsche into the gravel at the Playstation Chicane. The car was extracted relatively unscathed, so it was a simple case of ‘cut’, let’s take that one again. 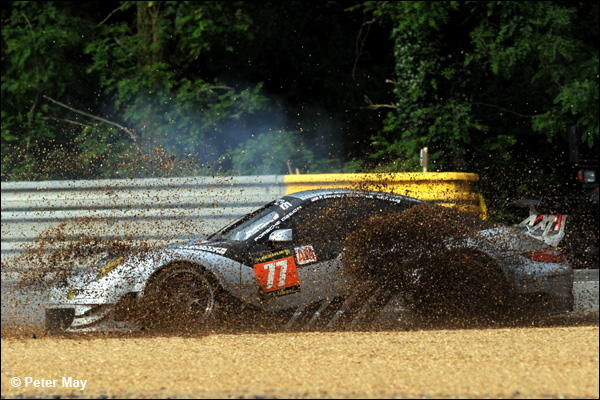 Close to just an hour remaining, and Kamui Kobayashi suddenly snuck through in GTE-Pro to top the class times for the #71 AF Corse F458, just as Marco Cioci mirrored his example in the sister Am car, #61 to leave Ferrari’s heading both GT classes for the first time.

The DKR Engineering Lola continued to struggle for pace, and wasn’t without gravely excursions either. Others not matching expectations included the #36 Alpine A450, never to reappear after the red flag interruption after the team decided to “save” the car’s engine by limiting all running before the race. It will appear in the second session, but with no intended engine swap before the race itself, every hour is precious. The #66 JMW Ferrari was effectively rendered hors de combat after Al Faisal’s ‘off’ at the Ford Chicane, and never had chance to set what might be considered a representative time for the car. The #91 Porsche was reported as having a minor electrical problem and the crew of the #42 Greaves Zytek were addressing gearbox issues.

Forty minutes of the session remained when Tracy Krohn suffered a major accident in the Dunlop Esses. It was good to see the big man emerge unscathed, but very cross, a few seconds after the lime-green Ferrari shuddered to a halt. The #57 appeared to lose grip through the sweeping right-hander and slide, at high speed, across the gravel before striking the tyre wall very heavily indeed. The car was thrown maybe twenty feet up into the air before crashing back down to earth. Judging by the stance of the car as it was towed away, any future action today, at least, seems unlikely.

The session was red flagged to allow time for the crews to repair the barriers, but the task proved sufficiently challenging that the session was eventually abandoned with 23 minutes remaining.