The third hour of the race kicked off with Nicolas Lapierre retaking the lead from André Lotterer just after the Mulsanne Corner, the two cars running side by side from the exit, and the #7 just having enough grunt (and less weight) to pull clear of the recently refuelled R18. Lapierre then pitted at the end of what was his 27th lap, but technically, having not crossed the line, wouldn’t officially be recorded as the race leader.

Having had an hour or more of relatively dry running, the third hour brought with it a resumption in the intermittent showers that had been such a feature of the opening minutes. Caught out by the changing conditions was Kevin Weeda in the #31 Lotus, spinning across the entrance to the second chicane and beaching the car across the kerbs.

The major change in LMP2 was the elevation of the Jota Zytek into second place, Oliver Turvey finding a combination of pace and slick pitwork to get ahead of Pierre Kaffer (Pecom), and bringing Maxime Martin with him, running third in P2 aboard the #46 Thiriet by TDS Oreca.

One of the more thrilling deciders came at quarter past the hour, when Bruni (#51 AF Corse F458) moved ahead of Toni Vilander (#71 AF Corse F458) for fourth in GTE-Pro after a lengthy tussle. Ahead of them, Darren Turner (#97 AMR Vantage V8) had extended his lead over Marc Lieb (Porsche #92) to ten seconds, with Rob Bell maintaining his tenacious grip on the German’s tail, just a few tenths adrift in the second Aston.

There was a moment of consternation roughly half-way through the hour when the #7 Toyota pulled off onto the side of the Mulsanne, easing to a halt with what appeared to be an electrical problem, but was subsequently revealed to have been fuel-pressure related. The car stood there for several lengthy seconds before Lapierre got the hybrid TS030 moving again, and headed back into the race as if nothing had been amiss, even passing the pitlane entrance to press on with the race. The car was holding 5th at the time. Almost simultaneously, Alan McNish pitted the #2 for a scheduled refuel, allowing Davidson through to third. On the next lap, Lotterer brought the leading #1 through the pitlane for the same treatment.

The battle for seventh in GT showed the SRT Viper (#53), with Marc Goosens at the wheel, finding the conditions ideally suited to the V10 powered musclecar, and passing the #73 Corvette (Garcia) and Bill Auberlen in the #98 AMR Vantage V8.

Meanwhile, with the rain increasing, the longer-running Toyotas were making their next series of regular pitstops. Davidson was first to take on fuel, and slotted back into the order as 5th overall, just behind the yet-to-stop Lapierre. 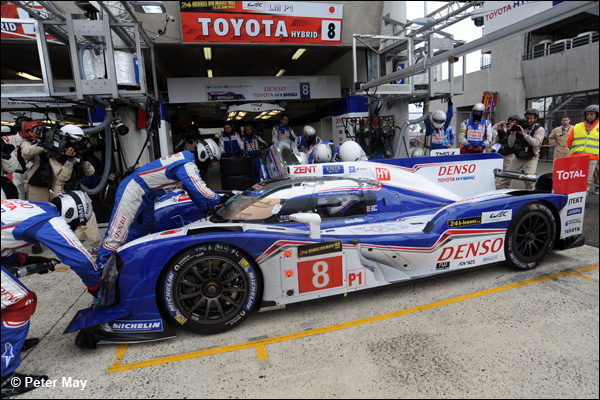 Having been leading GTE-Am for much of the hour, Pascal Gabon sustained a critical left-rear puncture in the #67 IMSA Porsche as the race moved to within ten minutes of the end of the hour. As he completed the best part of half a lap the rubber disintegrating enough to leave him running on the rims as he sidled down the pitlane where, bizarrely, one of the TV cameramen moved close enough actually to touch the car – no doubt to convey the extent of the damage, but simultaneously risking a penalty for the team. 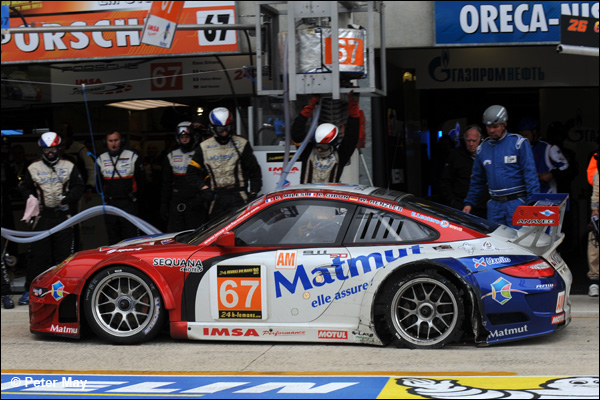 The weather continued to play its part, offering the awkward challenge of heavy rain along some sectors – notably the Mulsanne – while leaving other lengths dry.

A driver change for the Oak Morgan #24 had given Alex Brundle a turn at the wheel, but such had been the emphatic dominance of Oliver Pla – sometimes ten seconds a lap quicker than anyone else in the class – that the car maintained its P2 lead. 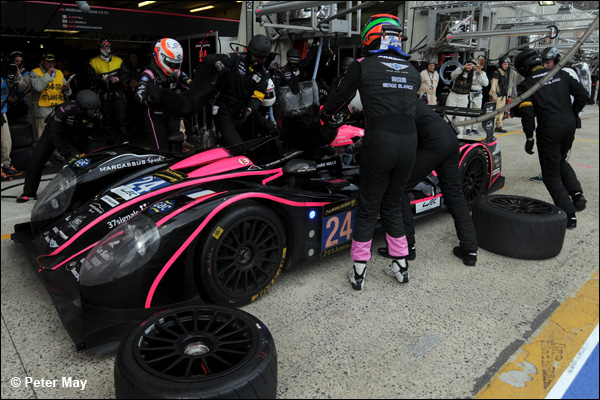 Nearing the end of the third hour, the #35 Oak Morgan was maintaining a finger-tip hold on second, also with a driver change to Ricardo Gonzalez after an impressive run from Baguette. Third was being held by Ryan Briscoe in the #33 Level 5 HPD.

We apologise for the late posting of these hourly updates, but the Internet connection in the Media Centre at Le Mans was “intermittent” to say the least.  This text was prepared before any official announcement was published concerning Allan Simonsen’s accident. Also, as a result of connectivity issues at Le Mans, it proved impossible to post this for almost three hours.