The fourth hour of the 2013 24 Hours of Le Mans began in the worst possible way. Official confirmation came from the ACO’s press office that Allan Simonsen had not survived his accident in the #95 Aston Martin Racing Vantage V8.

Allan had been a close and personal friend of everyone here at Dailysportscar for many years, and we have followed his remarkable career with an interest reinforced by the pride we have felt in counting him a friend and colleague. His loss has left all of us reeling, and our considerable sympathies are extended to his wife Corina and daughter Mie-Mai, and to the rest of his family and the many others here at Le Mans, and in pitlanes, paddocks and race tracks across the world, in Europe, America, and especially in Australia, who have been privileged to know and admire him.

A statement from Aston Martin Racing followed some fifteen minutes later, confirming the tragic news and expressing the team’s regret. We understand that David Richards broke the news personally to his family, and that they have expressed their desire that the team does not withdraw from the race. It would seem appropriate, in Aston Martin’s centenary year, that they persevere here at Le Mans, and do their utmost to honour Allan’s memory with a podium tomorrow afternoon.

The news left it very difficult for us to focus on what was still happening out on track, so our apologies if the following report is a little disjointed and less thorough than we might hope.

In LMP1, the rain eased, the track dried, and Audi re-established the R18’s dominant position at the front of the race, establishing a one-two-three that placed the #1 leading (Tréluyer taking over from Lotterer), #2 second (Duval from McNish) and #3 third (Jarvis from di Grassi). Simultaneously, the silver cars established an advantage over the leading #8 Toyota of around a minute, Buemi taking over from Davidson. That left Alex Wurz fourth and, briefly (yet to pit) Danny Watts fifth and the leading privateer, although that changed to a Rebellion six-seven when the Strakka Racing HPD made its fourth scheduled pitstop.

The Rebellion situation wasn’t helped by a spin for the #12 Lola at Tertre Rouge following what appeared to be a puncture for Nick Heidfeld, the rear trailing smoke as he made his slow way back to the pits. 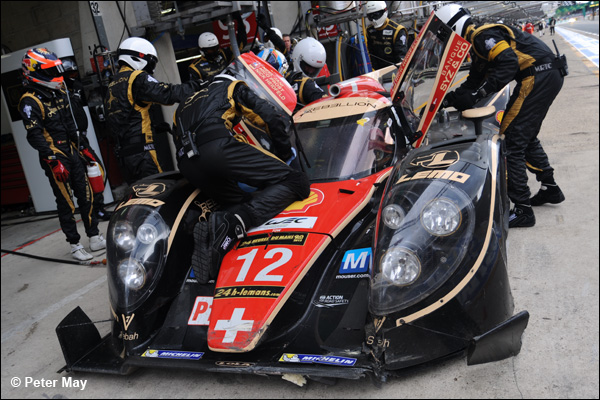 Further back in LMP2, Mark Patterson had swapped seats with Brendon Hartley in the recovering Murphy Prototypes Oreca, and found himself coming back out on track just ahead of eighth-placed Marino Franchitti in the #33 Level 5, and the South African-born gentleman driver kept the Scott at bay from Arnage all the way through to the run down the Mulsanne, and appeared to have good pace against the HPD. The #48 moved onto the first timing screen, 24th overall, just before the end of the hour. 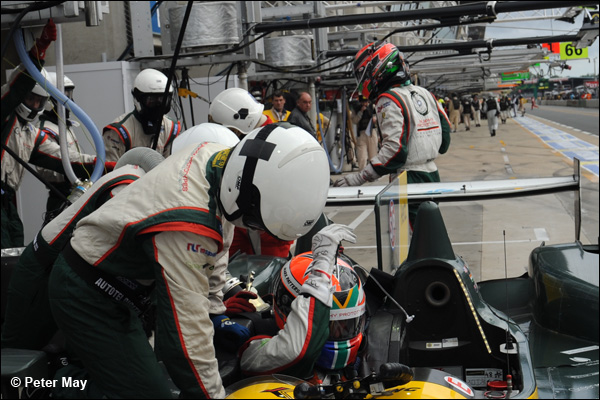 Lucas Luhr was lucky to get away with a lurid slide through the Porsche Curves, after challenging Nick Minassian (#49) for 13th overall. The car ran wide onto the grass, caught the concrete a glancing blow down the left hand side, and then slewed sideways right across the track, swiping out a few flexi-cones, and coming to a halt. Lucas returned carefully to the pits for a check up, but resumed fairly swiftly in 17th.

And so the race moved into its fifth hour . . .

We apologise for the late posting of this hourly update, but the Internet connection in the Media Centre at Le Mans was “intermittent” to say the least. Five hours in, we finally secured a connection.