As the sixth hour began, Benoit Tréluyer led the race in the #1 Audi at the head of an Audi 1, 2, 3. The #24 Oak Racing Morgan of David Heinemeier Hansson headed P2, from the #26 Oreca of Roman Rusinov and the #35 Morgan of Martin Plowman. 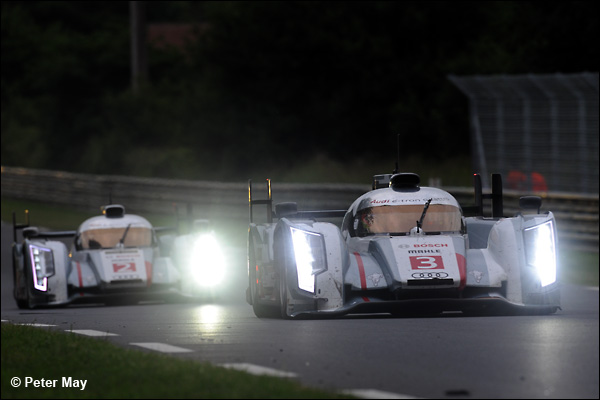 Fred Makowiecki was heading LMGTE-Pro in the #99 Aston by 14 seconds from the #97 Vantage of Darren Turner and by a full 31 seconds from Romain Dumas in the #92 Porsche.

Jack Gerber led LMGTE-Am in the #61 AF Corse Ferrari and hung on to his lead despite a spin in the Ford Chicane. 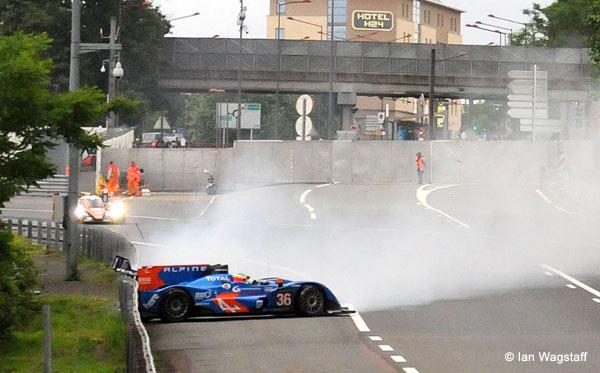 Seven minutes into the hour, however, the #36 Signatech Alpine of Tristan Gommendy hit the barrier at Tertre Rouge which left a trail of debris along the start of the Mulsanne Straight and necessitated the recall of the Safety Car while it was cleared up. The #2 Audi had just pitted, but was held at pit exit until the Safety Car train came by.

With no barrier repairs required on this occasion, the caution was only a short one and the Safety Cars were in after just 15 minutes at the end of Lap 77.

The P2 leader had a spin in the Porsche Curves right in front of the Audi after suddenly losing control – had something broken? The car hit the tyre wall head on but was able to carry on and get to the pits; Joe Bradley of Radio Le Mans reporting that the team was replacing the nose but that “There isn’t a scratch on it!” The class lead was now held by Rusinov (#26 G-Drive Racing Oreca).

Further back, the #32 Lotus had shed its rear bodywork along the Mulsanne and the Safety Car was out once more. Jack Gerber pitted from the GTE-Am lead, enabling Piergiuseppe Perazzini to assume P1 in the #55 sister car.

Again, the caution was only a short one, but we didn’t have to wait long for the next incidents – the #81 8Star Ferrari of Jason Bright suffering a rear-left puncture a long way from home and the #49 Pecom Oreca of Luis Perez-Companc having a quick spin at Mulsanne Corner, possibly aided. The Australian in the orange Ferrari gingerly nursed the car home, but the rear end and left flank was unavoidably damaged as the tyre disintegrated. 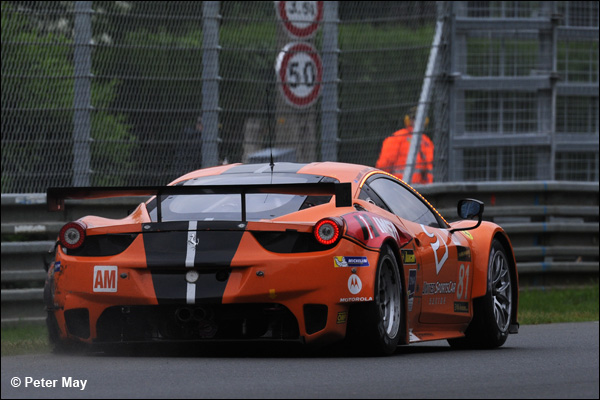 As an aside, Nicholas Lapierre told Marc Laffeas that the reason for the #7 Toyota stopping on track earlier was result of the failure of one of the car’s two fuel pumps. It took him a while to work out what had happened, but he was able to continue; but with only one pump.

Gerber suffered another spin in the #61 – this time a few hundred metres forward of his previous one – but this time after being forced wide by a Toyota. Again, the South African was able to continue without damage.

Suddenly, the Audis were setting purple sector times as the pace of the first three cars dropped into the 3:24s – below Toyota qualifying pace. And with six minutes of the sixth hour remaining, Loïc Duval set a new fastest-overall lap time – 3:23.269 – in the #2 R18. 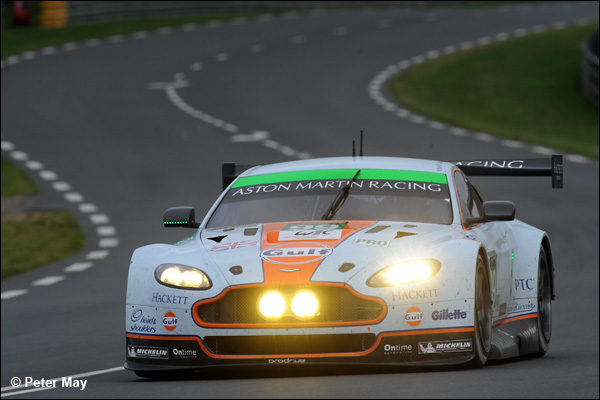 In P2, the lead changed from John Martin to Martin Plowman once more as the #26 pitted, while Bruno Senna took the Pro lead on track in the #99 AMR Vantage from the #97 sister car of Peter Dumbreck. A lap later, the Scot reclaimed the spot from the Brazilian – but not for long; the places switching back further round the same lap. All the while, Richard Lietz was poised to pounce in the #92 Porsche, just over a second behind.