The start of the eighth hour brought with it a message to the fans from David Richards, who on behalf of Aston Martin Racing thanked everyone for their support and explained that Allan Simonsen’s parents urged the team to keep racing in his honour. This year’s race is very much going to be run in memory of Simonsen by the teams, organisers and fans.

The lengthy repairs in the Audi garage continued deep into the eighth hour, as the chances of the #1 car winning slowly faded away.

ADR-Delta’s woes also continued, but this time for the #26 car which had been leading the LMP2 class. It came in for a regular stop but would have its front cover taken off in the pit box. The mechanics then began to work on fixing an issue with the illuminated door number. This hiccup would promote the #35 Oak Morgan of Bertrand Baguette into the lead of P2 and elevate the #38 Jota Zytek of Simon Dolan into second place. 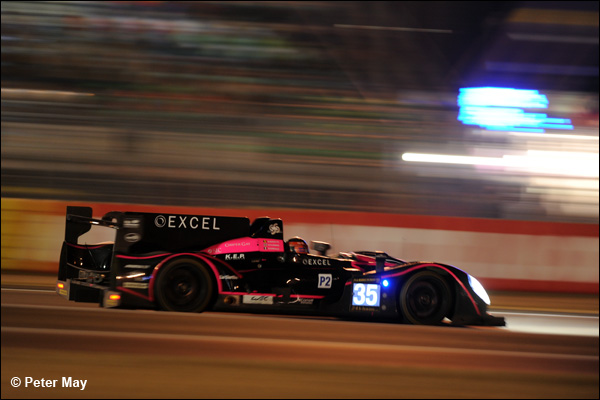 The rain then started again, adding to the drama up and down the field. Initially it was reported as heaviest at the Dunlop bridge.

GTE Pro’s battle was also becoming closer during the first half of the hour, with the two AF Corse Ferraris running just one second apart again – Fisichella in the #51 holding his spot against Vilander in the #71.

There was also a scrap in GTE Am, for second place in class, with Ruberti in the #88 Proton Porsche leading Patrick Long in the sister car (Dempsey Del Piero Racing #77) by just a couple of seconds, before Long was forced to pit. Certainly a battle worth watching for so long as the Platinum driver remains in the car.

Audi’s #1 car was finally wheeled out of the garage with 33 minutes to go in the hour, with Tréluyer at the wheel. The in-garage work cost a total of 43 minutes, or 12 laps and the R18 rejoined the race in 24th position, last in LMP1. 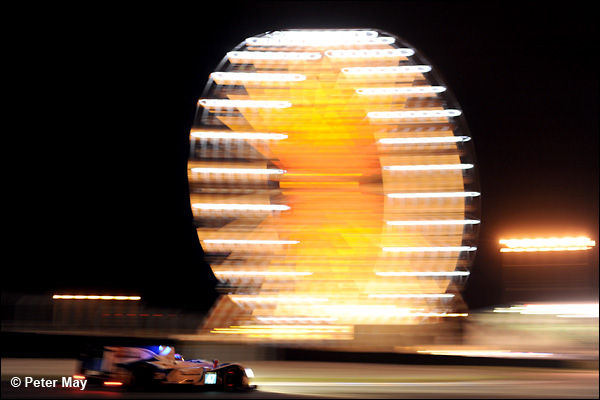 Alexandre Imperatori’s debut at Le Mans in the #47 KCMG car continued to impress. During the hour he was frequently lapping quicker than Bertrand Baguette in the lead Oak, and definitely on a mission to make up ground and get back into contention for a top-ten spot in the ultra-competitive class.

Jann Mardenborough was also lapping very rapidly during his first appearance at Le Mans and ended the hour in fourth place in LMP2.

With ten minutes left in the hour the safety car was deployed once again, this time in response to an incident at the Porsche Curves involving the #25 ADR-Delta Oreca, while the #33 Level 5 HPD was wheeled into the garage with steam billowing out of the rear.

The #3 Audi with Lucas di-Grassi was also pushed into the garage, with the engine cover and the front section being removed as the eighth hour finished.