The 12th hour started with the Lieb/Turner battle as close as ever – half a second continuing to be the gap – but the dogged German would not give his opponent the opportunity he needed.

In LMP2 Ricardo Gonzalez pitted the #35 Oak Morgan Nissan and Alex Brundle took over the lead in the #24. Fastest man on the track in the class was Alexander Rossi in the #41 Greaves Zytek – 3:40.5 – but the car was down in 32nd overall and 15th in P2. 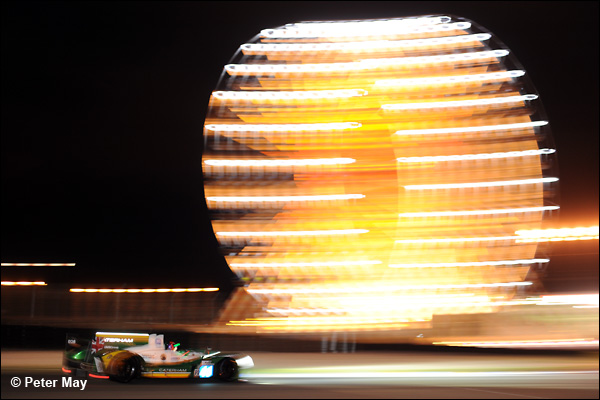 SAFETY CAR with 19 minutes of the hour gone. Tony Burgess had a huge off in the Porsche Curves in the #30 HVM Status Lola with the car suffering extensive damage and a flash fire. The coupé was clearly out of the race – the rear axle, gearbox and wheels having been torn off – but the driver was able to climb out and walk unaided, if a little shocked.

The Lola became the sixth official retirement alongside 57, 25, 28, 31 and 95. This was also the sixth caution period.

The caution ended at 02:40. Just before the restart, the #33 Level 5 HPD of Marino Franchitti was struggling to get away with huge plumes of white smoke emanating from the black car. Whatever the issue was looked to be resolved, with the Scot resuming soon after.

McNish had a hairy moment on the restart when he ran across the Mulsanne gravel in the #2 Audi, but true to form he barely missed a beat and carried on at the head of the field at top speed. 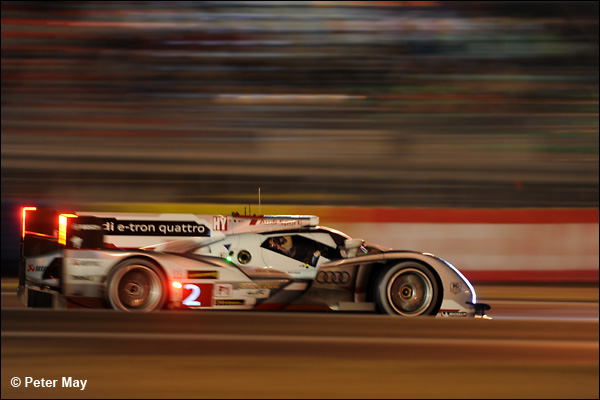 The top places in the other three classes continued to change regularly as the pitstops churned, but it was difficult to see who – if anybody – was making significant progress. But small things could still make a difference, and a message on the timing screens saying that the #97 Aston needed attention to a door indicated that an unscheduled stop would be required. Darren Turner had just handed the Vantage over to Stefan Mücke.