Jann Mardenborough is definitely one of the big stories of the race, he continues to impress in composure and pace. He has been getting faster and faster during each stint, and set a 3:41.630 fifteen minutes into the hour which is his personal best time of the circuit 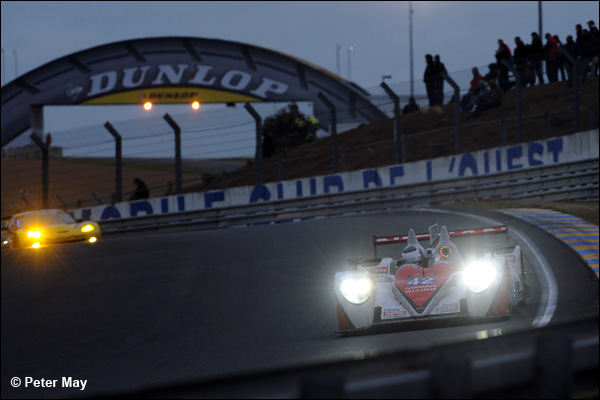 His team mates however, were not so lucky. Tom Kimber-Smith in the #41 Caterham liveried Zytek crawled round the circuit with what was speculated as further issues with the suspension, adding to the list of issues the car has faced during the weekend.

Richard Lietz and Peter Dumbreck Pitted from first and second in Pro after ten minutes, rotating Bruno Senna back to the top of the GTE class for the time being.

There was a heart-in-mouth moment at 07:30 when Benoit Treluyer threaded the needle between the #8 Toyota of Stephane Sarrazin and the #48 Murphy Oreca of Mark Patterson at the start of the Mulsanne; the #1 Audi clipping the P2 as it went through, but with fortunately no more consequences than a small wobble.

Mardenborough continued to gain pace, lowering his best time to 3:40.787 after his latest stop – more than holding his own in the company of the likes of Pla, Baguette, Conway, Martin and Minassian. We’ve said it before many times and we’ll say it again – the GT Academy graduate is unquestionably the real deal.

Jacques Nicolet was going rather slower in the early morning gloom, following a wheel-issue on the front left of the #45 ‘Art Car’. The Morgan Nissan went straight across the second chicane and the Oak owner had to carefully nurse the car back the final four miles. Scott Tucker, meanwhile, was brightening the pitlane with another demonstration of the #33 HPD’s flame-throwing facility, and the now-repaired Greaves Zytek was taken back out by TKS, but with a light not working.

The other TK made his latest scheduled stop in the #2 Audi at 07:45 for what looked like fuel only. As he returned to the race, spots of rain were being reported in the pitlane. The #46 Thiriet by TDS Oreca had also pitted, but went into the garage for attention before Maxime Martin could continue; the stop costing it around nine minutes and fifth place in class. Natacha Gachnang now held that slot in the #43 Morand Racing Morgan. 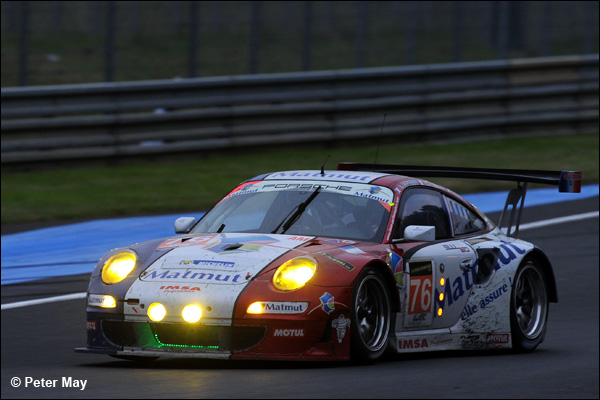 The #76 IMSA Performance Porsche continued to lead LMGTE-Am, Christophe Bourret at the wheel, while Lorenzo Case was lapping a dozen seconds quicker in the #55 AF Corse Ferrari but a lap adrift in second. Patrick Dempsey held third in the #77 Del Piero Porsche, and again faced the prospect of being hunted down by Marco Cioci in the #61 AF 458; the Italian needing to find just over a minute on the American.