The sight of a very slow #98 Pro Aston Martin opened Hour 18. The timing screens suggested a puncture, but it wasn’t hard to note the lack of flailing or deflated rubber as the TV cameras followed it down the Mulsanne and easy to notice blue-tinged smoke emanating from both sides of the car.

The Vantage eventually came to a halt at Mulsanne Corner, and the scrambling of the Safety Car to allow dropped oil to be cleaned from the second chicane confirmed that this was engine-related.

At the same time, Lotus tweeted that the #32 had also been retired – the reason being clutch issues.

The #8 Toyota of Sarrazin looked likely to benefit from the SC, and dived into the pits for a splash of fuel. However, as it headed back out, it was held at the end of pitlane having missed the green light by five seconds. The delay cost it a minute and left it behind a different Safety Car from the leader. 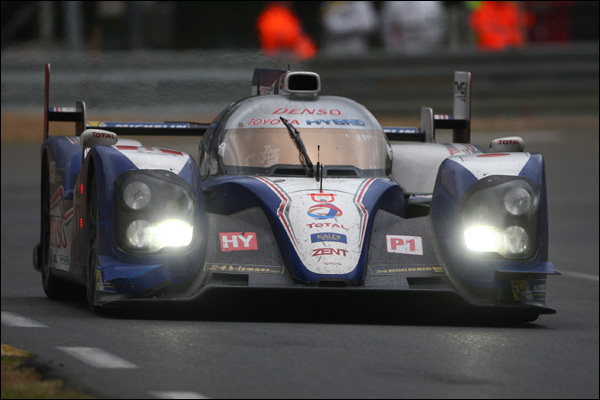 Even though the #98 was the cause of the caution, the surviving two Pro cars benefited significantly from the closing up of the field, as both had pitted just before it began – giving them a stop in hand over the leading #92 Porsche, with all three cars now nose-to-tail behind the same Safety Car. Both Pro Corvettes took the opportunity to change brake pads. 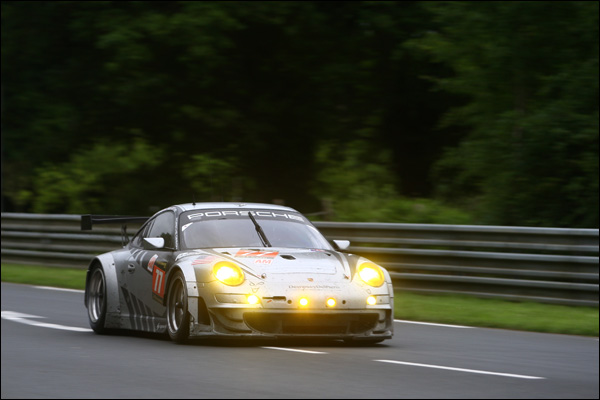 The GTE-Am class looked likely to be significantly affected, as Patrick Dempsey’s cushion in third place over Marco Cioci (#61 AF Corse) had virtually disappeared. Jean-Karl Vernay (#76 IMSA Porsche) maintained his lead in the class over Piergiuseppe Perazzini, second in the #55 AF Corse F458.

The race went green again at 08:30 after a full 20 minutes under the Safety Car. Tom Kristensen’s first goal on the restart was to catch and put another lap on the #7 Toyota ahead. However, less than 30 seconds after the track went ‘green’, the Safety Cars were being readied to go out again following an unforced spin at the exit of the second chicane by Andrea Belicchi.

Belicchi had moved the #13 Rebellion Lola wide to pass one of the GT Porsches, but in doing so, straddled one of the painted lines on the road. The rear twitched, he corrected, the other tyres gripped, and the car veered sharply to the right and speared into the Armco, head-on. Debris and bodywork was scattered across the track.

The Italian ended up facing the right way, and began the long trek back to the pits under his own steam. The crash box looked to be extensively damaged and a repair – if possible at all – would be long and difficult.

Belicchi himself was helped out of the car and attended to by the doctor, with Bruce Jones of Radio Le Mans suggesting that he looked to be indicating pain in his ribs.

The accident caused significant damage to the Armco barrier, which required another lengthy repair, leading to a ninth safety car period.

It is also worth noting that there were a couple of other spinners before the Safety Cars were re-deployed: the Jota Sport Zytek with Simon Dolan at the wheel and the #91 Porsche, both going round at the Dunlop Chicane. The DKR Lola had yet another spin – this time at the second Mulsanne Chicane.

Rebellion’s race had been running almost perfectly, yet their chances of dominating the ‘privateer class’ and beating Strakka were slipping away remarkable quickly. With both Lola Toyotas, the #12 and the #12, being repaired in their garages, Rebellion was the centre of attention in pitlane as the race moved through, under the Safety Car once again, towards the start of its nineteenth hour. 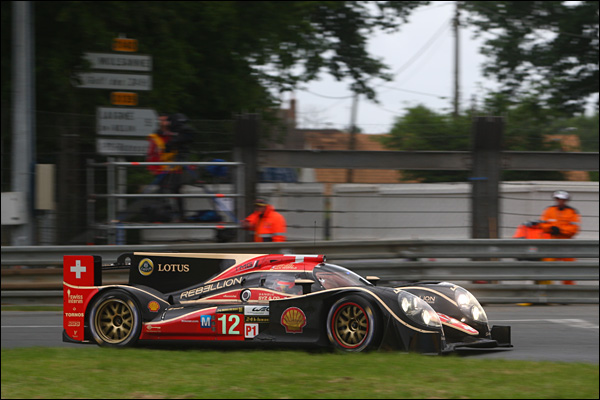