Just before the next of what would be the tenth caution period began – again estimated to last 30-40 minutes – the #47 KCMG Morgan was officially retired with a ruptured fuel cell.

We received a Dunlop update from Pippa Nielsen: The #35 Morgan double-stinted the intermediates with Martin Plowman at the wheel during the damp period around dawn. The Dunlop engineers had a look during the stop and the driver said he was happy with the tyres so they sent him back out.

The majority of cars used the intermediates for the wet conditions. A few cars tried the full wets at times, but John Martin drove 33 laps in the wet on slicks. After a cautious start, he reported that he was happy and that it had been the right decision.

Allan McNish pitted the leading Audi just before the end of the Safety Car period, which left Loïc Duval in the lead with new boots, a full tank, and a lap advantage over the #8 Toyota.

Kazuki Nakajima had a close shave at the Dunlop chicane;  the #7 Toyota cutting the corner and finding air after vaulting the kerb – just missing a Porsche in the process – before coming to a rest under the bridge and facing the wrong way. He was able to get going again after a couple of seconds. 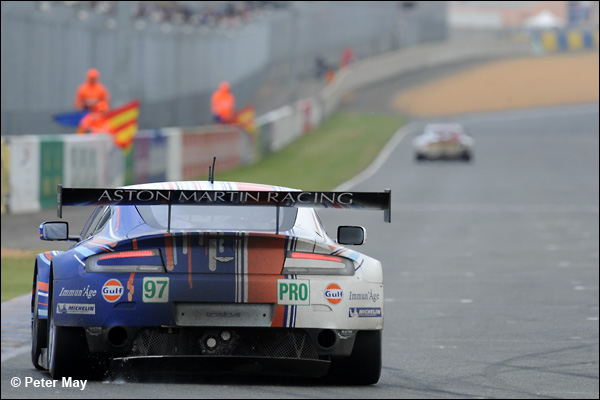 Darren Turner took over control of the surviving Pro AMR Vantage, also at the end of the caution, and just 11 seconds separated #97 from the #92 Porsche in the lead. Further back in the class, Matteo Malucelli took fifth in the #51 AF Ferrari from Tommy Milner in the #74 Corvette.

Andrea Belicchi update: as suspected, Rebellion confirmed via twitter that he had suffered broken ribs.

Marcel Fässler pitted the #1 Audi after a three hour 12 minute stint, as the sun came out for the first time this weekend – and by God did we need something to lift the gloom, in more ways than one!

As the hour came to a close, the fight for the Pro lead had shrunk to 8.8s, while in GTE-Am Matt Griffin in the #61 AF Corse Ferrari was hauling in Joe Foster’s #77 Porsche at the rate of five seconds per lap in the hunt for third. 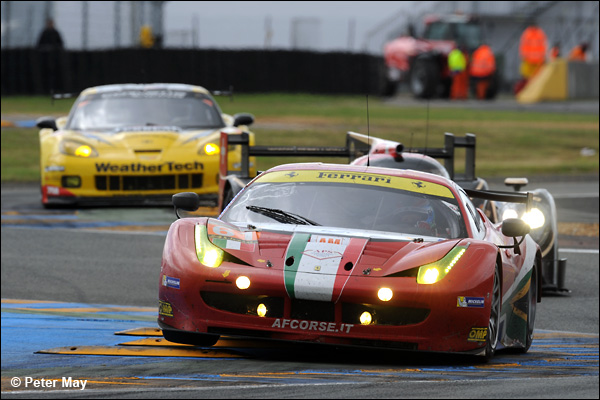