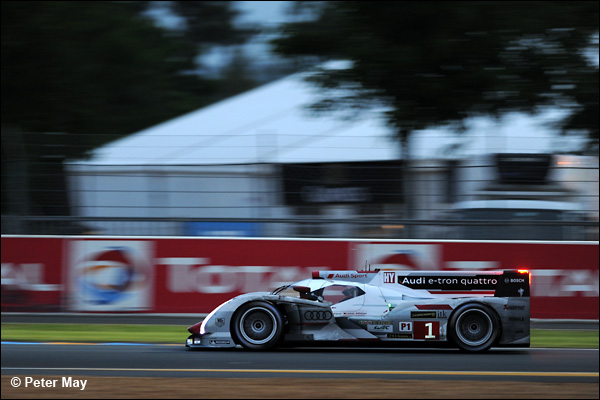 As the race passed the halfway point, we had a new fastest lap – 3:22.746 from André Lotterer in the #1 Audi – and a seventh Safety Car period (a Le Mans record, we believe); Howard Blank hitting the barriers at Dunlop in the #54 AF Corse Ferrari 458.

The American initially climbed out of the car and over the barriers, but didn’t move too far away from the car, and was encouraged to get back in and try to coax the Ferrari back to the pits. Remarkably, he was able to drive it away from the point of impact, although the extent of damage suggested that the Ferrari was clearly a retirement. The sight of the dreaded Armco truck, however, indicated that this was likely to be another lengthy caution.

The AMR team took advantage of the slower pace to bring in Stefan Mücke to carry out the required repairs to the door of the #97 Vantage. The car dropped to fourth in class, a lap down on the class leader, but it could have been a lot worse.

Under the safety car conditions, somehow, there were further incidents, as the #70 Larbre Corvette got beached in the gravel at the first Mulsanne chicane before being wheeled back into the garage.

The leader in GTE Pro, the #99 Aston Martin would come in and have some brief work done to the brake discs, and then return to the race sitting second In class behind the #92 Porsche.

The Am class was also victim of some further Safety Car drama, as Piergiuseppe Perazzini in the #55 AF Corse 458 stopped out on circuit along the Mulsanne straight.

A minor issue occurred for the second-placed Toyota, Sébastien Buemi bringing the #8 car in with a damaged dive plane, which was swiftly replaced by a willing mechanic. As this happened the stewards decided to extend the safety car period due to rain.
The race would restart nine minutes into hour 14, with the rain coming down heavily around most of the circuit.

The two Toyotas swapped positions just two laps after the green flag waved, with Lapierre getting past Buemi and taking the #7 up to second overall.

Meanwhile the KCMG squad were forced to wheel the #47 Chinese entered Morgan Nissan back into the garage. The engine cover came off and the mechanics started furiously working on the rear, attending to an oil pressure issue. It would lose ten minutes before going back out.

The LMP2 lead battle was once again providing some great action, as the two Oak Morgans (#35 and #24 respectively) met on track.

The two Toyota’s were back at it again at this point as well, with Buemi skipping the Ford Chicane and then the Dunlop chicane while getting second place back off the #7 in the process.

While many teams opted for full wet tyres during the Safety Car period, with half an hour left in Hour 14, the #97 Art Aston came in for a stop and changed back to slick tyres. The track however didn’t agree with the team’s strategy, as Stéphane Mücke would struggle to keep on pace with the other leading GTE Pro cars. Despite this, the #98 would also come in for slicks shortly afterwards as the pace picked up in the second and third sectors. Maybe the race would come back to the Gulf liveried V8s?

André Lotterer clearly wasn’t giving up on the race, even though he was 21 laps off the lead. He was lapping as much as six seconds a lap quicker than the lead #2 Audi. When the #2 came into the pits with ten minutes to go in the hour, they too would opt for slick tyres.

Just before the hour’s end, Strakka’s HPD would get beached at the Ford Chicane facing the wrong way with Johnny Kane at the wheel – not his first error of the weekend and very uncharacteristic. As this happened Strakka’s main rival, the #12 Rebellion Lola, was spotted in the back of the garage with the front end dismantled. The issue was fixed quickly, but Kane’s mistake appeared to be very conveniently timed.