After such a tough morning, the Jota team finally came back to life. Oliver Turvey found a sweetspot in the car and was lapping extremely quickly in his quest to catch Olivier Lombard in the #43 Morand Oak for seventh place. Oliver set the car’s personal best time of 3:40.176, ten seconds quicker than the Morgan two and a half minutes ahead.

The Rebellion Racing team also had a promising start to the hour, when the #12 car was sent out on the track again after two hours and twenty minutes in the garage. 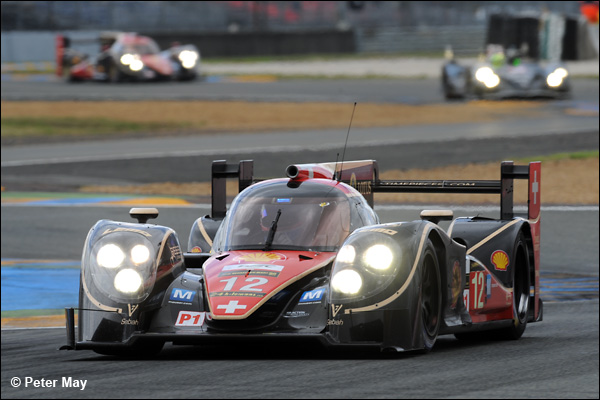 Darren Turner’s spirited and emotional drive continued, slowly chipping away at the #92 Porsche’s lead – a handful of tenths each lap –  in an attempt to bring the “art car” home victorious on this trying weekend for the whole Aston Martin Racing organisation.

All wasn’t well up and down the pit lane though, as the ProSpeed Porsche would stop at the escape road at Indianapolis before slowly making its way back to the pits. The Level 5 HPD was also in the garage during this hour with major engine issues, not linked apparently with the excessive flames leaving the rear when pitting. The biggest drama though, would occur on the pit lane.

The two AF Corse 458s (#51) and (#61) were in for a stop, the #61 being released in the line of sight for the #51. There was then confusion between the mechanics as the #51 was released with the fuel rig attached. Malucelli was held briefly, then told to go by a mechanic at which point the #45 Oak was coming down the fast lane. The #51 t-boned the Morgan as it came in and sent it sliding into its pit box. The #45 would then have it’s engine cover taken off for further repairs in it’s pit box, much to the frustration of Philippe Mondolot in the car.

The sun may have come out briefly during the first half of the hour, but the rain came again. The #7 Toyota seemed to suffer first, and was significantly cautious passing through the Porsche Curves. The whole of sector three would be affected shortly after with driving rain. This caused the #1 to have an off into a gravel trap before having a close moment with the #8 Toyota entering the Mulsanne Straight.

After the cycle of pit stops for the contenders in GTE Pro, it was still extremely close for the lead. Turner’s stop was slightly quicker than Lieb’s, but the #97 would still trail by around eight seconds.

The #45 Oak “art car” would hit trouble with three and a quarter hours to go when Mondolot hit the gravel at the second Mulsanne Chicane and parked the car in the marshal alcove. It looked like a retirement, as it showed no signs of moving.

Rebellion’s #12 entry would once again suffer continued woes, as it went back into the garage once again with issues at the rear. 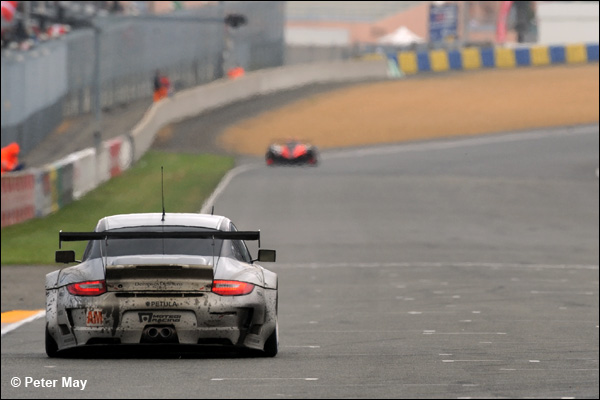 In Am there was a battle brewing between former single-seater sparring partners – Patrick Long and Matt Griffin – the #77 Porsche of Long had been gradually fighting back to try and nab a podium, and by the end of the hour the gap was under a minute.

The start of the hour brought some potentially worrying news from the Toyota camp; the team expressing worry about the rear brake temperatures on both cars. However, down the other end of the pit lane Loic Duval was complaining about pickup and vibrations in the #2 lead car. 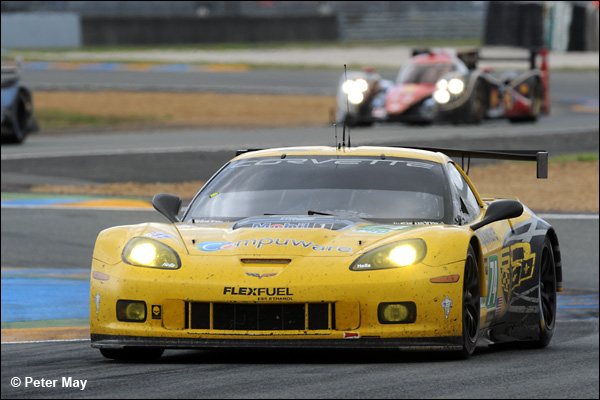 Almost unnoticed during this race have been the works Pratt and Miller Corvettes. Richard Westbrook and the #74 crew have managed to make their way up to fifth place in GTE Pro, despite having such poor pace all weekend. Although unlikely, Westbrook has a chance to get past Kobayashi since he is lapping significantly faster than the #71 ahead – Kamui has a lap on the yellow machine though.

Just as we thought the rain was finished, and the track had cleared up – it showed its ugly face yet again in the form of further short bursts. As that happened, Pecom Racing – who had been having a quiet and steady race – were handed a 30 second stop and go penalty for speeding in the pit lane.

The greasy conditions at the circuit would once again claim a victim, this time Malucelli in the #51 Ferrari, who went straight on at Mulsanne corner with minimal damage to the front, but rejoined.

Also in Pro there was a shuffle at the front, with Lieb handing over to Lietz and a change of tyres forcing the Porsche team to yield their lead. 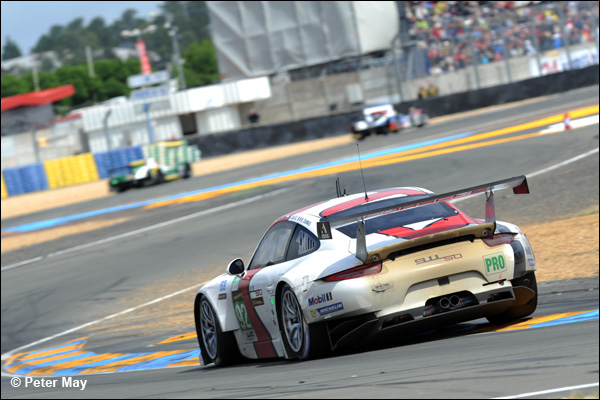 The battle for third overall was heating up once again, with the pit stop cycle causing the #7 Toyota and #3 Audi to swap places, Lapierre was lapping much quicker than Jarvis though, and caught up on track in an attempt to salvage a podium for the slower, but steadier #7 Toyota. It resulted in an epic scrap with just over two hours to go in the race, Lapierre pushing so hard he ran off the track at the exit of Indianapolis at one point.

Jann Mardenborough continued his blistering pace during what would be his final stint of his debut race. Constantly setting fastest sectors for the #42, and eventually setting the car’s best lap – 3:40.100.