The final 120 minutes of the race began with rain reported on the Mulsanne Straight and with the expected news that the #45 Oak Morgan had been officially retired.

Richard Lietz was the first to be caught out by the change in conditions, with a spin at Tertre Rouge in the #92 Porsche. The works driver quickly recovered, but the gap from the leading #97 Aston rose from six to 20 seconds.

The #97 came in for a tyre stop, but appeared to only change the front tyres in order to save time.

Olivier Pla, determined to not go unnoticed, put in a 3:38.059 – the fastest lap for the LMP2 class this year – half a second quicker than his pole time.

Patrick Long’s determined drive was successful as he managed to get past Cioci in the #61 AF Corse Ferrari on track, giving the Dempsey Racing Porsche a spot on the podium once again.

The #42 Greaves Zytek had an issue with the left tyre pressure issue which indicated a puncture, forcing the team to bring Jann Mardenborough in for an unscheduled pit stop.

There is a continuing flurry of cars setting very rapid lap times up and down the field, especially in GTE Am, where Jamie Campbell-Walter and Paulo Ruberti were setting fastest sector times for their respective cars.

After a race long struggle from the Oak Racing “art car” the shutters were finally lowered on the garage, with just one and a half hours left to run.

Many GTE cars were lapping quickly, but the #71 458 of Vilander was maybe pushing a bit too hard. The Ferrari was sitting in a solid fourth spot, but lost a lot of time in the gravel at Mulsanne Corner when Toni slipped off the circuit.

The Dempsey Racing Porsche’s pace under the influence of Patrick Long was getting quicker and quicker by the end of Hour 23, with Patrick getting the most out of the car and taking it to the ragged edge lapping just two tenths from the GTE Am pole time.

GTE Pro seemed to be destined to come down to the wire. The #97 and #92 were once again extremely close together. The Porsche had the lead but was being quickly reeled in through slower GTE Am traffic by Mücke who had fresher tyres – their strategies till the end were expected to be similar.

As this was going on, LMP1 exploded into a drama filled mess – the #1 came in for an un-expected stop due to fears of a slow puncture. The Audi would remain on slicks, but the Toyota team would find themselves in a heap of trouble. Torrential rain started at the Porsche Curves and Nicolas Lapierre went straight off into the barriers in the #7 car, the Frenchman caught out on a stream of water across the circuit. Nicolas jumped out of the car.

The rain soon arrived everywhere – The GTE Pro lead pair first into the Toyota accident zone and the leading Porsche continuing, on slicks, and the Aston pitting for full wets (as did the #91 Porsche). The Aston though has now been refitted with slicks! For now it’s a Porsche 1, 2.

The #46 Thiriet by TDS Oreca then spun on the run down from Arnage, the sixth placed car out of the race on the spot. The class leading #35 Morgan span to a halt in sympathy, but was able to rejoin after a delay and pit immediately.

Unsurprisingly, the Safety Car is scrambled and the damaged Toyota – Lapierre back at the wheel – struggled noseless back to the pits and was garaged immediately, of course.

During the Safety Car period confusion, Pla in the #24 would emerge four minutes behind the leader, split up behind a trailing Safety Car. Long also lost out in the confusion, after holding third spot – he pitted the car and ended up being put a whole Safety Car behind the Cioci Ferrari, losing at least a couple of minutes in the process. 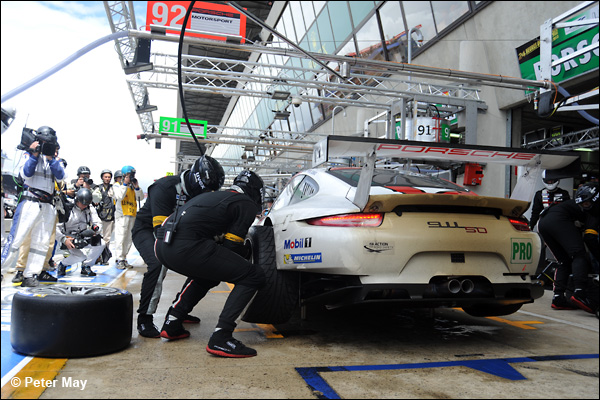 The #92 Porsche would dive into the pits once again to change tyres, in an attempt to challenge the #97 Aston Martin and secure the win for the debuting 991.

Toyota’s chance of getting both cars to the finish was greatly improve, as, with forty minutes to go, the #7 car had finished being worked on, fitted with full wets and sent on its way in fourth place overall. 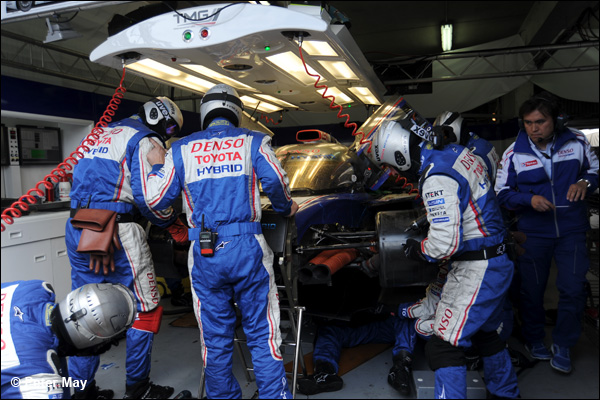 The Safety Car went in with just over 30 minutes to go. By this time the track had an almost fully-formed dry line and the gamble to put slicks on early may well have paid off.

Just before the Safety Car went in, though, the #97 went back in for another tyre change – making the lead battle in GTE Pro between the two factory Porsches. It was revealed shortly after, though, that rain would be expected with 15 minutes left in the race, meaning that tyre strategy would be very crucial for the two battling factory teams.

In LMP1, with a little over 20 minutes to go, the #8 Toyota of Buemi managed to use the Safety Car period to claw his way back onto the lead lap; the TS030 blasting past Kristensen at the exit of the Porsche Curves with an animated Anthony Davidson in the garage shielding his eyes.

Interestingly, the Vipers gambled on their tyres and dived into the pits with 15 minutes left to run to change from full wets to slicks – just as the rain started to fall. It began to get progressively heavier as time went on, to the point where torrential rain was falling all over the circuit by the time Kristensen started his last lap. 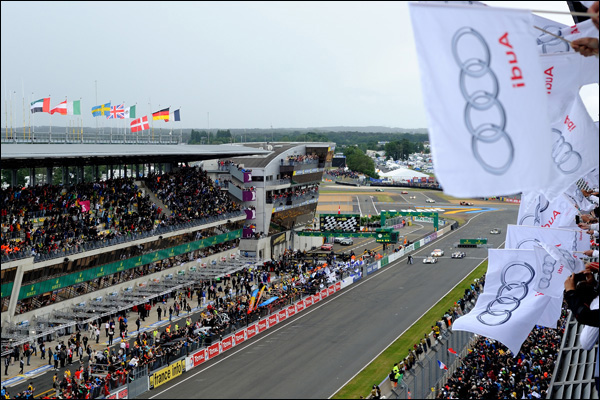 In the end, it was a steady finish for a record breaking number of surviving cars. Audi took LMP1 honours; Oak won LMP2; Porsche crossed the line first in GTE Pro; and, finally, IMSA Performance, with an amazing show of dominance, won an emotional GTE Am class. 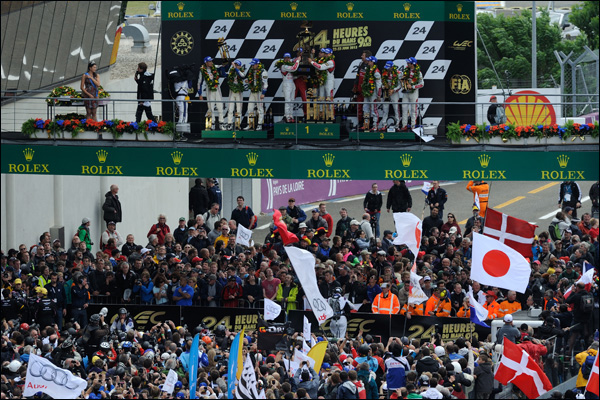 Upon finishing the race, all emotions broke loose up and down the pit lane. Tom Kristensen in particular was in tears when he stepped out of the car and honoured his fellow countryman and friend by kissing the Danish flag on his helmet and giving a speech on Danish TV, before adding on the podium; “We can wait for my next victory at the race, because this race is dedicated to Allan Simonsen.”