The Quinn’s take Queensland by storm.

Tony Quinn was a surprise winner of the first Australian GT race held at Queensland Raceway in the same weekend that Klark Quinn virtually assured himself of the Championship.

With only one round to go, Klark now has a 117 point lead.

The Queensland round would take place over three 40 minute races with a compulsary pitstop. The pitstop time would also be determined by your status as a driver – professional drivers would get a longer pitstops than gentlemen drivers.

The racing wouldn’t feature Jack Le Brocq and the Erebus team that had dominated the previous two rounds changed their focus to Asia, and withdrew from the this event.

Le Brocq was the star of the past couple of rounds and with him withdrawing, the form book was scrapped.

Roger Lago would be the star of qualifying. The Lamborghini driver would take pole from Tony Quinn in his Aston Martin. John Bowe – racing alone this weekend in his Maranello Motorsport Ferrari 458 and Klark Quinn in the VIP Petfoods Porsche RSR GT3.

Race one would be a thrilling affair. The rolling start would be clean but a safety car would come out for a couple of laps after Steve McLaughlin’s Viper and Rod Salmon’s Audi spun. While Salmon got a way, McLaughlin was beached and needed a tow to get going again.

Lago led the restart with Tony Quinn close behind. Quinn would soon overcome the Lamborghini, taking the lead but could never really shake Lago.

Come the compulsory pitstop, Quinn would pit first, putting Lago back in the lead. Lago would stay our for a few more laps, ensuring he could retake the lead.

Quinn was never far behind and the race and drama and controversy would decide the race.

Lago would be called in for a drive through for having too many people working on the car during the pitstop.

This would destroy his chances for victory and send him down field. It would get worse for Lago as a damaged gearbox would rule him out for the rest of the weekend.

That left Tony Quinn to take a clear victory from son Klark and Bowe’s Ferrari.

“The Aston Martin is a good car and suits this circuit. It was great around the first and second corners – very fast corners and it has good brakes too – so it was well suited to the circuit,” Tony said after the racing was finished 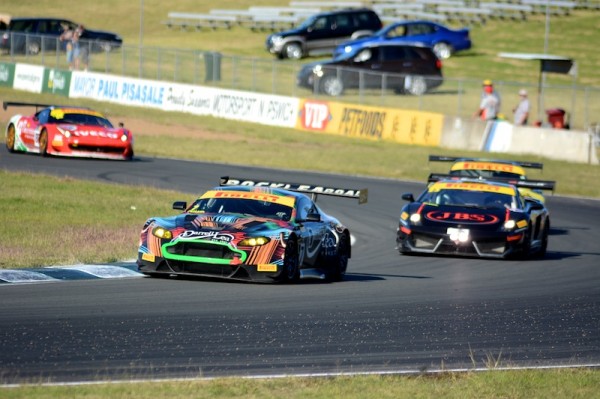 “We had great battles over the weekend – the racing was very fair and very satisfying.”

Race two would take place at night – with only a few lights highlighting the entry to the corners. 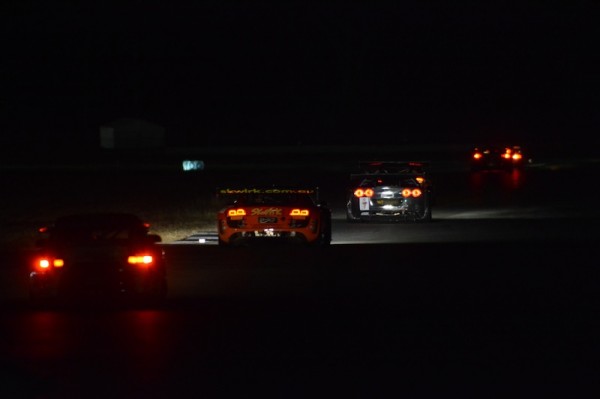 The night racing affair proved to be difficult for some but ultimately led to clean racing.

A key moment in the race was the pitstop by Bowe. Trying to avoid another car in the pitlane (it wasn’t a case of unsafe release), he hit a pole on the pit wall, damaging the right front of the Ferrari. Not only would it put him out of the race but out of the weekend.

This incident would lead to a safety car – also giving the organisers a chance to clear other debris.

There would be some confusion on who was the leader but it was soon sorted with Klark Quinn leading from Tony Quinn and Greg Murphy.

The 28 lap affair would see a great run by Murphy in the Trofeo Corvette C6. He would be challenging for victory but a longer pitstop time – thanks to his professional status would ensure he would finish in second. 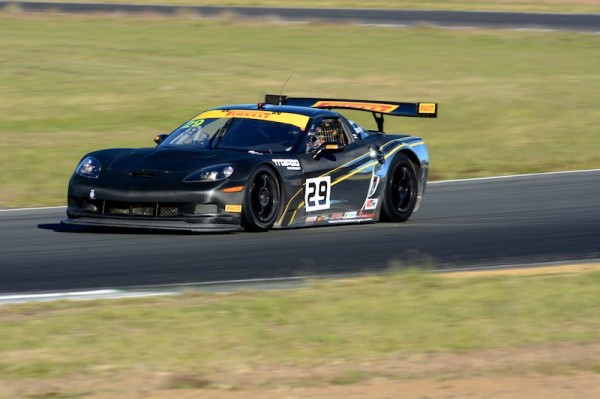 It was Klark Quinn that would take victory – and a step closer to defending his GT Championship crown.

“The night racing was good – I enjoy it and I tend to do fairly well. My night vision is pretty good and I’d think that I have an advantage over the older fellas!” Klark said.

“You have to concentrate on what is ahead of you. You can’t look in your mirrors too much – we were able to put in some fast lap times and get the win.” 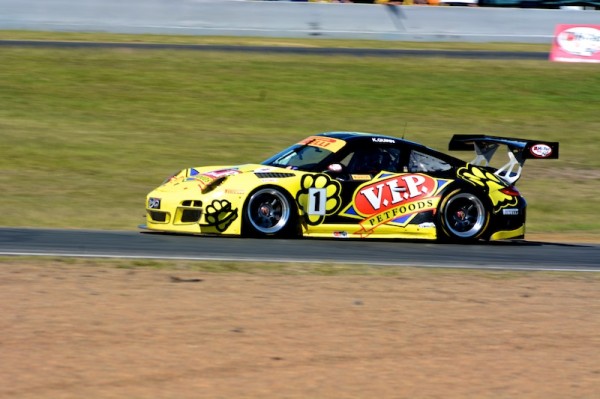 The third race was held in stunning conditions on Sunday afternoon.

Again it would be the Quinns and Murphy that would dominate the proceedings.

Murphy would lead off the start, holding off the advances of Tony Quinn’s Aston Martin.

Come lap nine – at turn three, Quinn would get a great run and coming into turn four, Murphy would lose the lead. 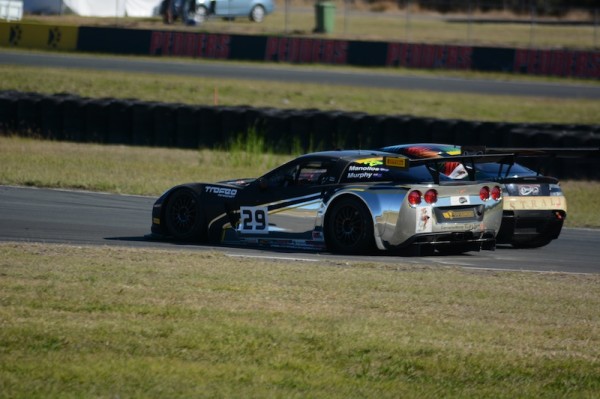 Murphy would keep second until his pitstop – and given his mandated longer pitstop time would come out in fourth. He would battle with the Tim Macrow Audi, running off the track at one point.

Second was to become first for Klark as with just over a lap to go, Tony Quinn’s leading Aston would suffer a gearbox fault and grind to a stop. Quinn reset some electronics in the car and would get going again but his lead was lost.

He would drop to third behind Murphy – still a strong weekend for the Darrel Lea sponsored car.

Klark though would take the win and has virtually assured himself of the Championship with just one race to go.

“It wasn’t an easy weekend! It was a shame that Bowe and Lago weren’t there to battle all weekend but the three of us [Klark, Tony and Greg Murphy] are all experienced – we give each other racing room.”

“It made it really exciting, a thrilling weekend.”

“Next weekend is going to be a huge weekend. The first weekend at New Zealand – people are going to be impressed and I am looking forward to it.”

For Murphy, he had a great return to the GT Championship.

“It was good to get behind the wheel. Last night was really enjoyable in the dark to fight with Klark and Tony. In the day we don’t have the pace and the longer pit stops we would always struggle for the win,” Greg said after the race.

“I was there to go as fast as I can and see what happened, it was good to get the podium results.”

The race will be held in three months time and will be the first race held at the circuit.

Klark Quinn holds a strong lead over Tony after Queensland with Dean Koutsoumidis third after a solid weekend in his Audi.

Words and pictures from Sam Tickell