The 45 minute Qualifying 1 session got under way in damp conditions. The Stratton Motorsport pairing of Olivier Bouche and Pierre Mantello set the pace with a lap time of 2:41.749, which was good enough for pole position by 2.759 seconds over Andrew Jarman in the sister Stratton Motorsport car. 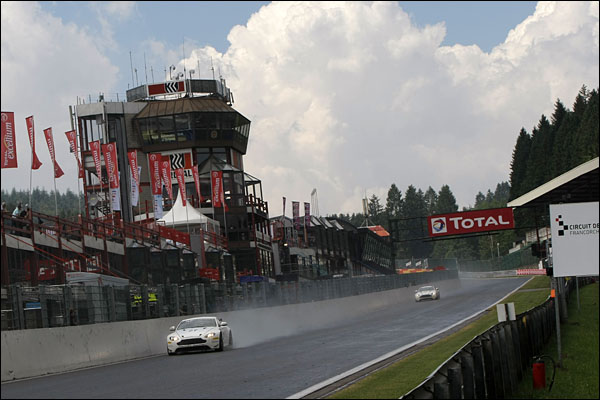 The field was spread considerably by the nature of the track and, for many of the drivers, Qualifying 1 was their first track session of any real length. Bolaji Odunsi and Richard Hope took 3rd place in their dark blue Track Club prepared car, ahead of Jan Andersen in the #88 Barwell Motorsport car, his co-driver Mark Lemmer sitting the session out to offer advice from the pit wall. 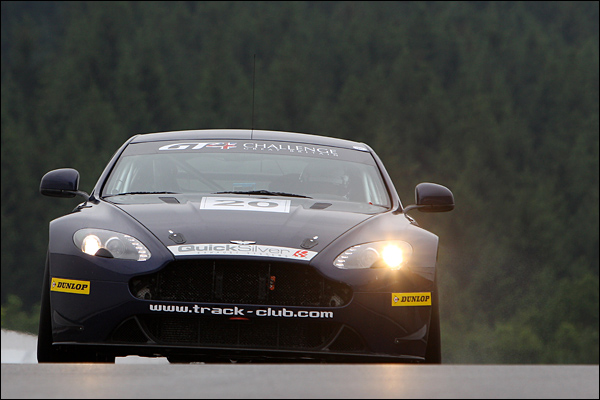 Adrian and Clare Johnson qualified in 5th position with Tim Eakin and Richard Taffinder just 0.397 of a second behind in 6th. 7th place was occupied by Calum Lockie & Kevin Norville, who were suffering with gearbox issues during the session. Mike Brown & Paul Cripps took 8th in their MB Racing machine, followed by Tom Black & Chris Kemp in 9th. 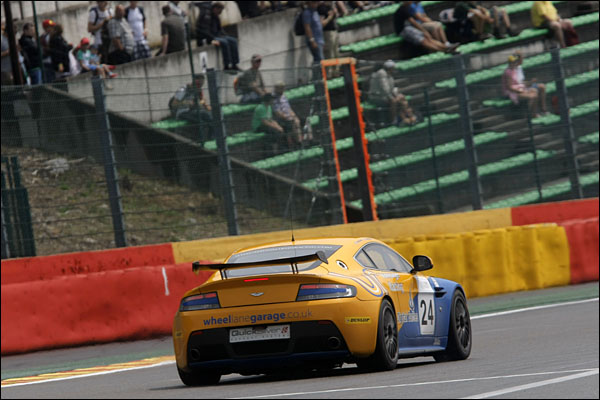 The #14 Adrian Johnson Racing car suffered a spin and contact with the barriers, unfortunately the car was unable to start the first sprint race as a result. 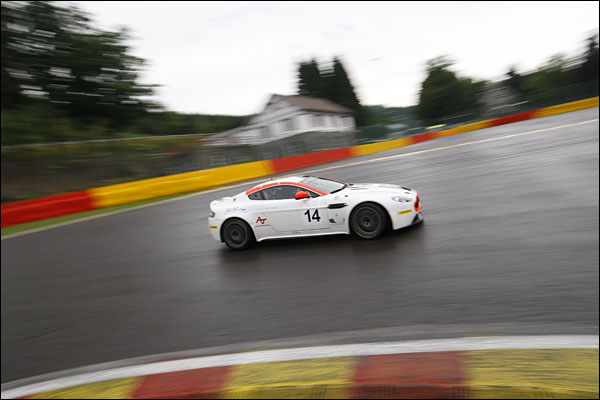 Qualifying 2 started very wet, however the track was drying throughout the session. Barwell Motorsport’s Mark Lemmer set the pace with an impressive time of 2:55.402 in the #88, shared with Jan Andersen. 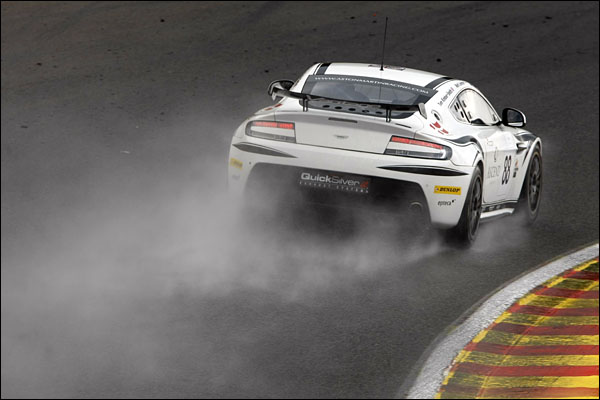 This time was good enough for pole position in the 60 minute Endurance Race by 6.311 seconds over Olivier Bouche and Pierre Mantello in the #22 Stratton Motorsport car. Olivier narrowly missed out on a lap on slick tyres at the end of the session, so it was a case of “what might have been” for the French and Belgian pairing. Bolaji Odunsi & Richard Hope were only 0.8 seconds behind in 3rd, with Andrew Jarman, driving solo a further 0.4 seconds back in 4th. 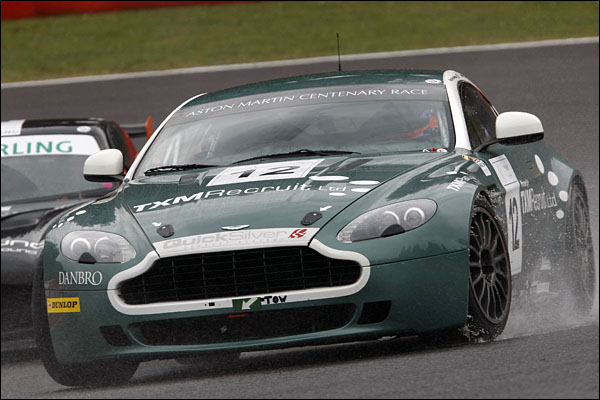 Paul Cripps & Mike Brown took 5th, less than a second from Andrew, just ahead of a close fight for 6th between Vantage Racing and Hills Racing. 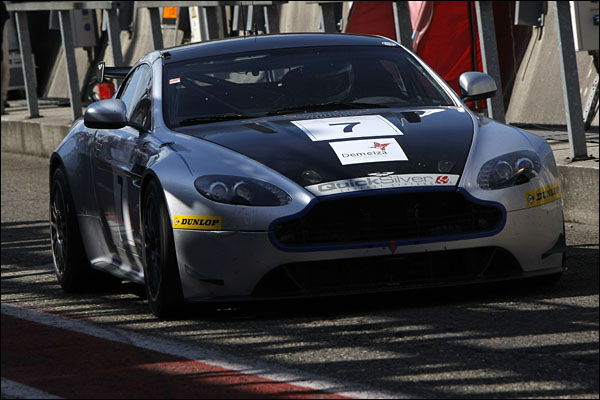 At the end of the session, it was Tom Black & Chris Kemp who held 6th, with Tim Eakin & Richard Taffinder just edged out by half a second in 7th. Adrian & Clare Johnson qualified 8th, with Kevin Norville & Calum Lockie 9th, having suffered mechanical issues during the 45 minute session.

The conditions were very wet for the start of the first sprint race, with the field being immediately jumbled by the standing start with many cars struggling for grip. 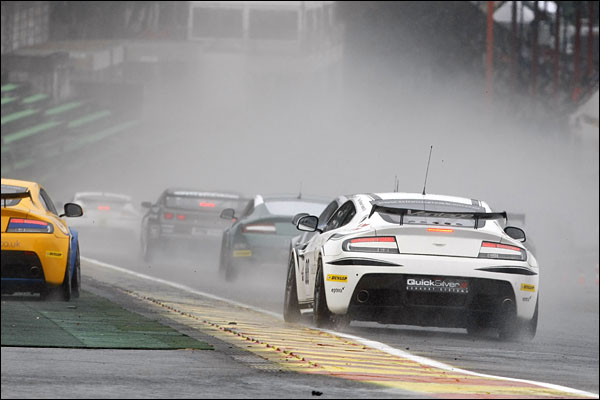 Calum Lockie jumped from 7th on the grid to 2nd , finding tremendous traction in the Track Club #27 car. 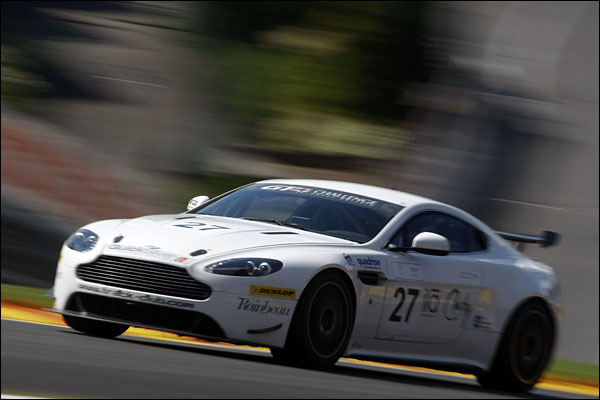 At the end of the first lap, the running order was Calum Lockie leading with Olivier Bouche in 2nd and Andrew Jarman holding 3rd. Fourth place was occupied by Bolaji Odunsi , followed by Tim Eakin, Paul Cripps, Tom Black and Jan Andersen. 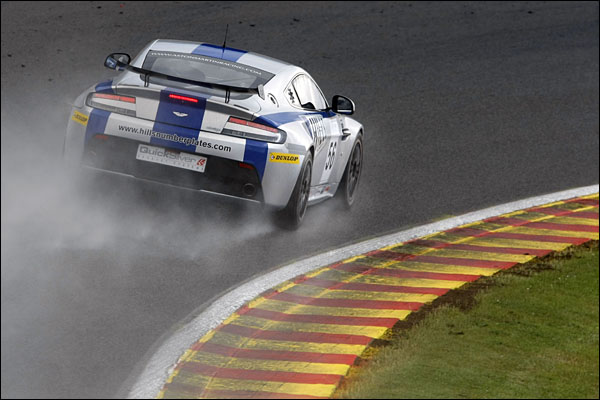 All the GT4 Challenge runners were mixing it with the Dutch GT and other local competitors, a great effort given the differing levels of experience around the Spa circuit.

Over the next few laps, the field behind Calum & Olivier was contracting, allowing cars #24 Vantage & #88 Barwell cars to pass Odunsi in the #20 Track Club car. At just over half distance, Calum Lockie was still leading from Olivier with Andrew holding 3rd. There was close fights throughout the field as the closing stages approached, with all cars finishing on the lead lap despite the appalling conditions. 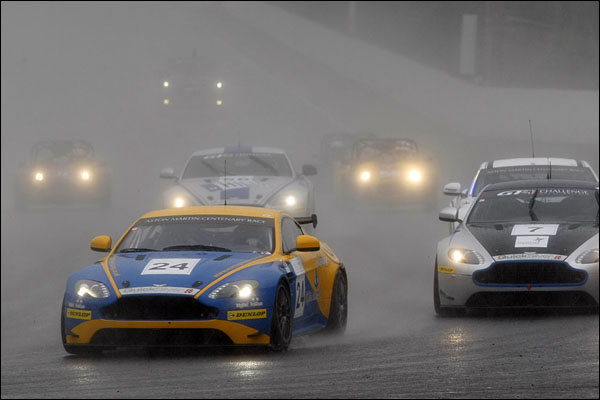 At the flag, Calum Lockie took the win over Olivier Bouche by 7.702s once his Silver Driver time penalty had been applied. Calum looked comfortable for the win for the whole race, his experience allowing him to deal with the conditions and traffic with ease. 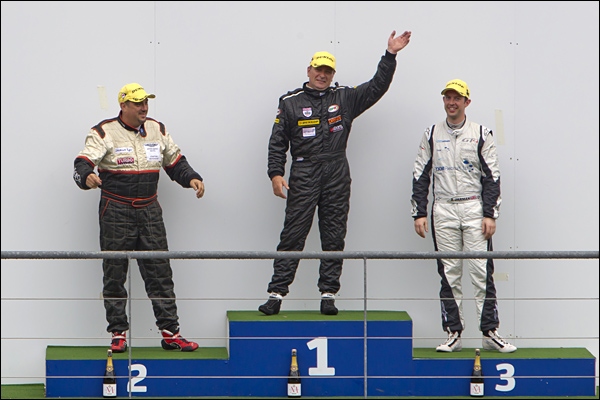 Andrew Jarman held 3rd place to continue his consistent run of results. MB Racing’s Paul Cripps took 4th, 4.2 seconds ahead of Tim Eakin in the #56 Hills Racing machine. Tom Black was 6th, just under 3 seconds ahead of Jan Andersen in 7th. Bolaji Odunsi rounded out the field in 8th, having dropped back after a good start.

By the time that the Endurance Race got underway late on Friday afternoon, the sun had finally decided to make a welcome cameo at the circuit. The track was hot, dry and with a conventional GT rolling start, the GT4 Challenge field was back in slightly more familiar territory. 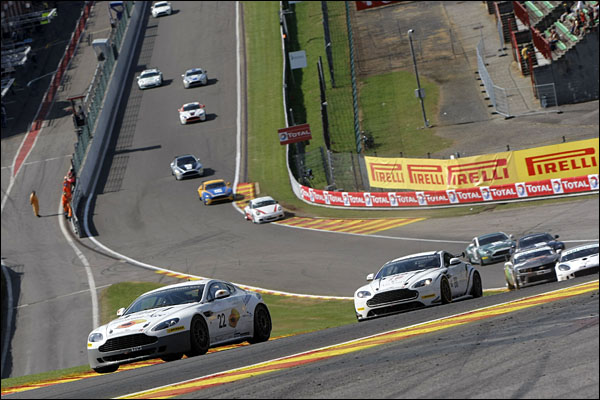 A clean start followed the lights going green, with everyone negotiating La Source without any major incidents. The running order after the opening exchanges was Mark Lemmer in the #88, ahead of Bouche in the #22, with Bolaji Odunsi holding 3rd after another strong start. Mike Brown in the MB Racing #7 was holding 4th over Tom Black, with Andrew Jarman in 6th, Tim Eakin 7th, Adrian Johnson 8th and Calum Lockie 9th. 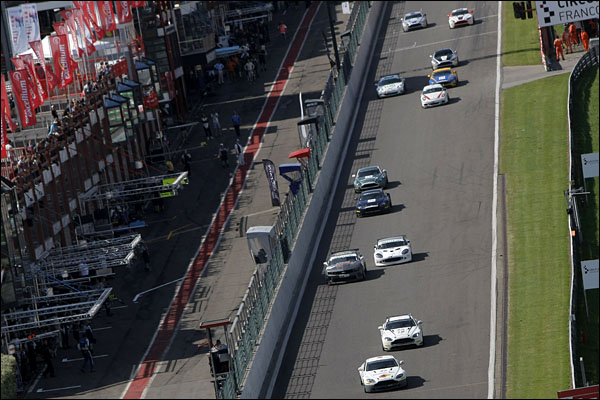 A few laps later, Olivier had closed to up to Mark in the lead and was harrying the Barwell driver. Tim Eakin in the #56 Hills Racing car suffered a spin at the chicane, but was able to continue without any further issue. 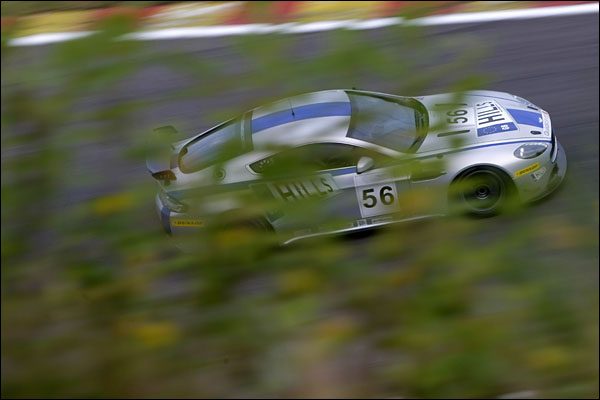 At the 20 minute mark, the lead had grown to 7 seconds, with Barwell Motorsport leading Stratton Motorsport, MB Racing held 3rd, 29 seconds back. The pit window opened and closed without incident, with all the cars meeting their minimum pit stop times. 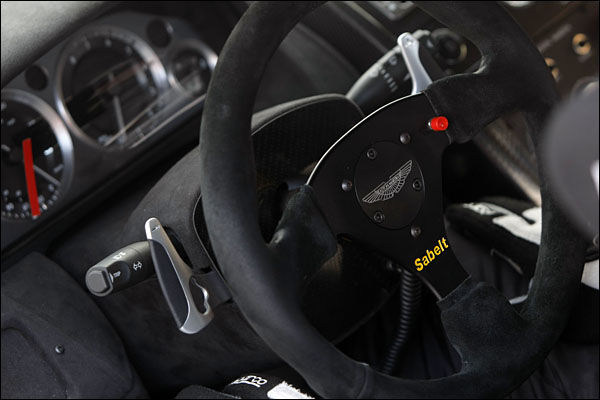 After all the pit stops had been completed, the #22 car of Olivier Bouche led the #88 Barwell car, now driven by Jan Andersen, with Paul Cripps in the #7 MB car holding 3rd. Olivier steadily pulled away from Jan, to create an eventual lead of one lap at the flag. 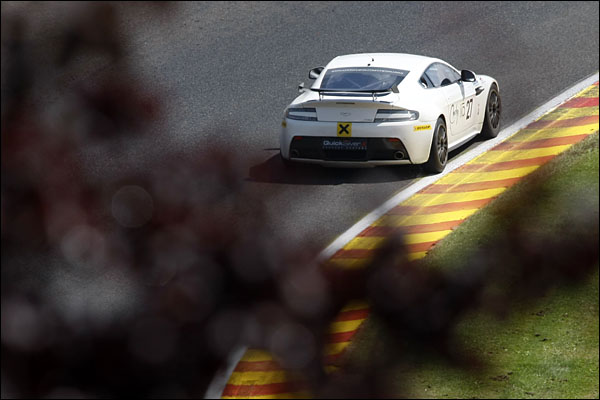 In the closing stages, Andrew Jarman caught up to Jan in 2nd place, to finish only 2.589 seconds behind the Danish driver. At the end of the 60 minute race, Olivier Bouche in the #22 Stratton Motorsports car took a commanding win, with Jan Andersen 2nd for Barwell and Andrew Jarman completed the podium for Stratton. 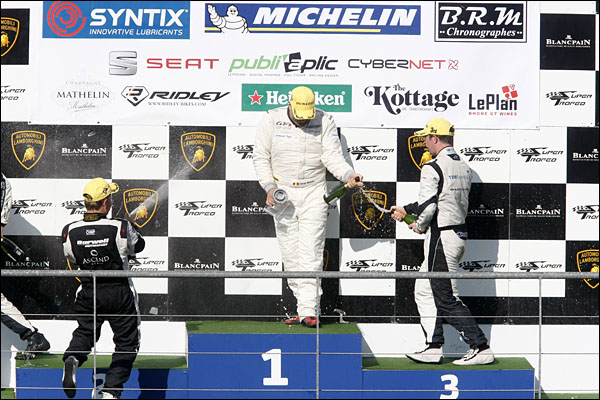 Superb drives by the whole GT4 Challenge field, to cope with a number of GT3 & space frame cars coming through the pack.

The second 30 minute Sprint race took place on a wet, but drying track. The start, once again from a standstill was very tricky for the drivers to manage, particularly when combined with a very short hold period before the lights went out. 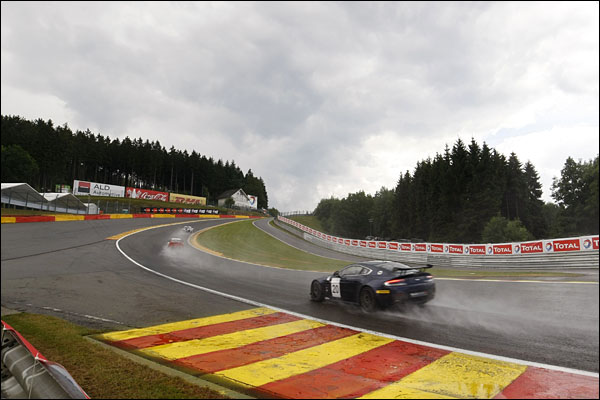 As the lights went out, Andrew Jarman in the #12 Stratton car leapt to the front from his 3rd place grid slot. Bolaji Odunsi in the #20 Track Club car also made a decisive start as others around him fought for traction. By the end of lap one, Andrew was holding a 2 second lead over Bolaji, with Mike Brown in 3rd place. 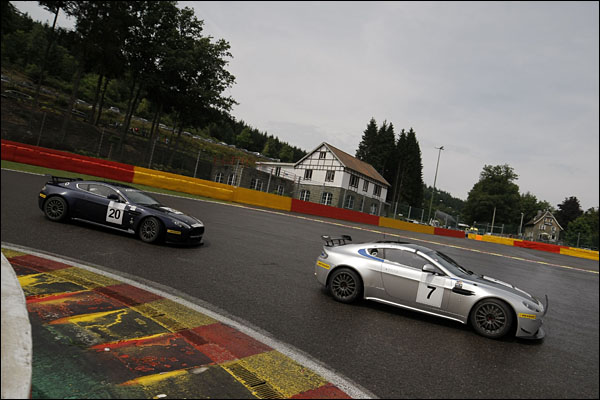 On Lap 2, Mike made minor contact with a Dutch GT BMW M3 at the chicane, the M3 spun, however both were able to continue. The field was very close with a huge scrap between cars 14, 7, & 24, leading to some three abreast action at the bus stop chicane.

By lap 4, Bolaji had dropped to 5th, however, Adrian Johnson in the #14 car had been making brilliant progress to 2nd place. 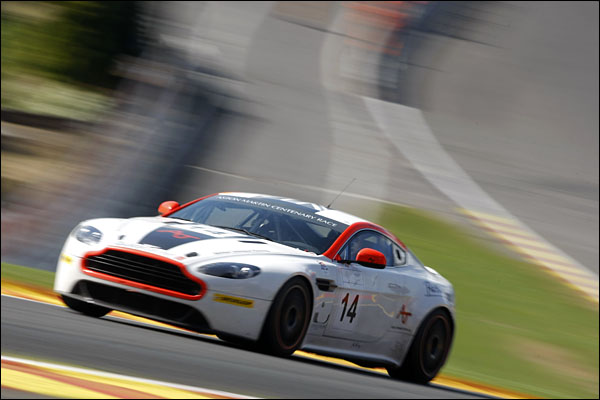 As the laps were reeled off and more traffic was being encountered, Johnson gained time on Jarman once again, to finish just 1.499 seconds behind the #12 Stratton car. 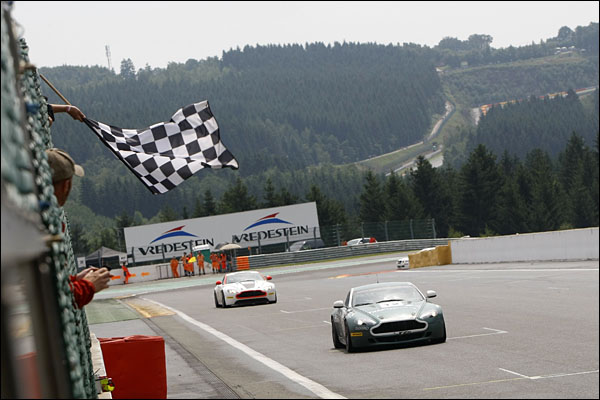 Chris Kemp, made his way to 3rd place at the end, again, making swift progress through the traffic. Mike Brown took 4th place, with Bolaji taking the 5th and final position. 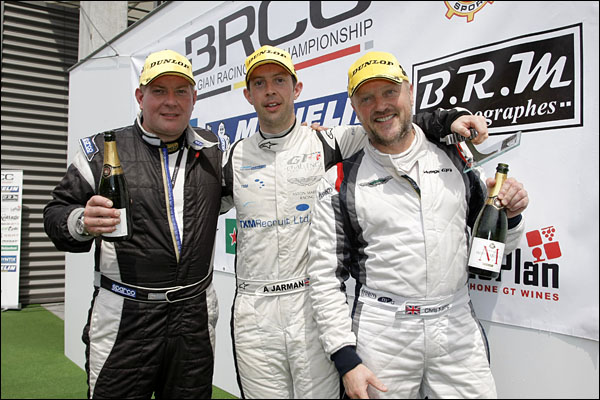 The next round of the GT4 Challenge of Great Britain takes place at Snetterton on September 28th. Anyone interested in hospitality passes to attend as a spectator/guest or competing in the race on an ‘arrive and drive’ basis with Stratton Motorsport should go to www.astonmartin.com/gt4challenge for further information.