It was with some trepidation that I sent an email to Ann Barnes of the Bentley Drivers Club to enquire about attending this year’s Bentley Drivers Club event at Silverstone. As a huge Bentley fan I love this event and it’s a real highlight of my motorsport calendar, however the past few years when I have been it has rained. Not just normal rain, but rain of biblical quantities. Photographing whilst dripping wet at Luffield corner in 2008 while Derek Bell piloted the freshly converted 2 seater EXP Speed 8 round whilst avoiding inches of standing water was certainly memorable. What made this more memorable was the fact that Mr Bell’s passenger was none other than Prince Michael of Kent who had joined the club for a day as a guest of honour. 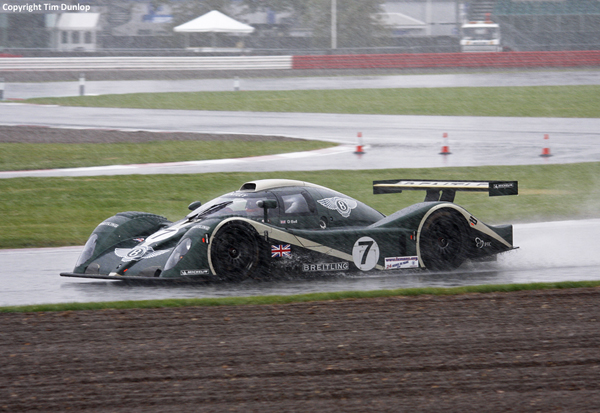 However with the superb weather the UK has been enjoying over recent weeks I thought there might at least be a chance of clear skies and sunshine all day. Thankfully I was right, despite it being overcast at times the sun shone on Silverstone on what was another superb event. Bentleys of all ages, styles and models from across the UK and Europe made the journey to the Northamptonshire circuit for one of the key events in the club calendar. The queue to get into Silverstone looked like something from the set of Downton Abbey with period costume and picnic hampers being the order of the day. 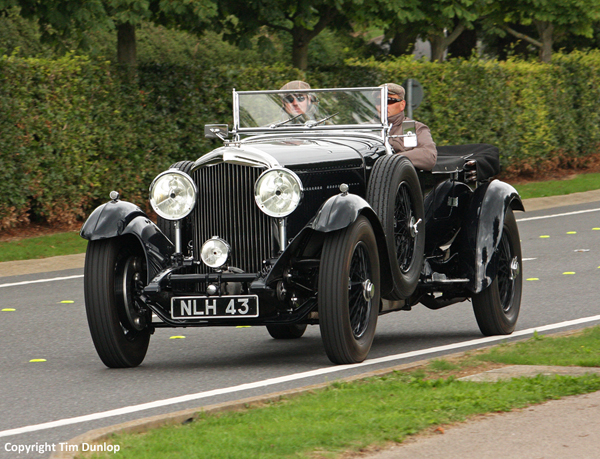 The main focus of this year’s event was of course a celebration of Bentleys success at Le Mans. 90 years ago a 3-litre competed in the gruelling Le Mans race on the weekend of the 26th-27th May 1923. The car driven by the London agent for Bentley J.F.Duff and official works driver F.C.Clement, came 4th having covered 1201 miles at an average speed of 50.055 m.p.h. This was an incredible achievement considering it rained heavily and the road was muddy; even with broken headlights and a 2 ½ hour fuel tank repair the Bentley broke the lap record many times. How different things would have been if Duff had not entered. 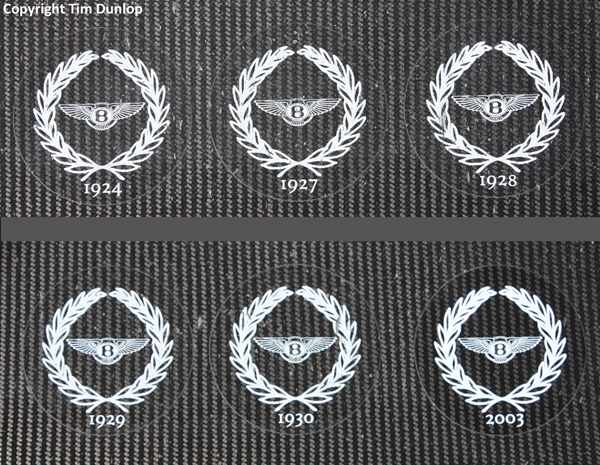 When I enquired to Ann about the timetable she confirmed that this year the EXP Speed 8 would be present on display, but would not be out on track as in previous years. What she did tell me though is that the BDC would be privileged to have the new Continental GT3 at Silverstone to be demonstrated on track by 2003 Le Mans Winner Guy Smith. The GT3 will mark the return of Team Bentley to track racing in 2014 and Silverstone would be only the second time the car has been seen running in public. 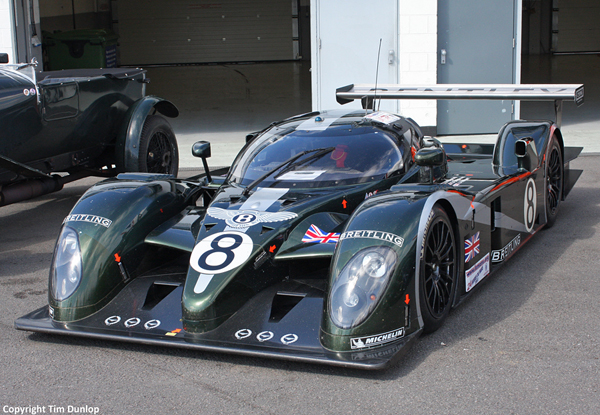 The morning of the event was given over to practice and qualifying for the afternoons 10 races which would see a mixture of cars from Bentley, AC, Morgan and MG compete in various classes. There would then be a lunch break which was a chance for the gathered Bentleys and their owners take to the track for 3 parade laps with cars lead out by a 1923 3 Litre and featuring cars from across the Bentley range right up to the latest 2013 Continental GT V8. As the sun shone all of the cars looked resplendent having been polished, fettled and where available having their roofs down with the occupants basking in the seasonal good weather. 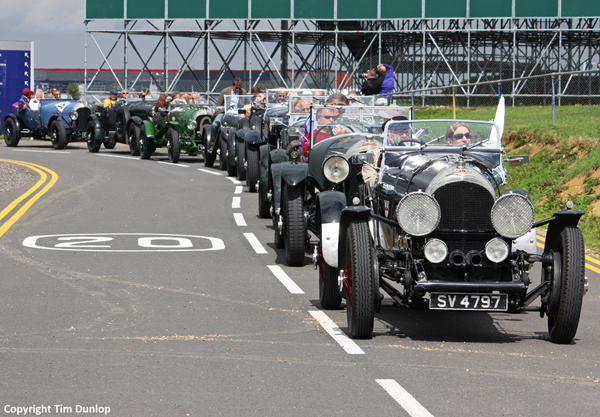 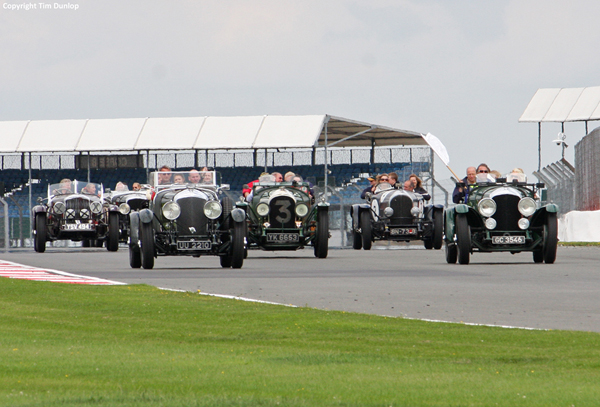 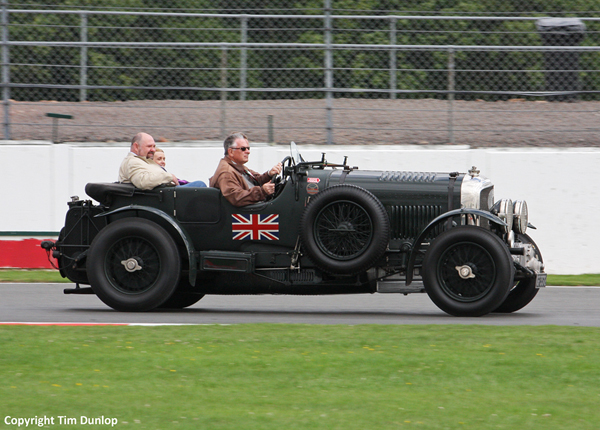 After the cars taking part in the parade had headed back into the paddock it was time for Guy Smith to suit up, don his helmet and take the Continental GT3 down the Silverstone pit lane for the first time. The excitement around the track was evident and enhanced by a very enthusiastic commentator who politely stayed quiet as the car was fired up for the first time and inched towards the track. The spectators watched as Guy completed two installation laps (although he was not exactly taking it gingerly) before a quick dash into the pits for some adjustments before heading back out for the remainder of the twenty minute session. Lap by lap the car seemed to get quicker although Ash Mason from Bentley who was part of the team looking after the car told the commentator that the lap times had been pretty consistent and that they were pleased with the initial data they had got from the car. Thankfully the team had not filled the car full of fuel otherwise you got the feeling that Guy would have stayed out on track all day. He certainly seemed to be enjoying himself. 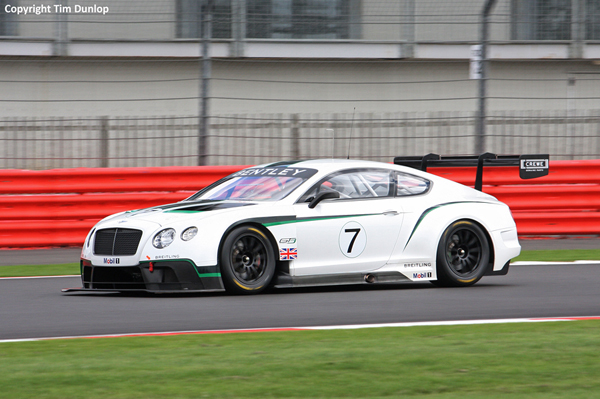 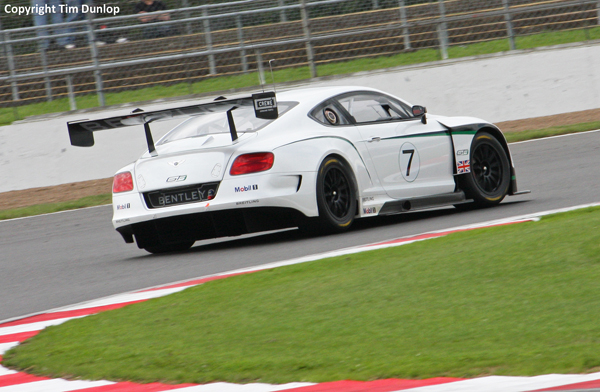 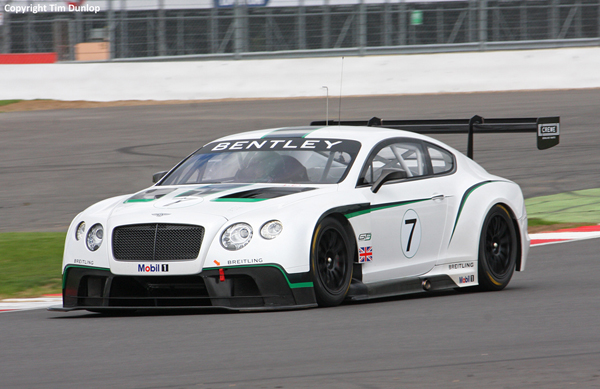 Once back in the pits I managed to grab a few words with Guy. He jetted back into Heathrow from Atlanta on Friday before heading home to Yorkshire overnight and then down to Silverstone for this event. After Silverstone him and the team were going to Snetterton for two days tasting which would be the first time the team had been able to seriously test the car and get some real race mileage on it. After this it was back to the USA for guy and a trip to the world famous Pebble Beach concours. 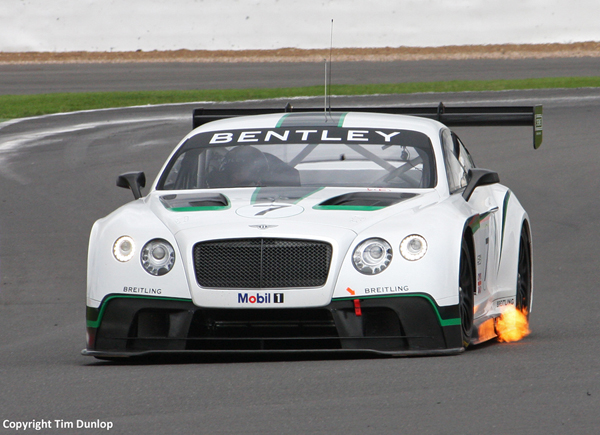 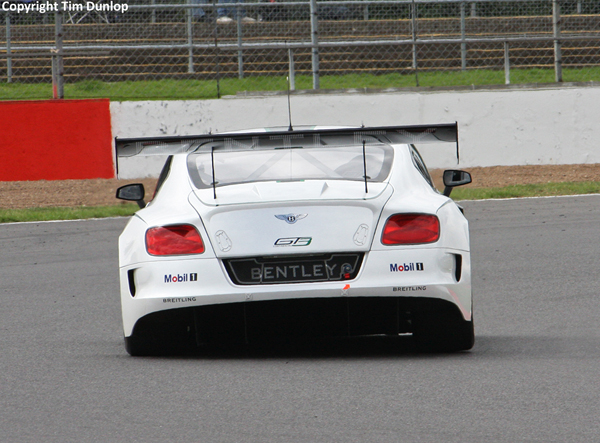 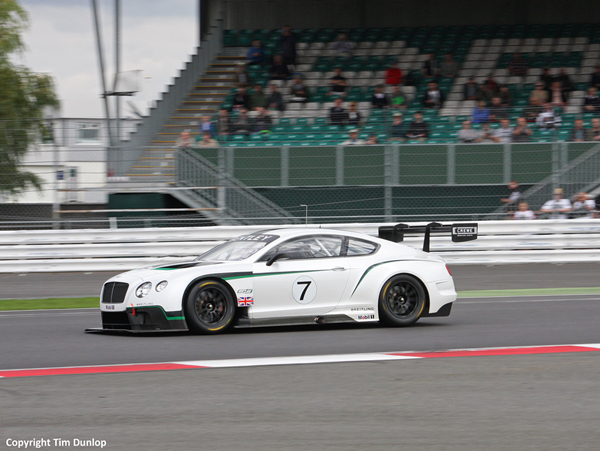 Guy told me that during the ‘demonstration’ laps the car had settled down well and that he was taking the time getting used to GT cars after many years in prototypes and found the lack of downforce the most interesting. At times not knowing whether the moving around of the back of the car was normal or something to be concerned about. He had even found time to play around with the ABS settings whilst lapping the small national circuit sometimes turning it right off and other times having it fully on. He was certainly having fun and I for one am really looking forward to seeing this car race in anger in 2014 when hopefully it will be joined by its sister car which is currently in build at M Sports headquarters in Cumbria. 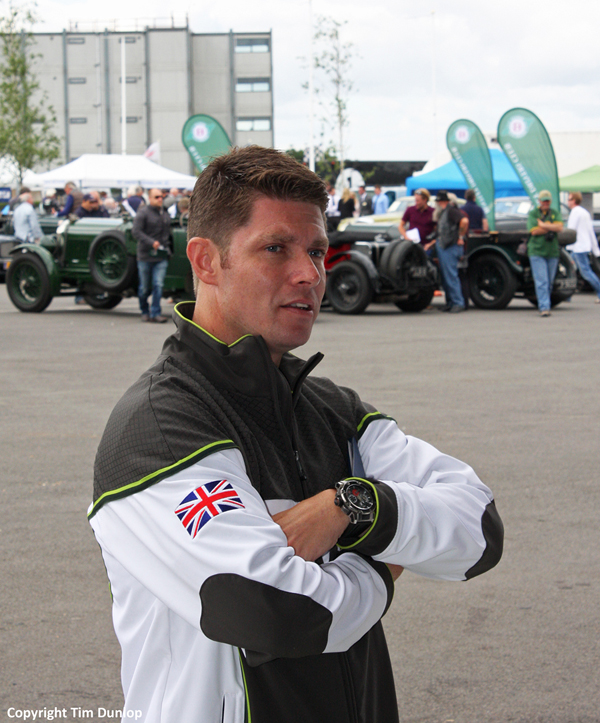 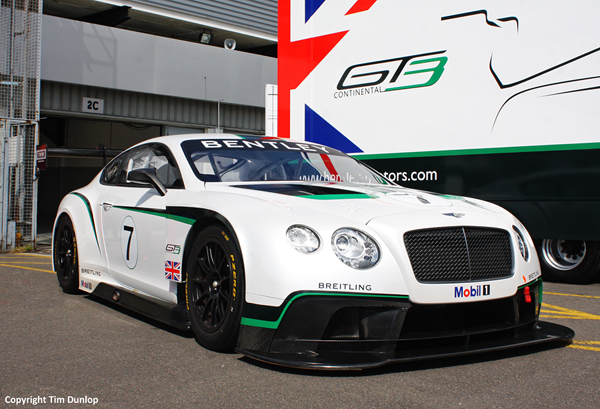 After lunch it was time for some more track action with the day’s race programme and as ever the BDC racing produced very full yet diverse grids. In particular the fourth race of the afternoon comically titled the ‘Bentley Scratch Race’ saw a great selection of cars from a 1921 Bentley TT 3 Litre right up to the 2005 710bhp Continental GT ‘Racing’ of Simon Worthington with the superb looking Bentley T Special of Michael Haig thrown in to enhance the diversity. Haig had set the fastest qualifying lap with a 1.11.042 and lined up on pole with Worthington just under a second behind on the front row. Unfortunately a problem for Haig on the formation lap meant the T Special would make the start but would spend the first lap losing places before heading to the pits at the end of lap 1. This left Worthington untroubled at the front of the race and he would lap almost all of the field eventually finishing the 13 lap race over 59 seconds ahead of Sue Shoosmith who took second in the 1951 Bentley MKVI Special. 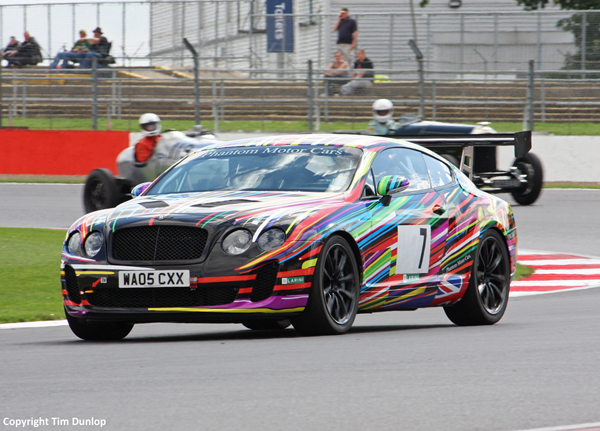 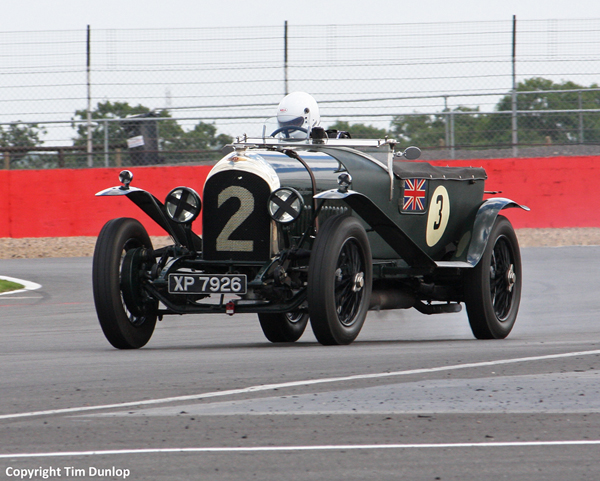 Back in the paddock the Bentley staff were getting the cars assembled for a quick photo shoot to commemorate the gathering of the 1923 3-Litre, the 2003 EXP Speed 8, the new GT3 race car and a GT3 road car. A fair bit of pushing and pulling got the cars lined up and the assembled photographers took the opportunity to get some pictures of the four cars and also the new Bentley Motorsport team. 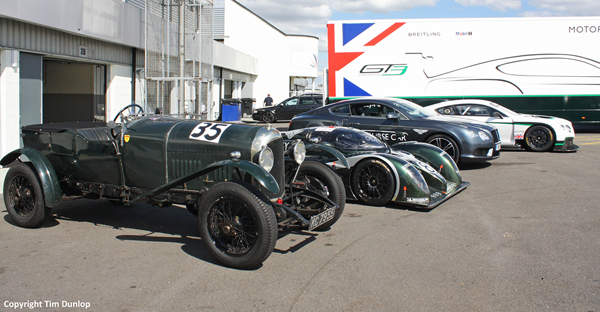 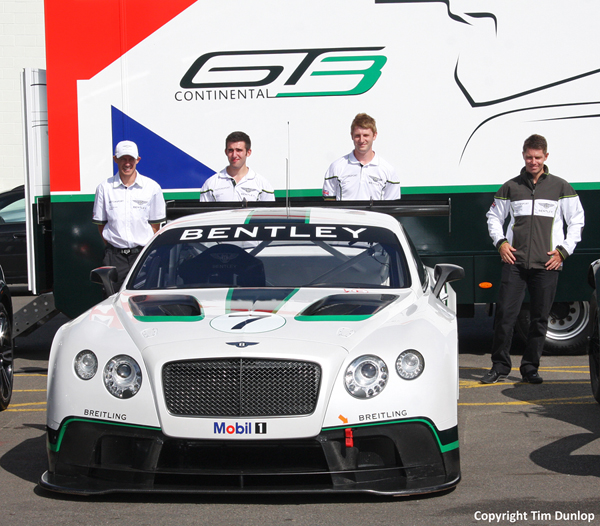 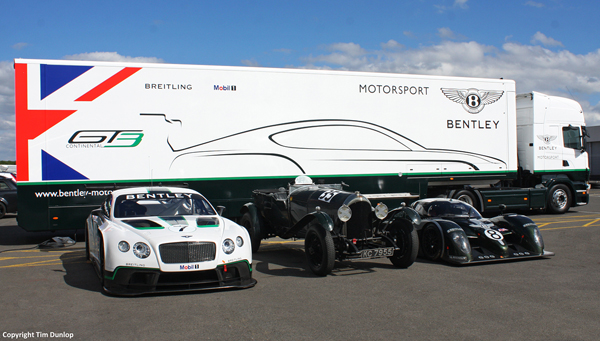 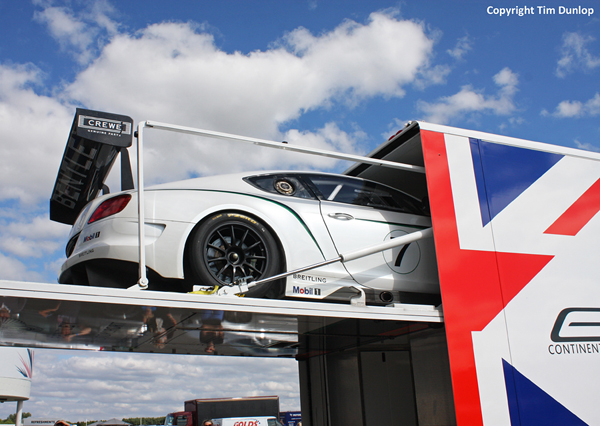 This was a great occasion and one that I am so glad that I made the effort to be part of. 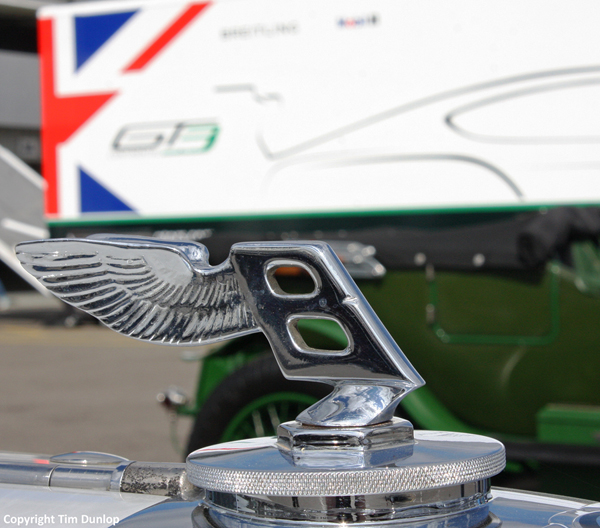 Words and Pictures By Tim Dunlop