The weather couldn’t have been better – for spectators at least – as the race start approached; 26.7°C air temperature, 21.1°C track temperature, 6.4kph wind speed and 31% humidity. The Brazilian national anthem was sung – my goodness, that’s a long anthem – and the highly colourful samba dancers shook their various bits. We also had a minute’s applause in memory of Allan Simonsen – his car sitting proudly on GTE-Am pole.

At 11:52 the grid was cleared and the cars prepared to move off. Marcel Fässler and Allan McNish shared the front row in the #1 and #2 Audis, with Stéphane Sarrazin and Nicolas Prost sitting behind them in the Toyota and Rebellion P1s. Row three was shared by P2 pole-sitter Mike Conway, in the #26 G-Drive Oreca, and Nic Minassian in the #49 Pecom Oreca. GTE-Pro pole-sitter Pedro Lamy found his #98 Aston Martin Vantage V8 sharing the seventh row with the #25 Delta ADR Oreca of James Walker, while Nicki Thiim was on Row 11 in the #95 GTE-Am pole-setter. Davide Rigon was alongside in the #81 8Star Ferrari 458.

At 11:57 the pace car moved off and the formation lap began. The red Audi almost came to a halt as he bunched the grid before peeling off and we were away! 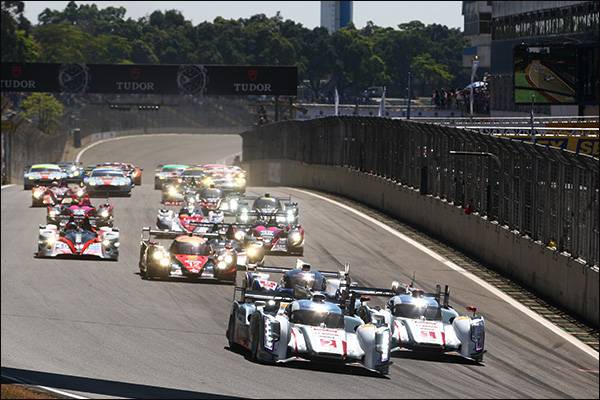 Fässler’s lead lasted for about three seconds as McNish went round the outside at T1. The #1 had no immediate response and the #2 led the first lap. Sarrazin held station in third, with Prost fourth.

P2 saw little change, other than Dominik Kraihamer finding a way past the #41 Greaves Zytek in the #32 Lotus, but the GTE classes saw quite a shake-up in the opening moments; Marc Lieb briefly bursting through to the head of the class in the #92 Porsche but heading for the pits with a broken front right wheel after just eight minutes. Fortunately, a wheel change was all that was required and the RSR resumed. Lamy regained the lead, but by Lap 7 Gimmi Bruni was up into the class lead in the #51 AF Corse Ferrari. Kamui Kobayashi had also had a good start and was up to third in the #71 AF 458, with Darren Turner fourth in the #97 Aston. 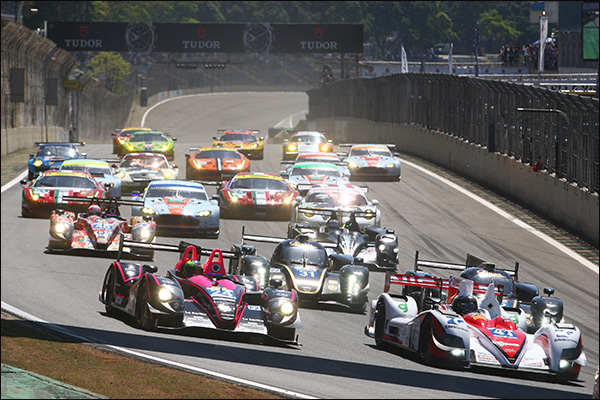 Björn Wirdheim regained the position he lost to Kraihamer after 12 minutes – Lap 7 – but Conway’s lead had extended to more than two seconds by this point.

McNish – as usual – wasn’t hanging around at the front of the field, the #1 holding a 3.734s lead over Fässler after 11 laps. The Toyota had dropped away to the tune of seven seconds by this stage, while the Rebellion Lola was 40 seconds off the lead in fourth.

The fight for second in GTE-Pro was closing up nicely, with Lamy, Kobayashi, Turner and Senna all getting close together. DT got alongside the Japanese driver at one point on Lap 14, but the Ferrari just managed to close the door. Moments later, however, the P1 leaders came through and Turner saw his chance – the #97 sneaking through as Fässler went by.

Trouble for the Larbre Corvette, the #31 Lotus and the Delta-ADR Oreca, as both found themselves visiting the pits very early. All three cars returned to the race after losing several laps, but the Corvette of Fernando Rees was back in a lap later and in the garage as the Larbre team looked at the engine. The issue with James Walker’s Oreca was sparkplug-related.

But as one of the two Brazilian drivers in the race hit trouble, the other was looking to make progress; Senna all over Kobayashi in the hunt for fourth in Pro. By now, though, the P2 field was swarming by and the #99 Aston found itself with reduced opportunities.

With half-an-hour gone, the order in each class was as follows:

A slow 23rd lap for Marcel Fässler (1:26) dropped the #1 Audi back a further three seconds, but the R18 was back on the pace the next lap. But while the Audis were lapping at 1:23, the Toyota was about a second slower and six seconds adrift in third.

Suddenly though Sarrazin had bigger things to worry about as the #32 Lotus moved across on the TS030 and both cars hit the tyrewall at Turn 3 at speed. The Safety Car was immediately scrambled, but there were several anxious moments before we saw signs of movement from the blue and white car. Suddenly the Toyota reversed, but was clearly heavily damaged at the front. The driver hopped out and tried to remove the bodywork before getting back in and restarting, but struggling to move the car again. Kraihamer, meanwhile, was out of his car unaided and behind the Armco. The in-car footage from the Toyota strongly suggested that the Lotus had encountered a sudden mechanical issue that forced it right. Whatever the cause, it was soon apparent that the Toyota’s race was unfortunately run. 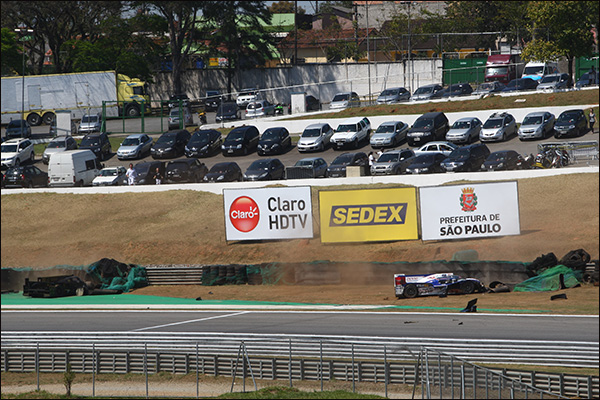 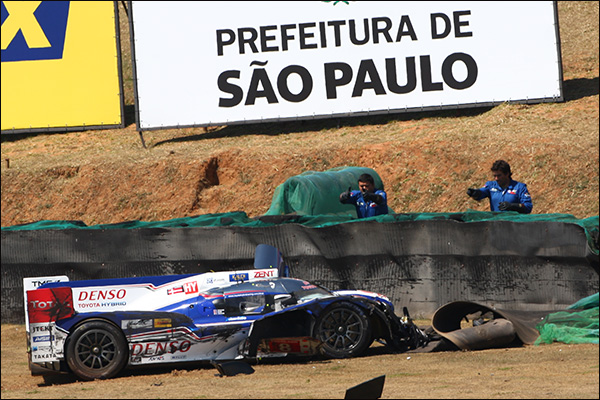 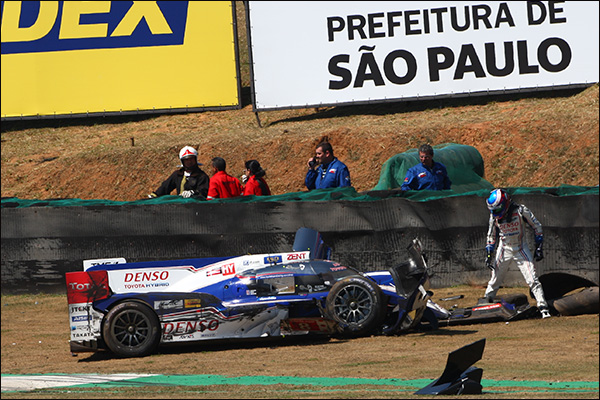 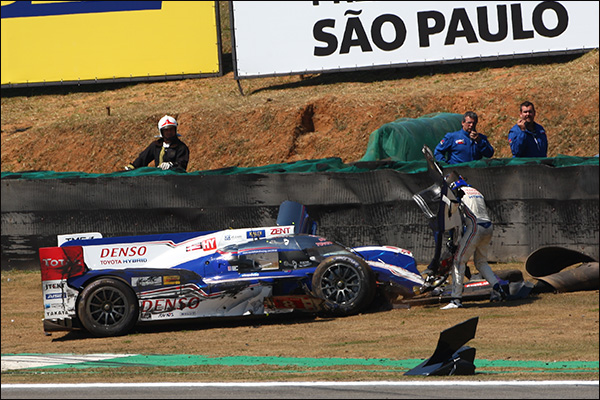 With so much debris, this was going to be a lengthy delay and the teams began to prepare for the impending pitstops. McNish led the cars in at the end of Lap 30 – 49 minutes gone – and the #2 took on tyres and fuel. The car had lapped the entire P2 field twice before the caution, with the exception of the G-Drive and Pecom cars. This meant that Conway and Minassian were now almost a lap ahead of the third-placed OAK Morgan.

The Rebellion Lola stayed out and now led the race, while Jacques Nicolet had risen to third in P2 in the #45 OAK ‘Art Car’ after also staying out. The top four in GTE-Pro and the top two in GTE-Am also elected to stay out, moving Bruni to tenth overall. Matt Griffin had found himself unable to progress from the back of the grid, so AF made the decision to install Jack Gerber in the #61 under the SC conditions. Thiim brought the Am leader in a lap later, handing the class lead to Stuart Hall in the #96 Vantage.

The first hour ended with the field still under Safety Car conditions.