Although I hardly see any classic car racing nowadays, other than begin a support race at one of the major international sportscar and GT series, the Historic Grand Prix at Zandvoort was on my to-do list ever since I knew the date after last year’s edition.

In only its second year the Historic Grand Prix at Zandvoort has already become the highlight of the season at the Dutch circuit. This weekend’s Historic Grand Prix attracted 45,901 paying spectators to the circuit, compared to 16.707 for the FIA GT Series round in July and some 37,000 for DTM last season). Full grandstands and dunes, a packed paddock and lots of happy faces showed the success of the event.

Upon entering the main paddock Porsche could not be missed and the key piece on the Porsche display was a Porsche 917 K. The car was displayed in the red-and-white Porsche Salzburg livery that Richard Attwood and Hans Herrmann’s Porsche was wearing when it won the 1970 24 Hours of Le Mans.

Well-known Dutch race drivers attended the event and participated one way or another and the fans, from all over The Netherlands and even beyond, enjoyed every minute of it.

Former Formula 1 driver and two-time Le Mans–winning Gijs van Lennep joined to drive an old Dutch police Porsche 911 around the track in the Porsche Parade, while two other former Formula 1 drivers were out in 20-year old Coloni F1 cars. One of the drivers was 1988 Le Mans-winner Jan Lammers, the other one Michael Bleekemolen. Lammers, however, lost the 1991 Coloni C4 on Saturday and ended up in the gravel trap at Tarzan Corner- at almost the same moment the second Coloni came to a halt further down the circuit.

Even though most of the spectators probably disagreed with me, I preferred the roaring sound of the 1972 CanAm McLaren M8F driven by 1989 Sebring 12 Hours winner Arie Luyendyk. Relatives of Bruce McLaren visited the circuit on Saturday and witnessed the car thundering down the main straight – almost half a century after the McLaren company was founded.  The noise of the car set off several alarm systems of scooters parked in the paddock. 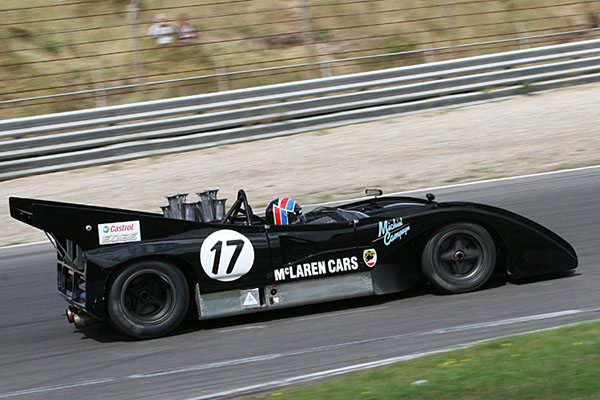 Of course there was some proper racing going on as well this weekend and fierce battles were fought on the circuit in the Dutch dunes. The highlights of the weekend, for the majority of the spectators, were the two FIA Masters Historic Formula One Championship races on Saturday and Sunday. The field of 20-odd F1 cars in near-identical liveries to the ones that were worn back in the 70’s and 80’s resulted in traffic jams to the circuit. 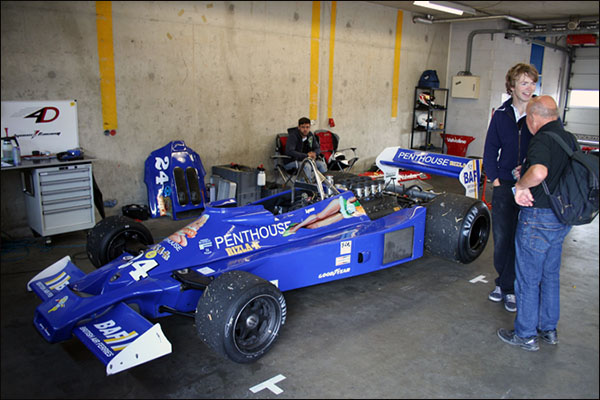 There could only be one winner at Zandvoort though and that was a rather familiar driver, Michael Lyons. A regular in both GT’s (GT Open, FIA GT3) and historic F1 Lyons had a good reason to be happy and relaxed (as shown above). Despite not racing the RAM Williams FW07 he secured pole position and went on to win both races. Perhaps saying he won the races is not right, he dominated – beating everybody, including his parents.

Another double race winner at Zandvoort was Jason Minshaw in the Brabham BT4. Minshaw won his races in the HGPCA Grand Prix Cars 61 – 65  category. Next weekend Minshaw will return to Zandvoort, this time to race the Fortec Motorsports Mercedes SLS AMG GT3 with Benji Hetherington. One thing is sure, we won’t see Minshaw driving through the paddock next weekend like he did this weekend. 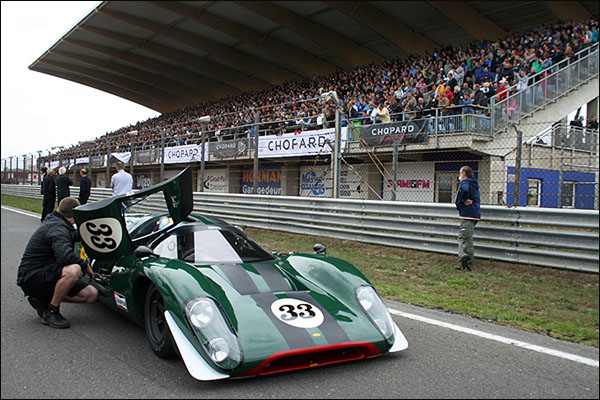 In the FIA Masters Historic Sports Car Championship local hero David Hart qualified his Lola T70 Mk3b on the first row. The Dutch fans loved it, but it wasn’t going to be Hart’s weekend – he retired after nine laps. Steve Tandy finished the race on Sunday in third place – a result he would probably like to repeat next weekend when he returns to Zandvoort with 888 Optimum Racing.

It was however another Lola T70 Mk3b that won the race at Zandvoort as Leo Voyazides and Simon Hadfield recorded yet another win in the series. Initially second behind Hart their #6 stayed within striking distance and when Hart retired it moved up into the lead and maintained that lead to the finish. Manfredo Rossi di Montelera in his Abarth Osella PA1 finished second – 45 seconds behind Voyazides and Hadfield. 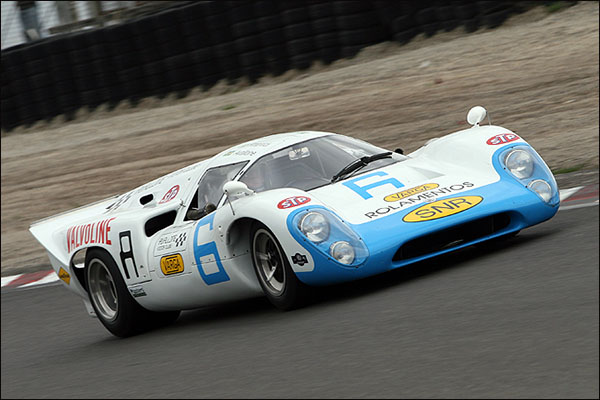 Obviously there was a lot more to see…

There was a lot of attention for the cars previously driven by James Hunt. With the movie Rush having its world-premiere in London on Monday fans (and drivers) seem to like everything that is Hunt there were two McLaren M26s, a Hesketh 308C as well as a March 712 F2-car that wore Hunt’s racing colours. 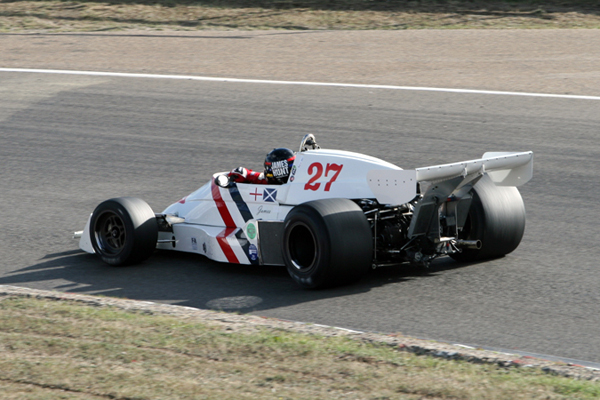 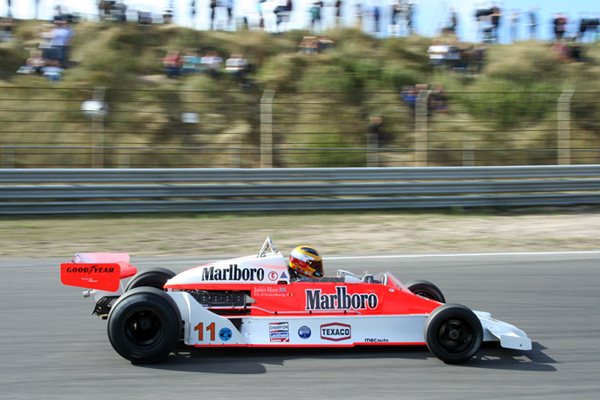 The bicycle fans could enjoy the Yamaha Classic Racing Team for the final time. A collection of restored Yamaha racing bikes. Despite not being a fan myself, the sound of the engines was breathtaking. It’s a pity a nice collection like this will be leaving Europe, although it will find good shelter at Yamaha. 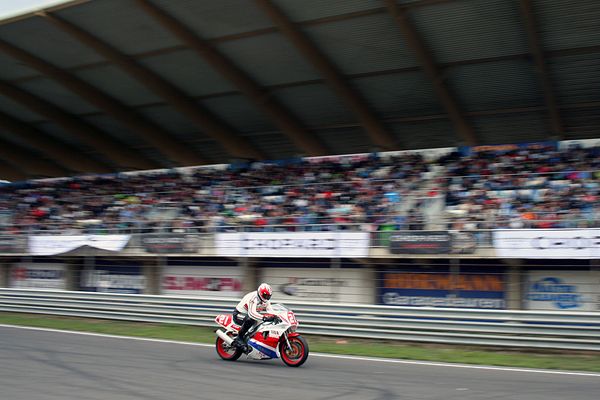 But as I said before, I was mainly there for the Sports Cars (and F1 cars) and the FIA Masters Historic Sports Car Championship brought some interesting cars to Zandvoort, including the following KMW-Porsche SP20 and Alfa Romeo Tipo 33/2. 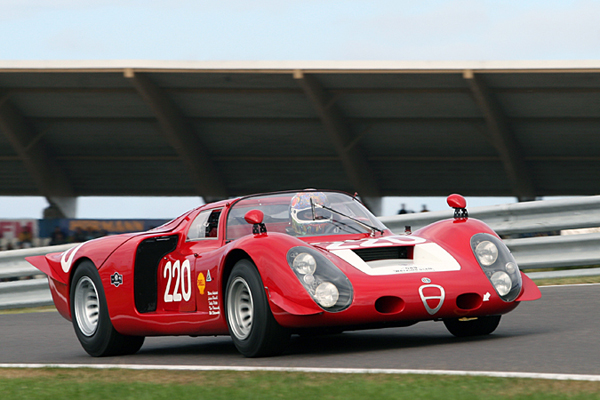 Let’s finish with the brand we’ve started with…Porsche. A large number of Porsches raced in the Historic GT and Youngtimer Trophy, including one driven by ex-F1 driver Robert Doornbos and one painted in the famous Pink Pig livery. For Bernd Langewiesche, who also raced the KMW-Porsche SP20, the car is simply nicknamed “Schweinchen”. 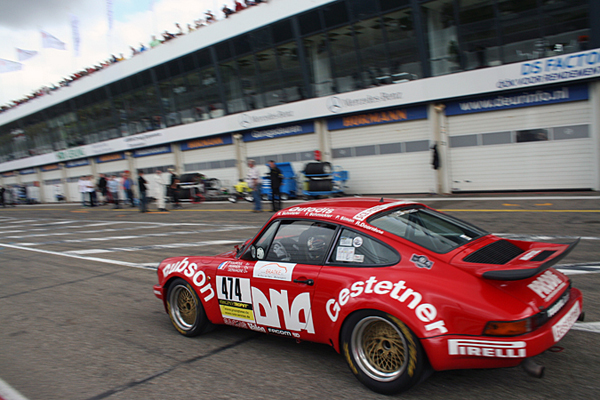 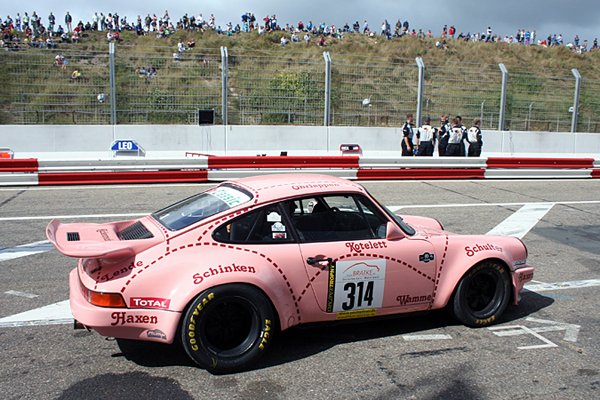 The success of the 2013 edition of the Historic Grand Prix at Zandvoort makes it quite easy for the organisers to plan another event in 2014. As I left Zandvoort there were already talks about getting Group C to join the event next year. Let’s hope that this will happen as it would give the event yet another boost!