The fifth hour began with a broken suspension dance performed by two cars from two separate incidents. One was the Morgan of Pla, which was more damaged than first thought and it dropped nearly to the back of the class. The other was the No. 97 Aston which suffered a badly damaged right front breakage.

The No. 1 Audi received a stop-and-go for short cutting, further knocking it out of the lead battle, but still ahead of the Lola-Toyota. As advertised, the overall challenge is all about Audi speed (McNish for most of the hour) versus Buemi and general Toyota tenacity. Guess which will succeed? It’s not that simple!

The GTE Am race remained steady but very close between the two Astons. The No. 95 car, Nicki Thiim and later Kristian Poulsen, held the point for nearly all of the last third of the race over No. 96, in which Jamie Campbell-Walter has run a long stint. Elsewhere, the none-too-experienced Erik Maris has done with the Art Car Oak Morgan what he did during practice—spin, and spin again. His class, LM P2, has become more steadily in the possession of G-Drive with Mike Conway driving a strong finishing stint. 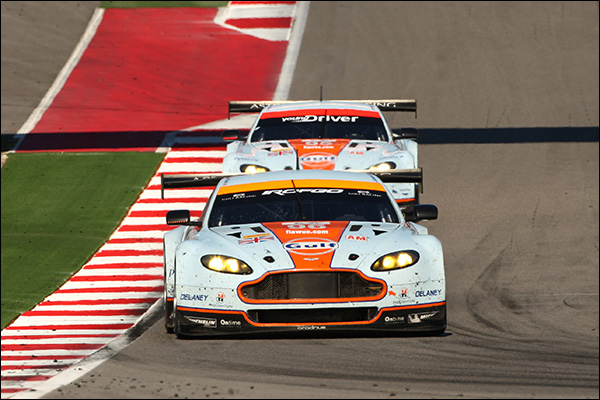 The penultimate pit stop cycle in LM P1 still did not show the final hands, but the final ones certainly did. McNish came in with about a half hour left in the race and took on only fuel, leaving the fresh tires unused on the ground. Toyota was clearly not expecting this, hoping that they retained a chance in that regard. Buemi followed into the pits a few minutes later and it was not pretty. While they too skipped taking tires, the problem was that Buemi had a bum leg and needed relief. Sarrazin stepped back in and that was pretty much the game. 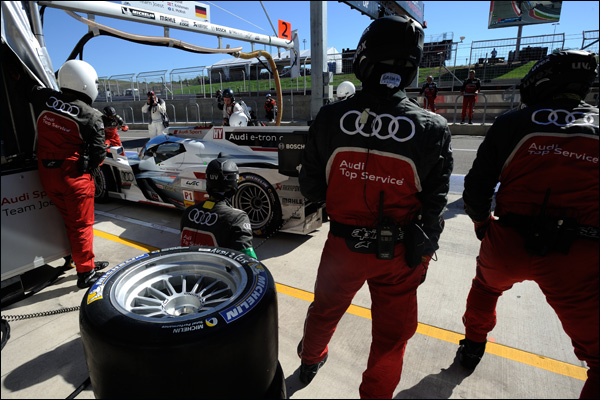 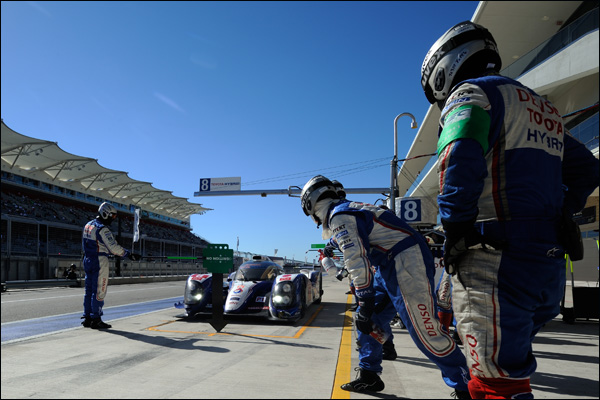 While GTE Pro is in the Aston Martin camp, it is in some respects the wrong Aston Martin as the championship leading No. 97 seems to have had permanent damage to shock mounting area in the right front. This left another Aston fight, that in GTE Am, as the best contest in the last hour of the race. Poulsen remained in front of Campbell-Walter through the last set of stops and the two continued close. Inexorably, JCW closed in and with less than 15 minutes to go made a desperate move—late braking, a quick lock up, and a startled Dane ahead of him all conspired for the two to swap spots.

Makowiecki, at the front of GTE Pro, was the last of the class leaders to make a splash. This put the chasing Ferrari of Bruni within something of striking range were something untoward to occur. It didn’t and Makowiecki (with Senna) readily won the class. McNish survived an odd late race problem when the race number fell off one side but the car was not black flagged. Thus, he, Kristensen, and Duval are poised to formally hand Audi the title. Campbell-Walter (with Stuart Hall) hung on the GTE Am prize with their late pass. The Martin / Rusinov / Conway trio have vaulted the Delta-ADR team up toward the class top with their win. 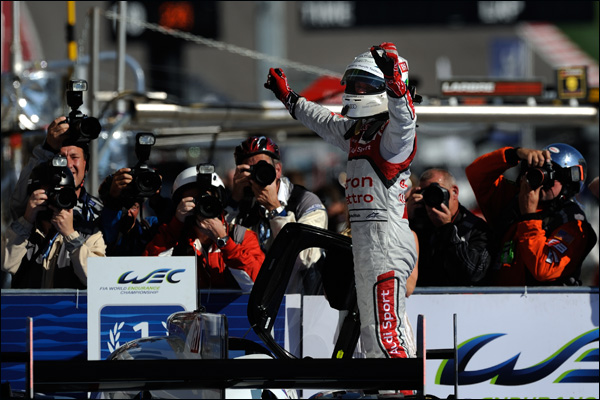 There is little doubt that the inaugural International Sports Car Weekend at the Circuit of the Americas near Austin, Texas was a resounding success. The track is great, the facilities are fine if a bit oddly designed. The people are the font of Texas hospitality. There are issues, most notably a need to actually promote the event! However, for the most part, it truly belongs on the calendar.

As for the WEC race itself, there were interesting stories and dramas in each class. While the overall results had a piece of pre-ordination about it, it truly was a good Audi-Toyota contest that wasn’t decided until the No. 2 Audi established an adequate gap and that took the hard work of the driving trio.

LM P2 had the slapstick nature of the intra-Oak fight which gave a well-deserved win to G-Drive and also allowed Lotus to take an upset podium spot. For them it was justice after a poor start. GTE Pro had bad drama for Porsche with a fire and tire problems, a persistent but ultimately unsuccessful Ferrari challenge, and a good-bad win / retirement for Aston Martin. Apart from Corvette, each of the marques represented in GTE Am played a role. Interestingly, it was broadly similar to GTE Pro with Ferraris nagging the eventual winning Aston Martins and Porsches hanging about but rather troubled.

In short, it was exactly what an endurance race should be. Leaving you with a bit of Texas cowboy wisdom, always drink upstream from the herd.