Apart from the third round, at Paul Ricard, which clashed with the British GP at Silverstone, David Addison was at every round of the 2013 Blancpain Endurance Series. Here he reflects on a successful season.

It feels wrong, somehow, sitting in September talking about the end of a season. Sadly, the Blancpain Endurance Series for 2013 has finished, and a fascinating six hours played out at the Nürburgring to decide who would take home the drivers’ and teams’ titles.

There is a part of me, not least the need to pay for more nappies, that would like more races but I understand why SRO has capped BES at five for 2013 and the foreseeable future, and if you are going to have five not six, a 1000 kilometre race was the ideal option. It may have been called the Blancpain 1000 rather than Nürburgring 1000kms, for all sorts of brand, trademark and litigious reasons, but to me it still had the grand echoes of its forbears.

With all due deference to Maxi Bühk, I can’t help feeling that it is a shame he won the crown. Don’t get me wrong, he drove superbly and never put a wheel wrong in Germany, nor at Spa where he, Bernd Schneider and Maximilian Götz also won, but in only doing three of five races, I feel a little sorry for the teams that committed to the whole season.

Allowing for the fact that HTP Motorsport did a ripper job with the car, armed with a season of testing on Pirelli in FIA GT3, a crack team in Charouz running the car and three good drivers, it was shame that the car was so dominant. That, therefore, marks out Maxime Martin for a special cheer: that 30-minute or so period during the final round in which he tried to fend off Bühk was as fine a drive as you will see in a GT car. I confess to being a fan of Martin and of the team.

Partly it is to do with the fact that I think the BMW Z4 is a superb piece of kit, partly down to team PR guru Jake Yorath’s willingness to ply one with Belgian beer at any opportunity, and partly to Martin himself. Quiet, unassuming but incredibly quick. They don’t call him The Special One for nothing. Who else can you imagine doing what he did, sponge-like soaking up that pressure for corner after corner on Sunday? Maybe a handful from the BES grid could have done it for a couple of laps, but not for as long. I keep hearing rumours that we may lose him – and Marc VDS – from Blancpain for 2013 and that would be a real shame, but that battle on Sunday is something to cherish for a long time. 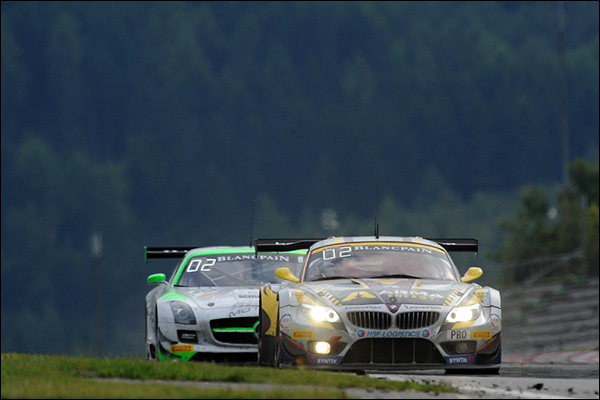 But that Bühk title was as much down to other teams’ woes as his squad’s efforts. Take Kessel Racing: winners at Monza on a day when Ferrari 458s won all three classes, but then the Italian squad seemed to go into self-destruct mode. I said in commentary at Monza that after some Fred Karno-like pit stops in 2012, the team had turned a corner in pit work. 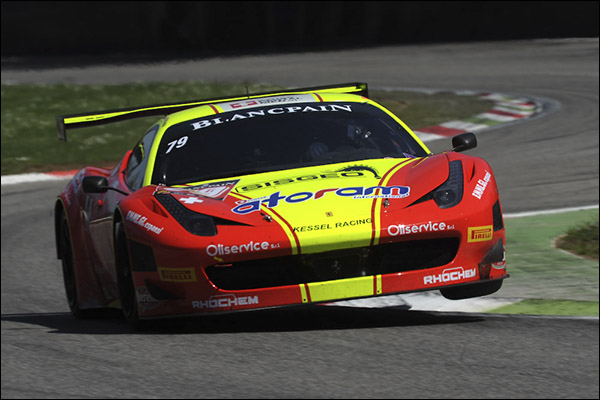 But by Paul Ricard, Kessel was in strife again. I gather that there were seven offences on one pit stop so it was case of choosing one to penalise them on, not finding one! Then came the late-race heartache at Spa when the engine broke and the Rasputin-like 458 was battered to within an inch of its life in Germany. Two crashes in free practice served notice of how the weekend would be.

Kessel will improve and it will become a major factor. These things take time, in all categories, and if the team continues to tackle Blancpain, valuable lessons will be learned.

Audi has had a poor season. Whilst Vincent Vosse is to be commended for his choice of headgear – his flat cap a nod perhaps to the venue of his first ever race at Oulton Park – his cars have failed to sparkle. Yes, I know: balance of performance restrictor break weight coathanger spoon 2012 spec unfair rules SRO….. I’ve heard it. White noise. The fact is that the cars haven’t looked on top form all season and that was a surprise. There is no shortage of talent in those WRT cars but they have struggled all season. Phoenix, likewise. If it is down to BoP, it is hard to sort out. You will always have brands moaning, others claiming of sandbagging if slow and trying to equate so many different cars is a terribly tough job. But for all that Audi has complained, and struggled this year, it seems genuine. We haven’t had an Audi BES win this year…. I didn’t think that would be the case pre-season. 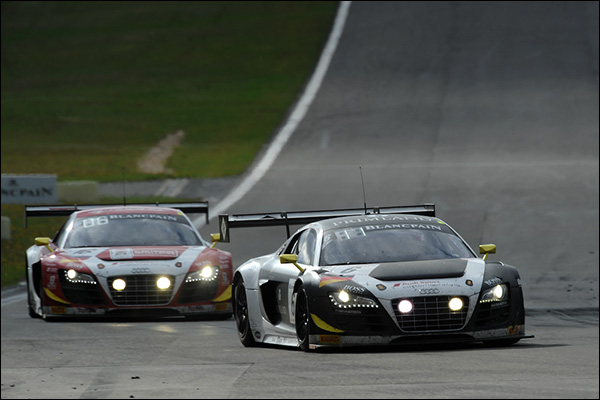 This season, we’ve had the usual monster grids to stay on top of, with plenty of new drivers and teams. Life has changed for me, too, in that I have had a partner in the box all season in John Watson. It is fair to say that John is happy to let me worry about pit stop strategies and driver histories, but his pithy remarks and fresh outlook have made for a refreshing commentary this year and we’ve had some laughs along the way. He, like me, has his favourites: he’s a Schneider fan, an Adam Carroll fan and a Porsche fan. Thus it gave no pleasure to see Adam’s McLaren on three wheels in Germany, nor the awful weekend that Prospeed and Haribo had in trying to make their 911 GT3Rs competitive.

If Porsche struggled, so too, largely did McLaren. I have written somewhere before about my surprise that the cars haven’t won more races in GT racing as a whole, not just Blancpain, but if the cars were disappointing in 2013, so as a team was Hexis. This was my tip pre-season for wins: improved car (I thought), top team, top drivers….. Oh dear. I gather that the upgrades to the MP4-12C made it significantly different from the 2012 spec and perhaps it was a step back for Hexis, but I remain surprised that the squad never nailed the car to its liking. 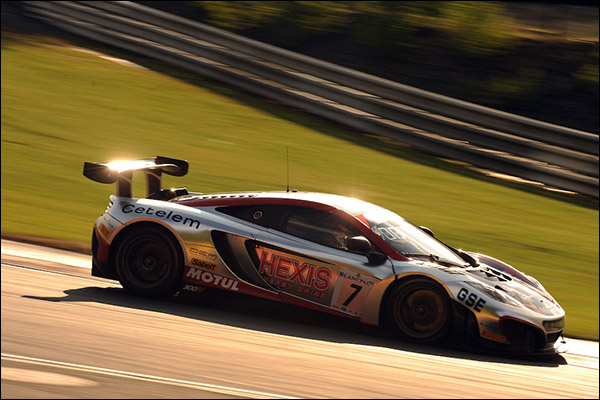 An annual feature of the Blancpain Endurance Series website is the unofficial Moonlighting Awards, my occasional column for the site. With that in mind, it is wrong on this website to give more than a taster of those commendations, but there are a few people who deserve praise for their efforts, sometimes unnoticed in the heat of a race.

Take Rob Bell in the Gulf Racing McLaren. Always a star, almost always unrewarded, save for Monza. Adam Carroll for his last corner pass of Edward Sandström after almost an hour of trying. Markus Palttala showed what he could do in the second Marc VDS BMW where he became de facto team leader, and he starred, especially at Spa and Nürburgring where he was able to show his class, not be the third driver behind Martin and Bas Leinders. Andrea Bertolini deserves credit for always making the AF Corse Ferrari fly, again Monza stands out, Nissan drivers Lucas Ordoñez and Alex Buncombe drove brilliantly all year, the Darren Turner/Stefan Mücke/Frederic Makowiecki Aston Martin performance at Silverstone was spot on, Henry Hassid/Ludovic Badey’s BMW Z4 was impressive all year only to fail at the last hurdle. The list goes on… 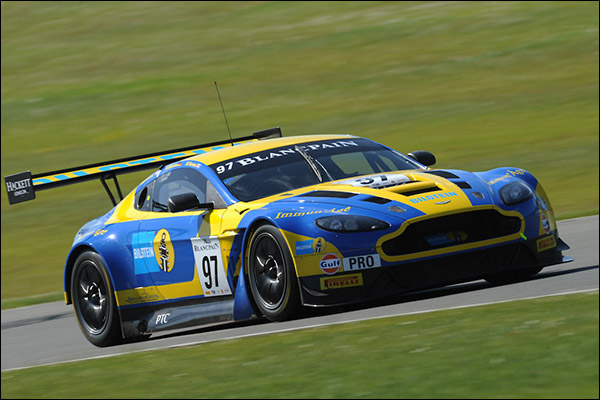 Having full grids and long races again takes me back to the early days of the BPR, series, or as it was called in 1995, Kärcher Global Endurance GT. My first exposure to that was Donington 1995. As usual, Donington’s Robert Fearnall was the first to bring something foreign and interesting to the UK and a 26-car grid did battle for four hours, with John Nielsen and Thomas Bscher the winners. Just like now, there were teams of Pros, Pro Ams and Gentlemen; just like now there were Porsches, McLarens and Ferraris. Another link is that I met new SRO recruit Lucas Bscher at the weekend: he’s planning racing soon, albeit in Formula Vee not a GT car.

We all look back misty-eyed at the early days of GT racing, at those BPR grids but they were very small compared to a Blancpain grid. Far more happens in a current three-hour race than those early four-hour thrashes, but with increased track capacity, no wonder we can enjoy bigger grids. Entries are bigger, the pit lane is fuller, but more importantly, things are more competitive than ever before. I can’t easily prove this, but whereas Audi did a pad change in 30 seconds at the weekend, we’d have been talking about losing laps back in 1995 I’m sure. Progress…. It’s irresistible. 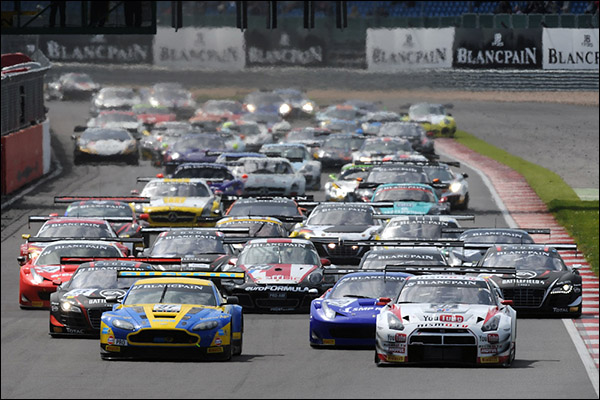 Next year’s Blancpain calendar remains much the same, five races, same venues, same format. With a number of teams having struggled in 2013, it may be that they don’t return but expect the entry to be a high-quality one again no matter. April feels a long way away….