This was the first official ‘practice’ session of the event, but there was a test session yesterday afternoon for the ALMS competitors which was well participated; Muscle Milk Racing being one of the notable few that opted out. Guy Smith, back in his familiar role in the #16 Dyson entry, was quickest in that Thursday session and somewhat surprisingly was quickest again here this morning.

Guy Smith: “We had an issue with the car yesterday and it was not that good. It’s much better this morning, although the track is still a bit slippery – dusty. We’ll watch and see what Muscle Milk does here, but it was good and I hope we can give them a run for it.” 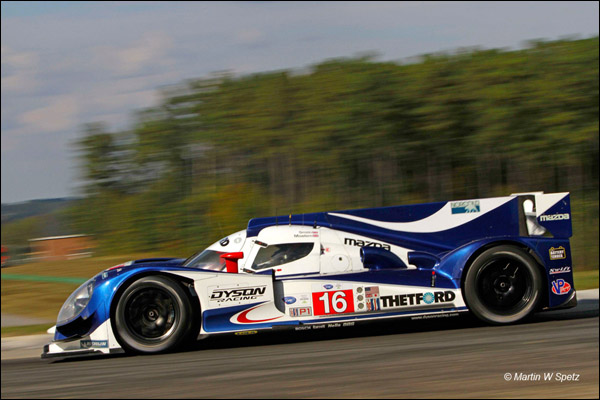 Smith’s best time, 1:37.034 on his fifth lap, was three seconds better than yesterday’s best, and a full second better than Klaus Graf posted in his HPD this morning. The return of Smith, along with the very capable Johnny Mowlem, is exactly what the P1 class needed. Barring any mechanical issues, these two in the Dyson Lola should be able to give Luhr and Graf the competition that has been sorely missed this season in P1. 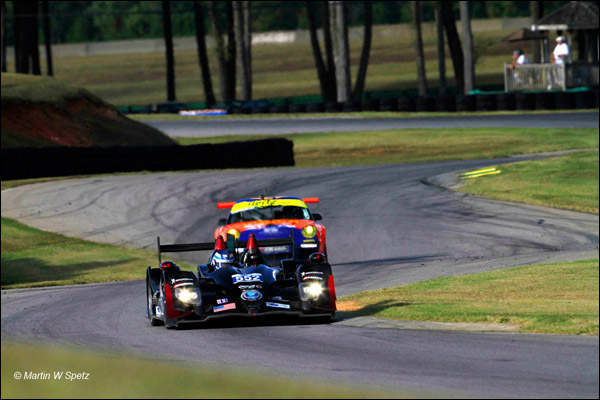 Johannes van Overbeek, in the #02 ESM Patron entry, was second best in class, and although he was over a second slower than Briscoe, he was still happy with the car and their chances. 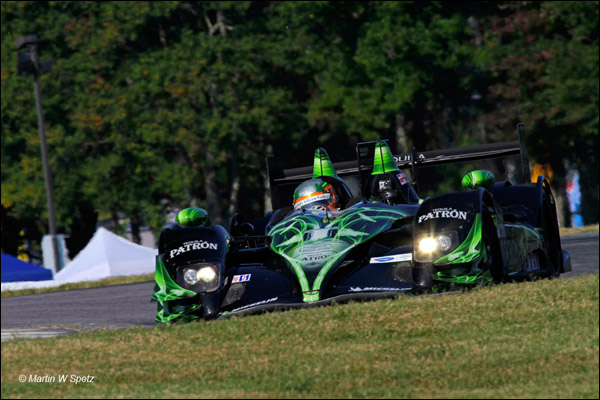 Johannes van Overbeek: “This track is the complete opposite of Austin (COTA). There is plenty of room at COTA if you make a mistake or get forced off line. As long as you don’t do anything silly you can gather it back and keep going, and that was proven true as we had no yellows at that race. Here though, one misstep and you’re in the grass, and in trouble. You have to look ahead and know your car’s strength to set up and make passes.”

Cosmo was third quickest in the ‘three’s a crowd’ Level 5 car, as he got morning duty while Franchitti watched from atop the pit box. Johansson had a spin between turns 3 & 4, but hit nothing and continued.

Thursday test results had Patrick Long in the CORE Porsche atop the GT class followed by the SRT Vipers. Long wasn’t able to repeat that feat during this session, but another factory Porsche guy did lead the class for some time. Marco Holzer, in the Paul Miller Porsche, held the quickest lap for a good portion of the session. Finally, Antonio Garcia in the #3 Corvette displaced him, but his reign was short-lived. Jonathan Bomarito, in the ‘yellow’ Viper, had his moment on top also, but it was the red Risi Ferrari of Matteo Malucelli that made it stick. All the top GT runners were flirting with times around 1:47 but only Malucelli would break that barrier with a 1:46.501. 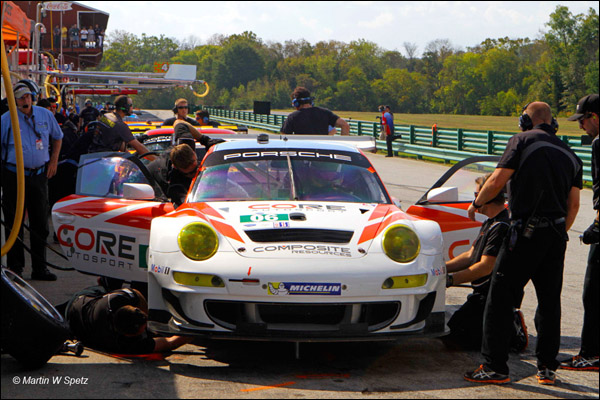 Rounding out the top three was Olly Gavin in the other Corvette and Marco Holzer in the #48 Porsche. The SRT Vipers slid back to settle for fifth and sixth.

Marc Goossens: “We are real happy with our car. It has been very strong lately, and it was pretty good right off the truck here. We are just working on set-up, trying to make little gains. This is a tough track to pass cars in the other classes. The GTC cars with a pro driver are just as fast as we are in many sections of the track. It’s narrow, tough to pass, and there is really no run-off area, but you can’t worry about that. All I’m looking at is the racing line. You can’t think about anything else.”

Falken is running, and will for the rest of this season, their ‘older’ car as their latest spec 997 GT3 RSR was too badly damaged at Baltimore to warrant a rebuild. They are hoping for the best this weekend, but realistically looking forward to next season and maybe a new 991.

PC was dominated this session by points-leader Mike Guasch and driving partner for this weekend, Dane Cameron in the PRI Mathiasen run car. The entry list has David Cheng in the car with Guasch, but it was for sure Cameron in this session as he set the fastest lap in the PC class. Tom Kimber-Smith for CORE Autosport was second, followed by Performance Tech’s Tristan Nunez.

GTC was just the way Alex Job likes it – “boring” – and the AJR car being up front in both Thursday’s test and today practice didn’t hurt. Job went on to say that there was nothing special with the car, he just had a fast driver. The veteran team boss is looking for a nice quiet race with no surprises. Jeroen Bleekemolen led the GTC class pretty much from start to finish, aside from a few jabs from Spencer Pumpelly in the Lizard car. In the end though, Bleekemolen would finish in P1 with a 1:52.507. Spencer Pumpelly would hold on to the second spot ahead of Sean Edwards in the #30 NGT MOMO entry. 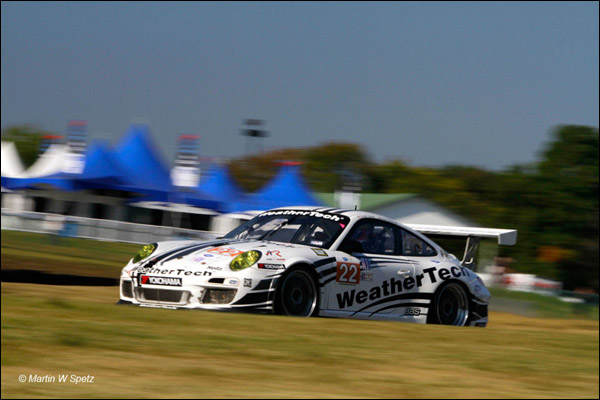 Times were generally slower across the board during the second practice session, which immediately preceded qualifying. The track temperature was up from the morning and teams saving the car for qualifying were the potential reasons for the slower times.

Dyson was a late arrival, with Mowlem getting their first lap 20 minutes into the session. Smith would eventually take over to post Dyson’s fastest lap of the session, bettering Lucas Luhr’s lap by half a second. Graf then showed his muscle by sneaking past Smith with just a minute left on the clock.

Dane Cameron continued to prove why he was a good choice to team with Guasch this weekend, lead the PC class all session and being quicker than all the P2 cars for most of it.

The P2 class finally got their feet under them and Briscoe led the way followed by Franchitti and then van Overbeek.

The Falken Tire Porsche suffered a left rear suspension failure, causing them to crab-walk it back to the pits, but GT was a BMW vs Porsche battle, with Holzer topping Dirk Müller and Maxime Martin. Long was quickest for a stretch but settled for fourth at the end.

Pumpelly was quickest in the GTC class aboard the #45 Flying Lizard Porsche.

It was an all-green flag session, as was first practice, but there were quite few more incidents as everyone was getting a little more aggressive. Performance Tech, #8 BAR1 and DragonSpeed, all PC class, each had a run through the green grass of VIR. Both Kyle Marcelli in BAR 1 and Renger van de Zande in the DragonSpeed touched the tires but sustained little damage. Franchitti also did a little lawn mowing, but drove away with no apparent damage. Bleekemolen and Ed Brown were aiming for the same apex and contact was made. Bleekemolen backed out and went wide kicking up some dust, but both continued, although Brown was penalized for the contact. Holzer went way wide through turn #16 and found himself surrounded by green. He had to pit to remove the now-smoking vegetation from the under-tray. Next up for the grassy slide was our most famous racer Patrick Dempsey, who lost it under braking and went for a tail first skid toward the tire wall. The last few minutes saw the ‘blue’ Viper and one of the MOMO Porsche’s skidding off track into the grass. Expect to see a lot more of this come Saturday afternoon.