Porsche Motorsport North America will get a significant sales boost this off-season as we will see new cars in almost every professional series. Both GT classes, GT Le Mans and GT Daytona, of the Tudor United Sportscar Championship will get completely new cars. The current ALMS 911 GT3 RSR will still be eligible for the GT-LM class, but unlikely to be run by anyone. It was announced earlier that Jon Bennett’s Core Autosport will be the factory run team in the GT-LM class. This will be a full factory supported effort, labelled Porsche North America and filled with Porsche provided personnel and drivers, similar to Manthey in Europe. 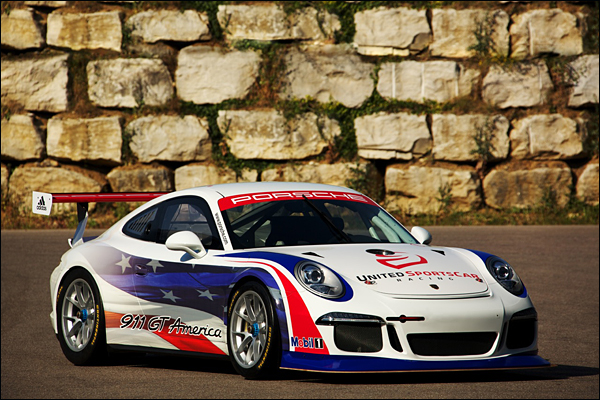 Jon Bennett; “Our role will be to manage the car and the team throughout the race season. Porsche is deep in engineering and manufacturing talent. They don’t need our help in those areas. We will be responsible to prep the car and crew so that they are ready to perform on the race weekend. We haven’t discussed the drivers at length yet, but I believe they are open to the possibility of a driver outside of their system. That’s what we are doing with Colin Braun right now. Just a test to see if he likes the car, and the car likes him.” CORE will also continue next year with the PC program in which Bennett will drive. It’s likely these two programs will appear separate in the paddock; separate trailers, liveries and pit stalls to keep the autonomous identity that Porsche desires for their 911 program. CORE doesn’t expect delivery of the cars until after the WEC round in Bahrain.

The original plan was not to provide any customer 991’s for North America in 2014, but to concentrate on the factory effort to get the car sorted properly for customers in 2015. But now it sounds as if Porsche is softening its stance on that and it’s understood that Derrick Walker and his Team Falken Tire would be the logical benefactor.

The return of a factory-backed effort from Porsche to the North American sportscar scene is something to celebrate, but its return is not without some casualties. If CORE get the full factory support, where does that leave teams like Paul Miller Racing? “It definitely puts us between a rock and a hard place,” states Bryce Miller. “We’ve been loyal Porsche racing customers for long time, but how can we compete with that? So, we really don’t know what our plan is for next year. We’ve looked into GTD, and other manufacturers for GTLM – even the Bentley program – but our race team has been identified with Porsche for so long now.”

The current Porsche GT3 competing in Grand-Am is a modified Porsche Cup car. These cars, as with the current ALMS GTC Porsches, the 911 GT3 Cup, will not be eligible for the new GT-D class in the TUSCC without modification, and the modifications required are apparently so cost prohibitive that Porsche has nixed that avenue. Instead the factory has commissioned the build of a brand new 991, the GT America, specifically for the GT-D class. This car, although completely new, is loosely based on the current FIA run GT3 R, which this year replaced the GT3 Cup S. The 911 GT America will feature a Porsche flat-six 4.0 liter racing engine which will produce 470 hp. It will also get some new aero bits and a TUSCC-spec rear wing. Porsche will build 15 of the GT Americas and hope to have at least some of them ready for the ‘unconfirmed’ official test at Sebring in November. Porsche is more than confident they will sell all 15 of the GT-D class contender.

One of the potential customers for the new GT America is Alex Job Racing. Alex Job added these comments; “We are definitely looking at it. How it will compare to the other GT3 cars eligible to run in the class I’m not sure yet; but I do like it. It’s the correct car for the class. Porsche has done a nice job performance-wise and with the pricing structure. It’s very possible we will become a customer.” The GT America has a base price of $269,000, plus shipping and parts package. 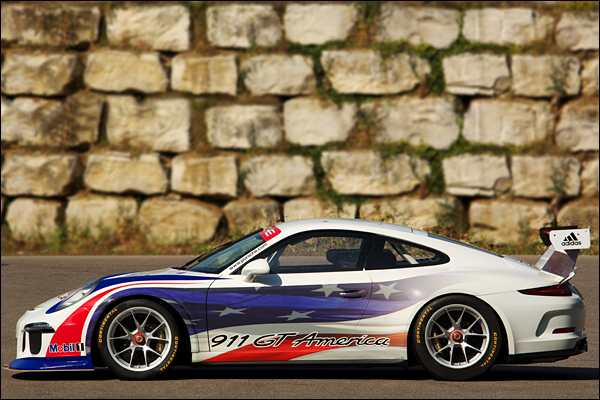 The IMSA GT3 Cup Challenge will continue on with the TUSCC as a single make support series, just as it is currently with the ALMS. This series has two classes of the 911 GT3 Cup car: Platinum represents model years 2010-2013, while the Gold supports model years 2005 through 2009. The new 991 based race car will fill the Platinum class in 2014. The current Platinum class cars will be moved down into the Gold class and current Gold class car will no longer eligible.

Porsche also has the Pirelli World Challenge series to worry about, and it’s likely they will get a new 991 GT of some sort, but that has yet to be finalized.

Sadly though, all of us Cayman fans will be left without again. There will be no factory support, or plans for future support, for the Porsche Cayman as a race car. Well, at least we won our class at Daytona the first time out; they can’t take that from us!

It’s been a ‘down’ year by Porsche standards for the venerable 911 GT here in North America. There will be no driver, team, or manufacturer championships this year, and the lone win came late in the year at the Grand-Am Laguna Seca round. Porsche still has one race left in the ALMS, the finale Petit Le Mans. It would be a pleasant surprise to see the 997-based GT3 RSR finish its outstanding career on a high note, however unlikely. Historically, Porsche’s ‘down’ trends have never lasted for long, and when they come back it’s usually with vengeance, followed by a bunch of wins. Look out 2014.

(On a side note, although it has yet to be officially accepted by the Guinness Book of World Records, we believe that Porsche has set a world record for the number of acronyms associated with a single make of car.)