The 2014 specification Porsche 911 RSR is set to debut at the 2013 FIA WEC finale at Bahrain if things go to plan.

Porsche must race the car during this season if it is to be homologated for the 2014 season and 911 RSR Product Manager Marco Ujhasi confirmed that, subject to the required parts being available, both factory cars in Bahrain will be to 2014 specification.

Ujhasi though was tight lipped on specifics, we do know though that the changes are anything but dramatic:

“Unless you know the current car very well it would be difficult to spot the differences very quickly!” 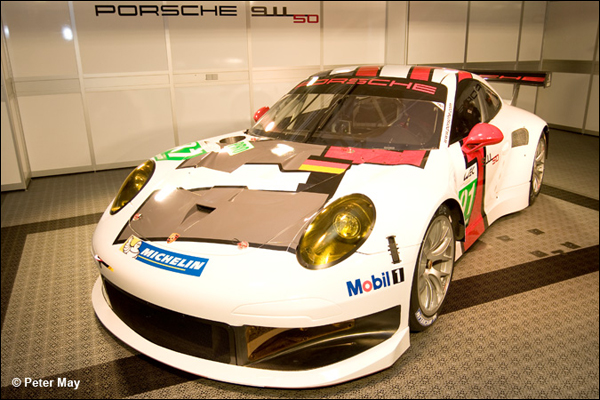 The package of updates is believed to be fairly wide ranging but relatively minor in nature.

Despite theories to the contrary the car will continue to be based on the current body shell “the GT3 body and systems (unavailable for homologation initially) offer no real advantage over our current car.”

“We are addressing areas where we know the car can be improved,” said Marc Lieb later. “As with any car you learn as the season develops and we have a package of changes to address those area that need to be, and can be, improved.”

With a full season of factory GT racing due in TUSCC in 2014, and the potential still for an announcement of a 2014 WEC programme alongside the LMP1 effort the evolution will have been very carefully considered.

We’ll have a brief catch-up with Marc Lieb on his forthcoming test in the Porsche LMP1 on DSC next week.