There were mixed signals at the start of the Petit Le Mans. Indeed, mixed signals have become something of a theme for the weekend. There have been celebrations about the end of ALMS, largely overshadowed by laments for its passing and trepidation about the future. The ambivalence of the weather conditions added to this. The green flag waved on a damp but rapidly drying track, yet with dark clouds on the horizon. 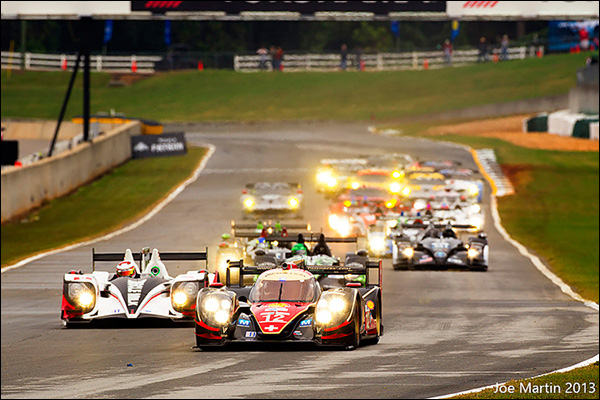 There were nevertheless good fights for the lead in several classes. Neel Jani at first pulled away into the overall lead with the No. 12 Rebellion Lola-Toyota but within five laps Lucas Luhr set fast lap with the No. 6 Muscle Milk HPD. Luhr soon stopped as did Jani, leaving Oswaldo Negri as the overall and PC class leader in the No. 25 Eight Star entry.

There was some drama in GT. First Dominik Farnbacher bolted into the class lead with the No. 91 SRT Viper past teammate Tommy Kendall. Matteo Malucelli dropped back to third with the No. 62 Risi Ferrari and was soon in the clutches of Jan Magnussen (No. 3 Corvette) and John Edwards (No. 56 BMW). The Ferrari was tapped in the rear, dislodging the bumper. Malucelli continued, albeit a bit shaky.

Jonathan Bennett’s No. 05 Core Oreca was tapped into a spin by another PC class car, the No. 9 RSR entry of Bruno Junqueira. The latter was called in for a penalty as were the No. 552 Level 5 HPD (Guy Cosmo) and Seth Neiman (No. 44 Lizard Porsche). The P2 and GTC car committed pit lane violations during the first stops.

In the post stops resettling Jani retook the overall lead with Luhr tucked behind. Katherine Legge was at first swallowed up by the faster PC and GT cars, but the Delta Wing rose as high as third overall during the pit stop flurry.

One of the better starts was made by Kyle Marcelli, who wasn’t even supposed to start in the No. 8 PC Oreca. Within 10 minutes he was challenging for the class lead and after hounding the No. 25 Eight Star entry he harrassed Negri into just enough of a bauble to take the class lead and third overall, just clear of LM P2 leader Cosmo.

There were reports that the No. 4 Corvette may need to change its alternator and there were also reports of approaching rain. Marcelli was among the first to make a scheduled stop, handing over to Gustavo Menezes, and relinquishing the class lead.Indeed, Magnussen made a long stop handing over to Antonio Garcia while the electrical switch was made.

All of the other initial stops were fairly routine, bar the PC title leading PR1 entry of Dane Cameron (No. 52), which went behind the wall with some body damage and the No. 91 Viper which was slightly delayed with a puncture. But then came more drama as the Rebellion Lola, the bumper or No. 52, came in for repairs and a 60 second hold a lap later for the avoidable contact. Thus as the second hour started, the No. 6 HPD muscled into a comfortable lead.

The GTC cars remained on track with Nelson Canache (No. 45 Lizard) in the lead of the all-Porsche class. Among the early driver changes were the following: Anthony Lazzaro (No. 01 ESM HPD), Ed Brown (the other ESM entry), Tom Kimber-Smith (No. 05 Core Oreca), Sean Rayhall (No. 25 8 Star), Jonathan Bomarito (No. 93 Viper), Tommy Milner (No. 4 Corvette), and Bill Sweedler (No. 23 AJR Ferrari).