While the overall lead is settled, barring something strange, the classes are anything but. The first drama was in PC, where Kyle Marcelli’s long pursuit of Oswaldo Negri paid off. The #8 BAR1 Oreca took over the lead with about 85 laps left in the race. The expectation is that the race will last about 9:10 hours.

Next came GT, where the class leading Ferrari of Olivier Beretta spun. This allowed several in the closely spaced class ahead. Wolf Henzler put the Falken tire Porsche back on top, followed by the BMW pairing of Jörg Müller and John Edwards. The Risi Ferrari (Malucelli taking over) dropped a lap behind the leaders with Long (#06 Core Porsche), Bomarito (#93 Viper), and Farnbacher (#91 Viper) all another lap down.

Darkness under largely clear skies brought with it another full-course caution. This time Charlie Putman punted the Dempsey Porsche into the wall. Damage was moderate, consisting mostly of a bent wing. On the opening of the pits all three of the GTC leaders stopped simultaneously as did the BMWs, which had recently bumped ahead of the Porsche in GT. 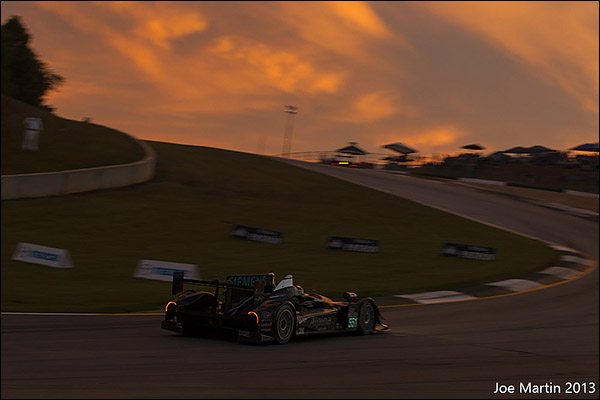 The LM P2 championship situation was seemingly decided when the #552 Level 5 entry (Jonny Kane) remained out on course and took over the lead while the other two combatants pit. This left the #01 HPD (David Brabham) in second and the championship leading # 551 (Marino Franchitti) in third. Once Kane stops it will drop to third and thus allow its teammate to take second and the title. However, the two teams maintained a fierce scrum for the race win itself with Brabham fighting past Franchitti soon after the restart.

A quick stop propelled the Cyclops-lit (do they need two headlights?) Falken Porsche back into the GT class lead on the restart. Tandy gave it a quick 4-5 second lead over the BMW pair, D. Müller (#56) just ahead of Maxime Martin in #55. The hour ended with this situation—a long somewhat somnolent race taking a nocturnal turn towards excitement.