Maranello Motorsport have confirmed Mika Salo will race for the team as their fourth driver in an all-star lineup for the 2014 Liqui-Moly Bathurst 12 Hour enduro event. 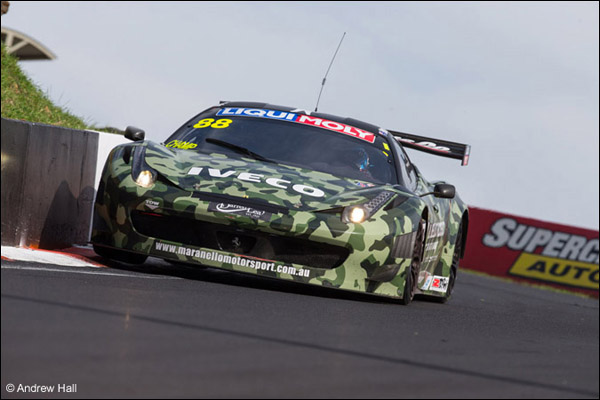 An integral part of the team’s 2013 Bathurst campaign, Salo is looking forward to getting behind the wheel of the newly constructed Maranello Motorsport Ferrari 458 to do it all again.

“It’s terrific to come back to Bathurst and work with one of the most professional teams I’ve worked with in my career.”

Having competed against Salo before in both GT and V8 Supercar Championships, Craig Lowndes couldn’t be happier with the choice of co-driver.

“It’s fantastic news that Mika is joining us in the Ferrari for the Bathurst 12 Hour next year.”

“He did a brilliant job there this year, which was his first time at the track, and there’s few drivers in the world of racing as experienced as he is … he was also a Ferrari Formula One team driver not that long ago, don’t forget, so he’s a pretty handy steerer.”

“It’s great to have Mika on the team again. His extraordinary driving skills and professional racing experience are second to none”.

Salo will be racing at Bathurst next year in champion driver Allan Simonsen’s honour; the Fin and the Dane having been long time friends and co-drivers of the Maranello Motorsport Ferrari 458 at this year’s event.