The Australian GT Championship presented by Pirelli raced outside Australia for the first time as they took to the cutting edge New Zealand Highlands Park.

The track, with a beautiful backdrop of the Southern Lakes District deep in New Zealand’s south island is an initiative of Tony Quinn – the same man that owns the Australian GT Championship. The track sets a high water mark for New Zealand motorsport with facilities that includes the ability to fully electronically control the track from the control tower.

The Australian GT drivers would race two 40 minute races to complete their 2013 season.

Coming into the event, Klark Quinn had all but wrapt up his second consecutive Championship but there were still other titles on the line and a lot of pride at stake.

Many top level drivers would join the Australian GT regulars to sample the track. V8 drivers Fabian Coulthard, Greg Murphy and Dean Canto would join former Ferrari F1 pilot Ivan Capelli in the fight for victory. Additionally many drivers would take on new codrivers for the event.

Klark Quinn would be joined by 2013 and five time Carrera Cup Champion, Craig Baird who would take pole in the VIP Petfoods Porsche GT3-R. Baird set a time of 1:34.214 – which was seven seconds quicker than when a GT car did demonstration laps at the launch of the track. 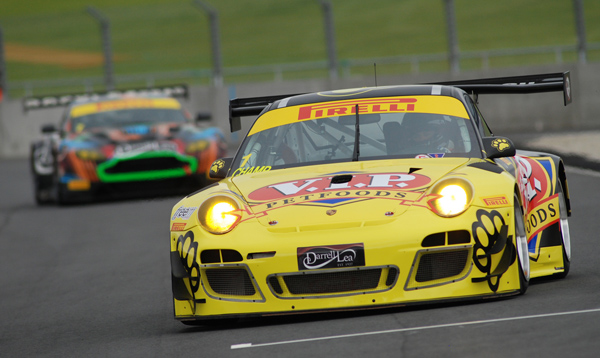 He would beat out Coulthard, who was driving with Tony Quinn (Aston Martin Vantage GT3) and John Bowe’s Ferrari 458 GT3.

Coulthard, while satisfied thought the qualifying run could put his race strategy at risk.

We probably did more laps than either one of us wanted to,” Coulthard admitted, “and in the end I basically ran out of fuel, so that was that. It was a good lap by Craig, we’ll just try and return the favour in the race.”

The first 40 minute race would take place later the same day and would take in a compulsory pitstop, which would be timed – with higher graded drivers getting longer pitstops.

Brendon Cook would be the first casualty as he clipped the wall on the final corner in his Porsche Cup Car.

When the pitstop window opened, Baird was the first of the front runners to get the stop out of the way, giving the wheel to Klark Quinn. While he had a 18 second lead over Coulthard, he would have a 86 second pitstop, some 26 seconds longer than the Liam Talbot/ Rod Salmon Audi.

The pitstops would prove crucial. After Liam Talbolt handed over to Salmon, Klark Quinn would have a narrow lead over the Audi.

There were some issues for other racers including a spectacular, if harmless fire for Michael Hovey’s Ginetta (he was able to race the car the next day).

Through this first race, both Klark Quinn and Tony Quinn who took the wheel from Coulthard would run into tyre issues dropping significant time and leaving Salmon to take his first win of the year. 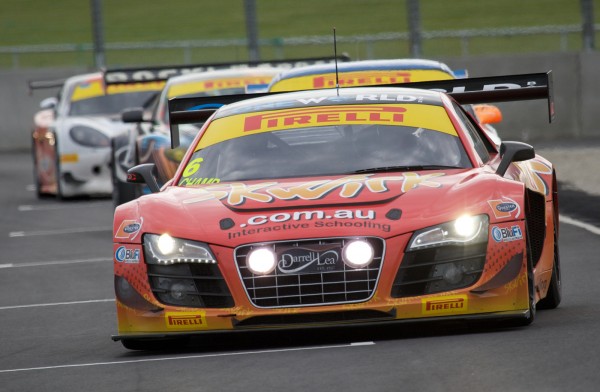 “That’s fantastic,” Rod Salmon beamed afterwards. “That has to be one of the best wins of my career.” 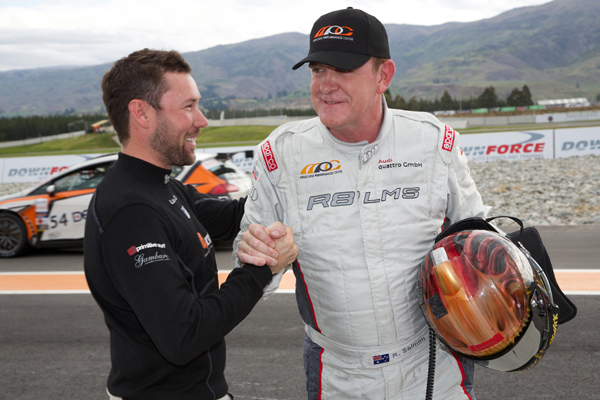 For team-mate Liam Talbot, he admitted that the enormity of the result still hadn’t hit him.

“I had no trouble sticking with the Aston, the Ferrari and the McLaren off the start, in fact they were holding me up,” he admitted. “I didn’t realise until after I got out of the car that it was Greg Murphy in front of me, and he was really starting to struggle as the laps wore on. There were a few times that I had the chance to put my nose down the inside, but there’s still a long way to go this weekend and I didn’t want to risk anything.

“As it was we were right where we needed to be in the end, and Rod drove brilliantly, I still can’t believe it..!”

Salmon and Talbot would take race one from Tony Quinn/Coulthard and Greg Murphy/Neil Crompton’s McLaren. Klark Quinn and Craig Baird would come home in fourth.

The second race would take place a day later, and like the first race, the weather would be fine. It would also be a 40 minute affair with compulsary pitstops, with the grid based on the results of the previous race. 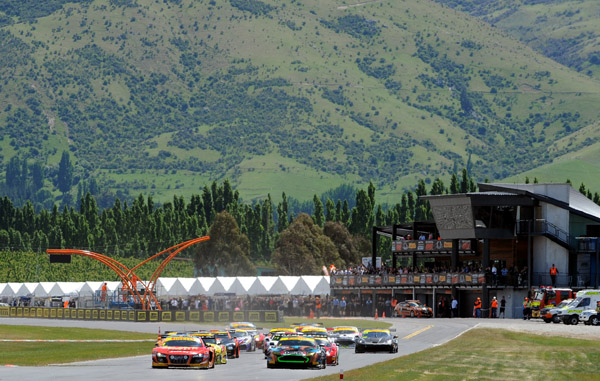 Fabian Coulthard would start from second spot and would use his front row start to shoot into the lead and streak away from the field – 28 seconds by the time his pitstop would come around, longer than needed to overcome the delay due to his driver seeding.

Klark Quinn had started the Porsche which had one effect – that Craig Baird would be taking the car for the finish but try as he might, he could not catch the leader – Tony Quinn who had taken over from Coulthard – and would have to settle for second.

Third in the race was the Audi of Salmon and Talbot, backing up their race win from the day before.

With a win for Tony Quinn, he would be able to cement his name in the history books at his own track in his own series. Surely a unique accomplishment and a fairytale weekend. 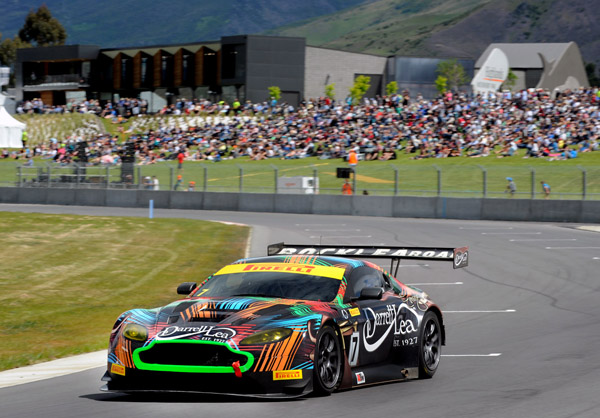 “That was brilliant,” a jubilant Tony Quinn admitted afterwards. “Fabian drove a fantastic opening stint to give me a buffer over Bairdo. I could see him coming but had plenty in reserve.”

“I threw everything I had at it,” Baird admitted. “Klark drove a brilliant first stint, but Fabian was just too quick. The traffic wasn’t too bad, we just couldn’t catch them in the end.”

The Australian GT Championship presented by Pirelli now enters the off season but the 2014 Championship has been announced with six rounds with two events having a unique 101 lap race. The Championship will partner the Shannons Nationals and V8 Supercar weekends. The calendar is as follows:

The Australian GT paddock was plunged into mourning, however with news that former GT Category owner, Terry Little, passing away suddenly aged 62. Little together with Rachael Wagg and Martin Wagg started the series in 2005 and built it over time before selling to Tony Quinn in 2011. Little lived and breathed motorsport, playing a part in the careers of many drivers including V8 Champion, Jamie Whincup. Little leaves behind wife Carol, children Jake, Taylor and Shannon and his mother Marie.

All at Dailysportscar would like to pass on its condolences to Little’s family and friends at this time.