The DSC Ed has been dipping into the archives of late and in the coming days and weeks you’ll find some of the lost treasures that have been salvaged. This piece comes from early 2001 and predates the current DSC – It seems particularly appropriate as we approach the end of our second season with Nissan backing for our global coverage!

Anybody who has visited the Le Mans 24 Hour race in recent years will be familiar with the fervent Japanese followers of Nissan (in particular), Toyota and Mazda with their front running (and in the case of Mazda, race-winning) Group C and GT1 cars. The race has long been held a huge appeal for Japanese fans but what was the first Japanese car to score a classified finish?

The answer is perhaps a surprising one. In both 1973 and 1974, Sigma Automotive Co Ltd (Toyota) had participated, returning again in 1975. Even before that, Mazda had supplied (unsuccessfully!), engines to some participants, including Chevron. The Sigma entry did not finish in 1973, nor 1975 and in 1974 did not classify, after failing to cover the minimum distance.

The honour of being the first Japanese car to finish the race therefore fell the Datsun 240Z entered in 1975. Although the car was plagued with differential problems throughout the race, (often a weak point on the early Z competition cars), it successfully completed the event, ending up placed 26th overall and 11th in the GTS category. The Z-car returned the following year (this time a 260Z) but the team’s 1976 campaign was to end far less happily. 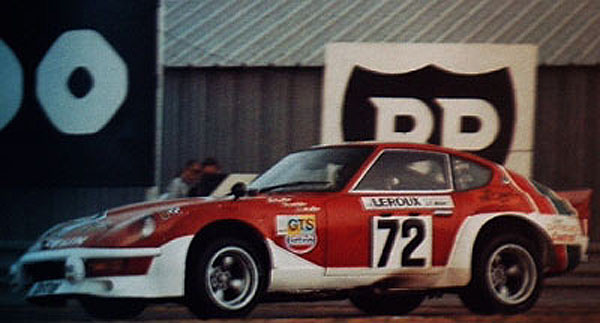 Schuller’s rallying credentials are perhaps particularly appropriate as the 1975 machine was allegedly originally a works rally car – the same vehicle (or at least a vehicle with the same registration plates) entered in the 1974 UK RAC Rally, driven by Cahal Curley.

While the Z and its drivers had some success at the 1975 race, the return visit for Andre Haller in 1976 was to end in tragedy when Haller, a young restaurant owner from Strasbourg, crashed fatally 7 hours into the race on the Hunaudieres. 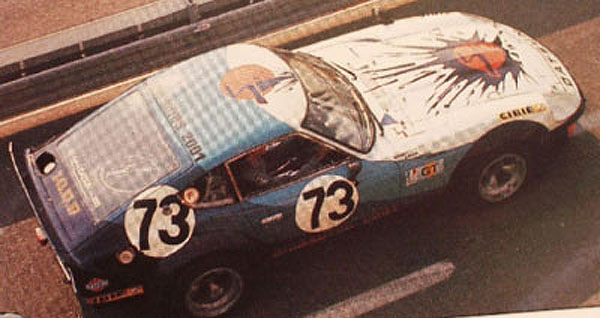 Interestingly, for both 1975 and 1976 entrants there is some confusion over whether the cars were the 240Z or 260Z model.

The 240Z was the initial version with a 2.4 litre engine (a strong and unburstable straight six with roots back to a Mercedes unit), with the 260Z following it with an enlarged 2.6 litre unit, introduced to combat the ever tightening American anti-smog laws.

Some say that the 1975 car was a 260Z with a replacement 240Z shell, however both the listed engine size and outward appearance would suggest it was a 240Z through and through.

The UK Z Club have suggested the car was actually a 260Z with a Z432 body shell on it (this was the reference given to the Japanese market 240Z), but the jury is still out!

A less common feature of the 1975 car, which does not appear on the 1976 entry, is the “G” nose, a fibreglass nose extension originally limited to the Japanese market, which when combined with Perspex headlight covers and chin spoiler was meant to improve the car’s aerodynamics.

Since its introduction, the Z series has had an illustrious motor racing career, particularly in America, the country where Nissan sold by far the greatest numbers. Over the years it has competed in and won many series, primarily on the track, but also as a Nissan Motors works rally car.

Even today the marque still enjoys considerable success in historic racing and rallying and has many followers around the globe but perhaps none are more significant than its record of being the first Japanese car to make the flag of the toughest road race in the world.

Postscript – In the course of researching this article, Chris asked members of our forum for any available pictures of the 1975 car as he intends to create a replica of the car for historic competition. Incredibly not only did Chris manage to source photographs but he also managed (within 4 hours!) to track down the original car too – it currently resides in the workshop of the Nissan dealer in Poitiers. Sports/GT racing is indeed a global family!