Porsche locked out the front row in GTE Pro for tomorrow’s Six Hours of Bahrain with an assured performance from its quartet of works drivers in qualifying on Friday afternoon. 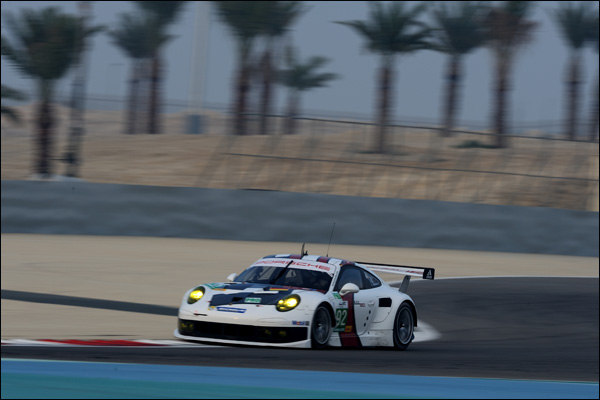 Bruno Senna (#99 Aston Martin) and Patrick Pilet (#91 Porsche) set the tone early in the session by both recording 1:58.8-second laps, but title contender Richard Lietz in the #92 Porsche lowered the benchmark further, blending speed and consistency with a pair of 1:58 dead laps. And despite an intermittent gearbox problem for co-driver Lieb, his pair of 1:59s was enough to keep the car on the top spot.

Afterwards, Lietz said he expected the result to be closer. “It’s great to get pole first time out in the new car and I hope we can translate this into a good race result. We struggled with the tyres over a full stint in the previous version, but this feels like a step in the right direction.” Lieb added: “I got stuck in third gear when I went out first, then when I went for the pit lane it suddenly started working again. That left me in the wrong position in traffic to get a clear run, so I had to push harder than intended on my out lap.”

A 1:58.3 and 1:58.5 from Gianmaria Bruni were enough to put the #51 Ferrari provisionally third fastest, while Richie Stanaway stepped into the #99 Aston and for a while took the fight to Porsche. That car would wind up fifth-fastest at the end of the session, however.

Jorg Bergmeister built on Pilet’s efforts in the #91 to record an overall average for the car of 1:58.960, displacing the #97 Aston Martin, which was driven first in this session by Stefan Mucke. Second driver Darren Turner gave it his all to try and unseat the Porsches, but ended up two tenths off the #92 car’s average. His efforts did demote the Bruni/Vilander Ferrari to fourth, however, which could prove vital to the outcome of the championship with so few points between them.

“That wasn’t the most straightforward qualifying session,” noted Turner. “My first lap was a banker, on my second I backed off in traffic, but on my third I was badly blocked by one of the GTE Am Porsches – it was one of the worst pieces of driving I’ve seen all year. So I ended up doing four laps instead of the planned two and the tyres weren’t where I needed them to be by the end. Porsche have obviously made a big step, so I think it’ll be a case of keeping one eye on the Ferraris as we try to go for the title tomorrow.”

Vilander complained of tyre degradation in the #51 Ferrari, but overall felt the 458 ended up where he and Bruni expected it to. “Gimmi [Bruni] did two excellent laps and I was about where we predicted,” he said. “Obviously I’ll be pushing hard to help him win the title and Ferrari take the manufacturer’s championship tomorrow, but it will be really tough – we’re on the limit with driving and setup – it’s been really difficult this year.”

Kobayashi and Fisichella in the other Ferrari again struggled for pace in this session, the Italian not even managing a sub-two-minute lap during his time in the car. They’ll line up sixth tomorrow.

Aston Martin’s Nicki Thiim became the first driver in this class to go below two minutes this weekend. His two laps, and two more reserved efforts from Christoffer Nygaard, were enough to put the #95 machine on pole for tomorrow’s race with an average of 2:00.303. “We didn’t expect pole, we thought the Porsches would be stronger,” said Thiim afterwards, “but we found a good setup and hopefully will have good race pace, too. Nygaard confirmed that the duo would be doing all they could to help the pilots of the #96 car take the GTE Am drivers title and Aston Martin lift the GTE Manufacturers World Cup. 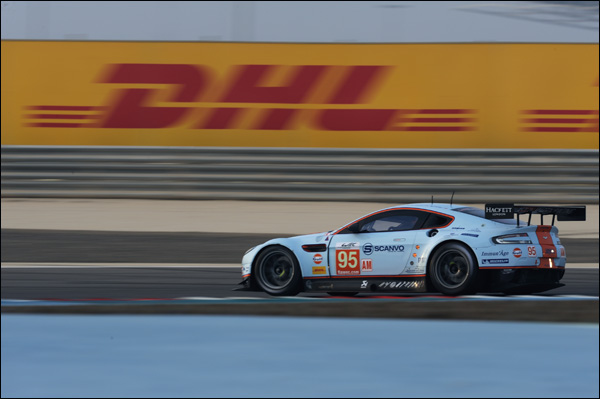 Davide Rigon pushed hard towards the end of the session in the 8Star Ferrari to match the Danish Aston Martin duo’s time, but in the end the combined efforts of him and Rui Aguas fell three hundreths of a second short. Third in GTE Am was the #96 Rofgo Aston Martin. Car owner Roald Goethe is back driving again at this round, having skipped everything else since Le Mans. Pros Stuart Hall and Jamie Campbell-Walter handled qualifying duties, however, giving the car a four-lap average of 2:08.468.

The #61 AF Corse Ferrari, #76 Imsa Matmut Porsche and #88 Proton Competition Porsche will line up fourth, fifth and sixth in class respectively – ahead of the Krohn Racing Ferrari in seventh – but there were problems for the #50 Larbre Corvette, which pitted after just a single lap with Patrick Bornhauser at the wheel and did not return to the track during the session, a minor gearbox actuator glitch the issue here.