So watch for the #2 car – all three divers need to complete 45 minutes to confirm, individually their World Championship. Watch too for a conservative run from the LMP2 Championship leading #35 Morgan Nissan.

GTE Pro is very, very close with Championship leaders AMR looking to secure a World Championship win in their centenary year after a year of soaring highs and some awful lows.

AMR are in the lead of GTE AM too, but nothing is decided there either yet with fully seven titles still up for grabs.

It’s a neat and tidy start at the  but there was contact in the LMP2 ranks at Turn 2, the #24 needs the win and Pla is alongside Pecom and there’s contact which also involves the #31 Lotus and #35 Oak, both off the circuit, the Morgan rejoins but the Lotus is in the gravel. 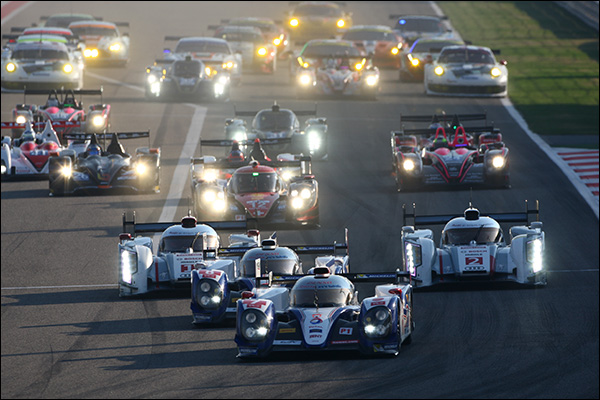 That gives John Martin the class lead from Bjorn Wirdheim and Robbie Kerr – #35 runs seventh in class at present.

Richard Lietz meanwhile is jumped at the start but recovers to third in class, Bruni holds second with Mucke right with Lietz.

Vernay meanwhile has taken the lead in GTE Am, the #76 Porsche the only car in the class starting on the harder compound Michelins.

Lapierre is getting away at the front, 1.9 secs ahead after 3 laps with the second placed Toyota further 1.5 seconds ahead of Kristensen in the #2 Audi, Treluyer a further 2 seconds back in #1.

John Martin is pulling away from Wirdheim’s Greaves Zytek too.

0:11 Dominik Kraihamer loops the #32 Lotus and hits the left rear corner of the title contending #92 Porsche of Richard Lietz – Lietz is in trouble and Kraihamer has stopped at the exit of T10 – #32 looks done.

The Porsche’s damage is bodywork and rear aero – The car gets a new Michelin and is sent.

Both Lotuses have again been involved in very early incidents!

0:15 The lead gap is 4 seconds ahead now, Kristensen meanwhile is closing on Buemi for second place but Treluyer is dropping back a little, the #1 Audi now 10 seconds off the lead.

GTE Pro is now #91 from 51 and 97, the Porsche a couple of seconds to the good with Mucke a further 7 seconds back.

0:18 – Minassian is charging aback after the lap One contact, he’s up to third ahead of Robbie Kerr’s Delta ADR Oreca Nissan.
Next time around he passes the Greaves Zytek into T1 – second place for Pecom.

In GTE Am, Jean Karl Vernay’s lightning start has attached the attention of Eduardo Freitas, he currently leads the class and is running ahead of Kobayashi’s Pro Ferrari.

Stefan Mucke reports that on the team radio that he feels one of the rear tyres is graining “It’s on a real knife edge” He continues i 3rd in GTE Pro with Senna behind playing rear gunner!

Ruberti and Aguas are having a fine old battle for third in GTE Am, places exchanged and, for now at least, good clean fun from the #88 and #81 cars.

0:26 Nicki Thiim meanwhile is now back with the class leading #76 Porsche.

Buemi is making a better fist in traffic at present than the leader, the gap now under 2.2 seconds.

In LMP2 – Pla is now with Robbie Kerr in a battle for fourth in class – Minassian meanwhile is drawing closer to Martin for the lead of the class, currently 3 seconds back. 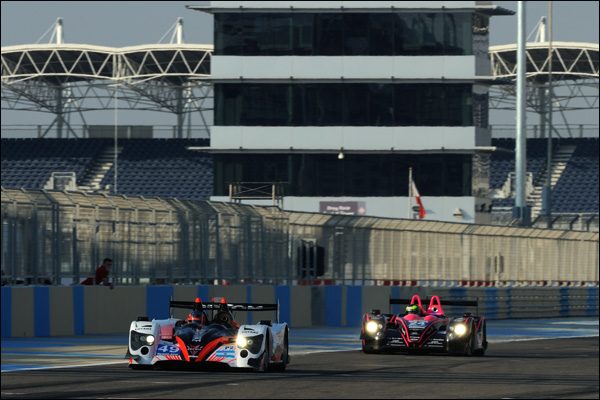 0:32 – Toyota’s current pace is allowing both cars to pull away from the Audis – The gap first through fourth now 13 seconds.

0:35 – Kraihamer has resurrected the #32 Lotus, he rejoins and is returning, slowly, to the pits. He doesn’t make it though, the car stops again at T13.

Mucke again reports a vibration from the rear of the #97, graining suspected to be the issue, he allows Senna by and now has the #71 Ferrari right behind

0:39 Bornhauser has a lurid spin in the #50 Corvette but rejoins.

Both Martin and Minassian pit form 1,2 in LMP2, Wirdheim leads the class with Baguette also pitting – Pecom turn around the #49 first and Minassian leaves with the advantage,

0:41 – Treluyer looks to be struggling, he pits with tyre troubles it seems.

Kerr has pitted the #25 too as Thiim takes the GTE Amm lead in the #95 Aston Martin.

0:43 – Buemi and Kristensen pit too – No driver change for either.

0:45 – Lapierre pits from the lead, both Toyotas lose a little time to the Audis on the pit stop, Buemi struggling to get away.

Treluyer tags Nic Jonsson tipping the Krohn car into a spin at T4, the Audi continues, for now!

0:49 – Mucke gives up the struggle, pits a little early and changes his errant Michelins, the GTE Pro pendulum swings. Turner is sent out with the #97

Minassian is pulling away in the lead of LMP2, the Toyotas, at present are outpacing the Audis pretty comprehensively.

Pecom’s pitstop meanwhile was fully 6 seconds faster than anyone else in LMP2, this despite taking more fuel from some.

#1 gets the warning (black and White) flag for the contact with #57.

Bruni leads but pits next time around in the #51 Ferrari – Vilander rejoins.

No Further Action over the start position of the #76 car.

There’s a minor brush between Lapierre and Aguas as the leader gets by the 8 Star 458.