Ecurie Ecosse powered by Black Bull have confirmed this morning that they will campaign their 2014-spec BMW Z4 GT3 in both the Blancpain Endurance Series and Avon Tyres British GT Championship this coming season. 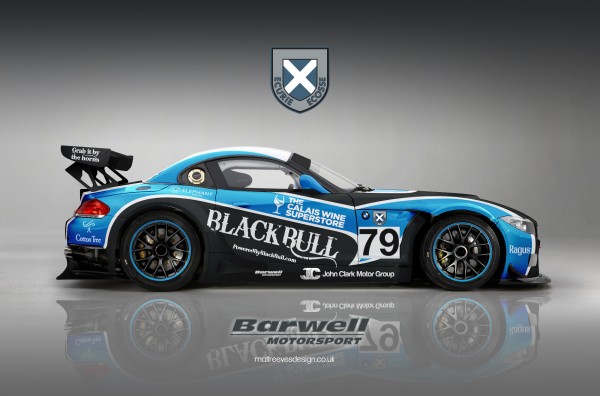 The team are looking to pick up where they left off in 2013 when Marco Attard and Olly Bryant finished third in the British GT standings, just four points shy of the title. With the latter moving over to the team’s Blancpain line-up, Ecurie Ecosse are delighted to welcome BMW Motorsport factory driver Alexander Sims into its fold.

A former McLaren Autosport BRDC Award winner, the 25-year-old will be making his British GT debut alongside Attard, who enjoyed an incredibly strong season in the category last year.

The core of last season’s driver roster remains however, with Alasdair McCaig and Andrew Smith accompanied by the incoming Bryant for all five rounds, while Ecurie Ecosse stalwart Joe Twyman joins the line-up for the blue riband 24 Hours of Spa.

Once again Ecurie Ecosse can call on the support of numerous long-term partners in their respective title bids. For a fourth season Barwell Motorsport will oversee its on-track programmes, while this will be the third campaign featuring BMW Motorsport’s involvement. And after their first year together in 2013, the team is delighted to announce an extended long-term commercial partnership with Black Bull Whisky that will see it run under the Ecurie Ecosse powered by Black Bull banner.

Hugh McCaig, Ecurie Ecosse Team Principal: “I am delighted that Ecurie Ecosse will be returning to British GT this year for another crack at the title, as well as taking on a fresh challenge in the form of the Blancpain Endurance Series. Both championships are extremely competitive, but I’m confident that we’ll be capable of delivering at the highest level thanks to the hard work of every team member, driver, supplier and loyal sponsor.”

Andrew Smith (Blancpain Endurance Series): “This is a very exciting programme for Ecurie Ecosse. We looked at a number of options for this year after a highly successful 2013 and believe, with the combination of BMW’s Z4 GT3, the team at Barwell and a first-class driver line-up, that we absolutely have the right ingredients in place to achieve success in these two championships. It has been a tireless effort to put the deal together in an extremely challenging economic environment and we have to thank all of our sponsors for their continued support. Ultimately we want to be back at Le Mans and this is a fantastic step in the right direction.”

Marco Attard (British GT): “It’s great to be back with Ecurie Ecosse and the guys at Barwell. I can hit the ground running now that I’m continuing with the same car and team, and have a full season already under my belt. This, combined with having a driver of Alexander’s calibre alongside me, means I have put myself in the best possible position to challenge for the title again.”

Alexander Sims (British GT): “I’m over the moon, as getting a full-time drive in a championship as prestigious as British GT is just fantastic. It’s a great opportunity to embed myself within BMW’s network of teams, and to work alongside a gentleman driver as talented as Marco. Ecurie Ecosse and Barwell enjoy a very impressive track record together, with last year especially strong thanks to Marco and Olly. I simply cannot wait for us to begin working together.”

Mark Lemmer, Barwell Motorsport Team Principal: “I’m absolutely thrilled to have such a fantastic driver line-up across both championships, and it’s great to be able to welcome Alexander to our fold; he is undoubtedly one of the most exciting young British talents in the world of GT racing. I fully expect Ecurie Ecosse and Barwell to be pushing for both titles!”