When the DSC Editor met Sunoco Challenge winner Bradley Smith at Brands Hatch before Christmas there were two thing on the agenda for the morning:

First was the interview we brought to DSC just a few weeks ago, and second was the opportunity for Brad to take me out on track, not in a DP (there is no longer a car available in the UK), but in something with a broadly similar mechanical layout, albeit with a very different lineage. 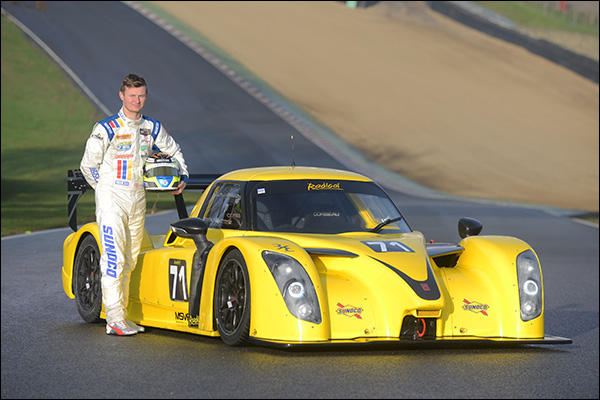 The pitlane at Brands wasn’t all that busy on a cold, damp December morning, a stealthy looking Noble, the MG BTCC team embarking on their pre season testing with new signing Marc Hynes, and a very yellow, slightly ‘snouty’ car that looks like nothing else on earth – Ladies and Gentlemen this is the Radical RXC. 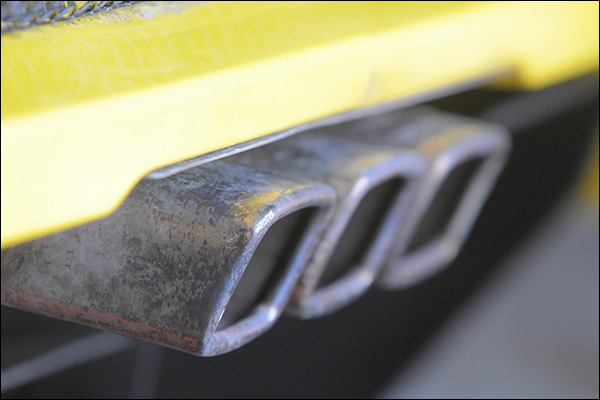 DSC readers may remember a couple of years ago that we road and track tested Radical’s first road-going Ford engined offering – astonishing performance and barely concealed road car dynamics were the order of the day from the Radical SR3 SL, a car that required commitment and making allowances for, a car able to leave a hypercar for dead but which, in truth was a barely concealed racer. 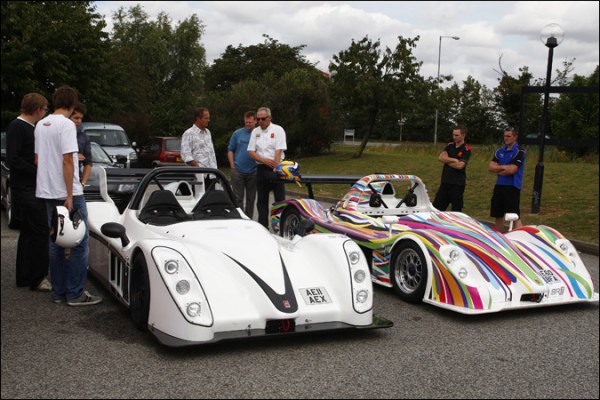 The RXC takes the game on very considerably, it’s Radical’s first closed top product and is designed to be a very capable track car, but also useable as a high performance sportscar on the road.

Looks first – The frontal styling is – unique! – That snout is there for a reason, two reasons in fact, cooling and downforce, but it does dominate the frontal view – Get over that though and the car is a tautly designed package. 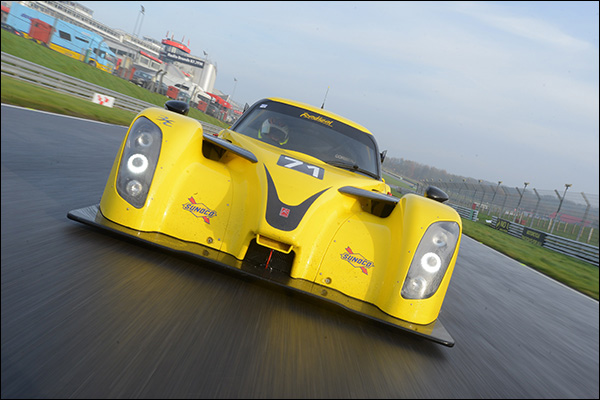 It uses Radical’s aluminium chassis tech and is bodied in glass fibre – The finish on the car presented at Brands Hatch though was near flawless.

The ally tub means that the side pods/ sills are tall and wide but any able-bodied enthusiast will have no problem boarding comfortably.

Once installed the seating position is comfortable and, as will be seen shortly, necessarily supportive. 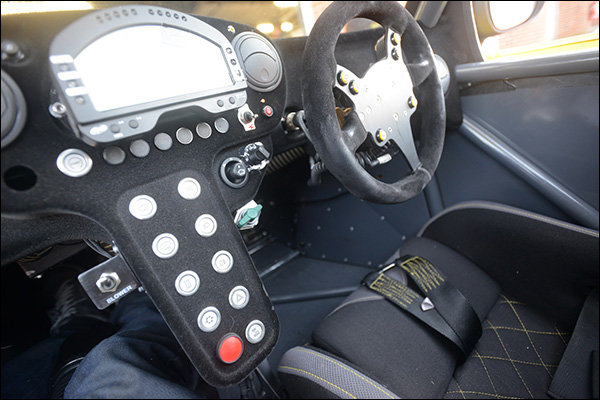 The fit and finish in the cockpit was impressive too, there’s no doubt this is a hand-built bespoke item, but there’s none of the resin and glue aromaed evidence of old here.

Bradley was on driving duty and was briefed to show off the full performance of the car, and that’s plenty! 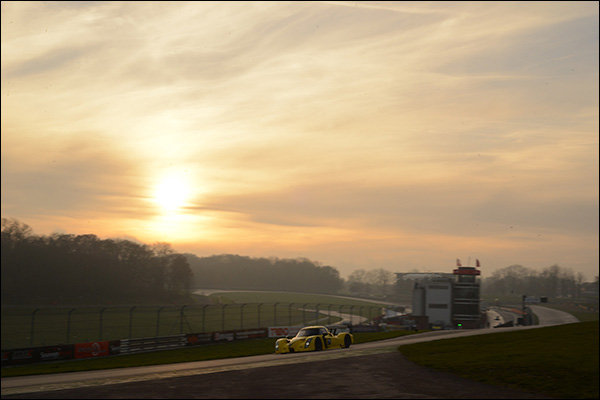 The whole machine weighs c.900kg – race car light – a powered by a mid mounted twin turbocharged 3.7 litre Ford V6, the same unit, in normally aspirated form, used for the Ginetta G55. Add a purpose-built Quaife seven speed sequential transmission into the mix and performance is set to be eye-opening. 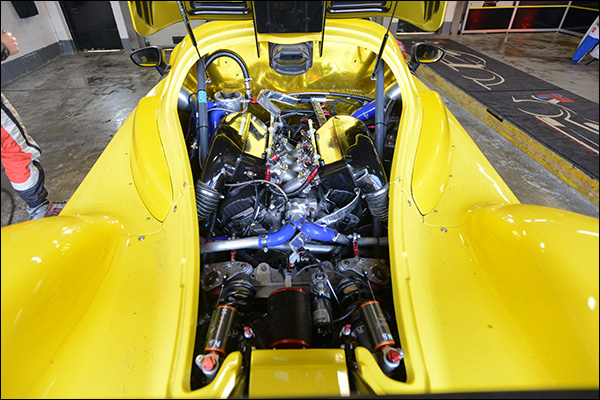 The brochure claims a 2.8 second 0-60 sprint and a top speed of 175 mph – Pitlane discipline, a damp track and the Brands Hatch Indy circuit wouldn’t allow any of that to be tested for accuracy but the real world punch under power, astonishing braking performance and grip showed very clearly indeed that this was no ordinary beast.

Out of the pitlane the revs rise and the speed gathers very rapidly before a racing approach to Paddock Hill bend, the trackday spec rubber finding grip despite the less than optimum conditions. 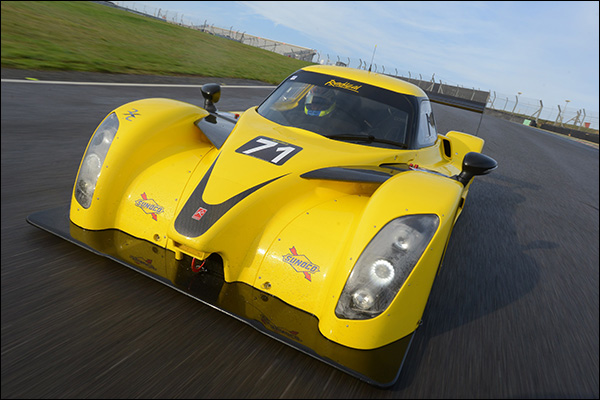 Bradley was pushing hard, the RXC giving messages back through the controls that were pretty familiar to the Championship winning Radical racer, the DNA is unmistakable but while this was looking like a very, very impressive trackday machine (as lap by lap the available grip was found and exploited, the reality is that it is all actually pretty civilised.

That isn’t to say that this isn’t the real deal – it is, and then some, grip levels far in excess of the road car norm, even the supercar norm despite the fact that the attainable speeds on this circuit really don’t allow the reportedly extraordinary downforce that the RXC generates to be unlocked.

No, by ‘civilised’ I mean comfortable, stable, with hints of rawness but with ride that inspires confidence in the machine and the driver.

Bradley pushed harder, and found the limits in these conditions in a couple of places, one, through Clearways, generated a tiny twitch that I could feel very clearly, so to though could Bradley and before I had a chance to react the moment was gone with a flick of the wrist, beautifully controlled by car and driver.  The second moment was coming through Paddock Hill bend, and this was a real moment needing real and meaningful input, the rear stepping out as Bradley took just a tiny bit more of a liberty than the RXC would allow.

Again though the moment was controlled instantly, a quick nod of acknowledgement from the pilot, and the momentum was regained, with further liberties taken at the next , and every subsequent corner – This thing is a major hoot!

Bradley explained it beautifully – “The RXC is a very nice balance between the traditional GT, bags of power and a bit of refinement, and a prototype but with good visibility and a fair amount of concession to the real world, it has good visibility and the cockpit is actually a nice place to be.” 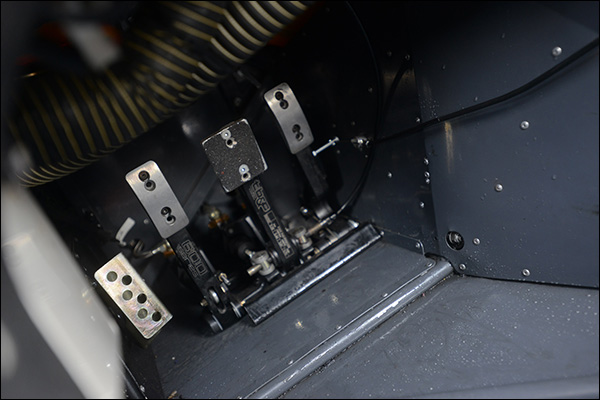 I had half expected this to be another stepping stone for Radical to bridge the gap between an ultra-extreme road car and a very capable trackday beast – It isn’t a stepping stone at all – it’s a bridge, or perhaps with deference to the engine supplier – It’s a Ford!

And it needs to be as the price is real world hypercar large c.£97,000, but that’s a realistic ask for a car that would show any track focussed GT road car a bright yellow set of heels.

It’s a price that buyers have already been prepared to pay, a dozen cars delivered in 2013, principally to buyers in the Middle and Far East, with more orders making their way down the Peterborough production line – There’s another thing here, the reality is that to come anywhere close as a road car it follows one of the race car Radical attributes, to buy anything else that goes that quick, add another zero!