Reigning British GT4 co-champion Rick Parfitt Jnr has announced that he will be returning to defend his title in 2014 and will be joining forces with Century Motorsport and Tom Oliphant in a Ginetta G55 GT4. He becomes the first champion to attempt to defend his crown since the GT4 class was introduced in 2008. 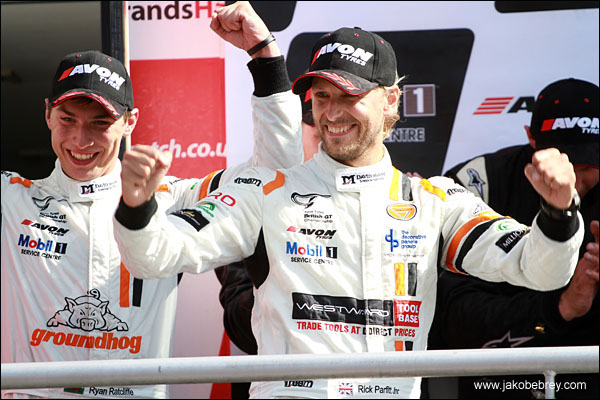 “Winning the title last year was something I could have never imagined, so retaining the title is my obvious aim for 2014,” said the 39 year old. “However, I’m under no illusions that this year will be even more competitive than ever before with some great drivers and the largest variety of cars racing on the grid.

“I’ve known Nathan [Freke] from his Karting days and have watched closely as Century Motorsport have built up a great team and reputation, clearly highlighted last season as our toughest rivals through their professionalism and dedication. I’m very happy to be joining them for 2014 and hope I can bring trophies and a little ‘Rock’n’Roll to their pit box!”

23 year old Oliphant arrives at the BGT with limited Ginetta Supercup experience (with Century), having spent the majority of his career so far in Formula Renault. He will dovetail his British GT campaign with a season of Ginetta GT4 SuperCup.

“Last year proved that having a great team mate is key to success in GT4 and in Tom I have a young ambitious driver, who is hungry for success and very quick,” added Parfitt. “This added to the fact that he will also be competing in the Ginetta GT4 SuperCup will mean he is practically welded into a G55 seat! We get on very well outside the car also which bodes well for a successful year. The beautiful G55 is a car I’m extremely excited to be in for this season. Hopefully it will be as quick as it looks, but our extensive pre-season testing program will ensure we should be perfectly placed for the opening rounds at Oulton Park!”

“I’m very excited to have Tom and Rick pairing up with us for 2014,” said Team Principal Nathan Freke. “Obviously Rick was one of our closest rivals in 2013, just beating us for the title at the last round and Tom has already shown that despite being a new GT convert that he’s got what it takes to be a very successful GT Driver. With the new Ginetta G55 GT4 and one of the strongest driver pairings on the grid, I believe Century Motorsport will be the team to beat in British GT4 this season.”