The new BMW M235i Racing will be equipped exclusively on Dunlop racing tyres for the 2014 season.

The new production racecar is based on the M235i Coupe and is powered by a six-cylinder, three litre engine with 333 horsepower. The M235i expands the BMW Motorsport range of vehicles under the BMW Sports Trophy client program. 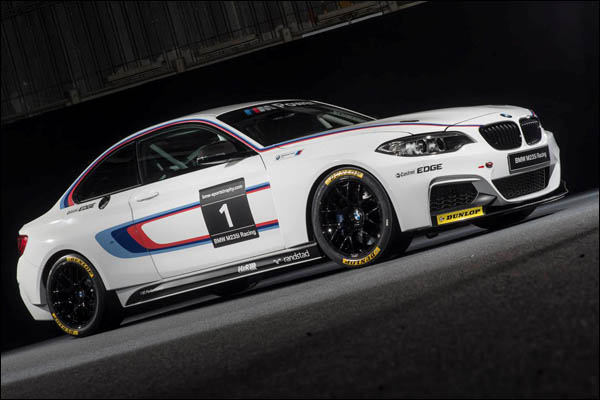 BMW Motorsport is relying on the expertise of Dunlop as the exclusive tyre partner. The two companies have celebrated many successes on the track together, most recently winning the 2010 Nürburgring 24 hours and the 2010 and 2011 American Le Mans Series manufacturer and teams championship together. BMW and Dunlop also work closely together on OE road car projects, with Dunlop RunOnFlat tyres being standard fitment on many models.

The racecar will have its own championship, the BMW M235i Racing Cup, which will take place in the VLN Endurance Championship 2014 . Every event takes place on the infamous Nürburgring Nordschleife, Europe’s longest and most demanding racing circuit, which has earned the nickname ‘Green Hell‘ due to the challenge it places on driver, car and tyres.

Dunlop , as an official technical partner of BMW Motorsport , will equip all the cars in the Cup with its racing tyres . The Dunlop Motorsport 265/660 R18 has been jointly developed with BMW Motorsport for use on the BMW M235i Racing.

“In Dunlop we know we have a strong and reliable partner at our side for the BMW M235i Racing. On the Nürburgring Nordschleife where the BMW M235i Racing will mainly be used in its premiere season, special demands are placed on the tyres because of the ever-changing weather conditions. We are pleased that we can rely on Dunlop’s expertise and years of experience of the Nordschleife‘

“This tyre was chosen due to its high levels of grip, consistency and excellent handling properties in the wide range of temperature conditions that can be expected in a racing season. BMW Motorsport were keen to ensure that even motorsport beginners could gain confidence in the vehicle , especially in the “Green Hell ” with constantly changing weather conditions‘

In addition to the dry-weather slicks which were developed for the circuit in Germany’s Eifel region, Dunlop will also offer rain tires, giving high grip and good stability even in the mixed wet and dry conditions that can often be experienced on the same lap of such a long track.

The BMW M235i Racing has been acclaimed by the motorsport media for its impressive overall package at a reasonable cost. Therefore, even in its first year, the car is already proving to be very popular. So far, 15 vehicles for the BMW M235i Racing Cup are entered in the VLN Endurance Championship at the Nürburgring in 2014. The BMW M235i Racing Cup is exclusively using Dunlop racing tires. In addition to the race tires Dunlop will provide the usual professional technical support and tire service for all teams at the track.