Team M-Sport Bentley have confirmed their driver line-up for the 2014 season.

As expected the first car sees the continuation of the all-British driver line-up that took the Continental GT3 to a fourth-placed debut at the Gulf 12 Hours in Abu Dhabi last December. 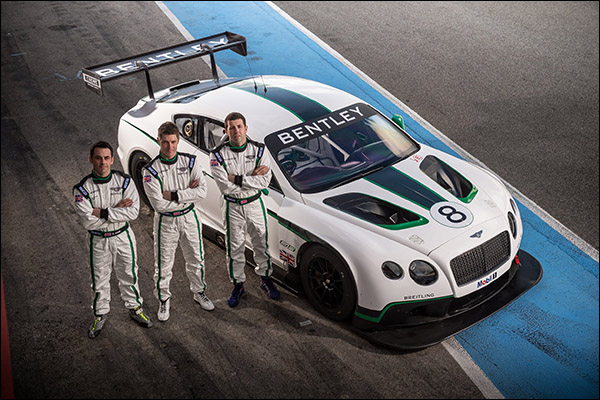 The second Continental GT3 will be piloted by Englishman Duncan Tappy who will be partnered with Frenchman Antoine Leclerc and Belgian former F1-racer Jérôme D’Ambrosio.

“Our six modern day Bentley Boys give me great confidence for the year ahead. The selection process has been tough after having had so much interest, but these six racers have shown the prodigious talent combined with the experienced, dedicated approach that we need. The whole team is now in final preparations for the season ahead, and we’re all extremely eager to get to Monza so that the real racing can begin.”

Guy Smith has been a Bentley Boy since 2001, and drove the Speed 8 Prototype to victory at Le Mans in 2003. Since then he has raced in the USA in the former ALMS championship, including winning the title in 2012.

Steven Kane has enjoyed a fifteen-year career so far, racing primarily in touring cars and sports cars. He competed in the Blancpain Endurance Series last year with JRM, finishing the championship in fourth position.

Andy Meyrick has a proven track-record that includes a fourth place finish at the 24 Hours of Le Mans and experience in British F3, VLN and GT3 categories. Last year, Andy spent time racing on both sides of the Atlantic, in the Blancpain Endurance Series in Europe and as lead driver for the innovative DeltaWing Racing programme in the USA.

Duncan Tappy started racing at the age of 10, competing and winning in various open-wheel championships. His experience includes A1 GP, the Monza 1000 km Le Mans Series race, Porsche Carrera Cup and the Superleague Formula. He has spent the last two years driving GT3 cars for a number of teams in the UK and Europe.

Antoine Leclerc becomes the first French Bentley Boy since Jean Chassagne in the 1920s. 2008 French GT Champion with a decade of GT experience, Antoine drove full seasons of the Blancpain Endurance Series, including the 24 Hours of Spa, in both 2012 and 2013 for ART.

Former F1-driver Jérôme d’Ambrosio has enjoyed a high-profile career that has progressed from karting to the pinnacle of motorsport. After working up the open-wheel racing ladder, Jérôme drove for Virgin Racing in the F1 World Championship in 2011. He finished 16 Grand Prix in 2011, including two 14th place results in Australia and Canada.