Erebus lays down the marker with a double win

Richard Muscat had a dream Australian GT Championship presented by Pirelli debut this weekend taking both races at Sandown Park for Erebus Motorsport in the Mercedes SLS GT3. 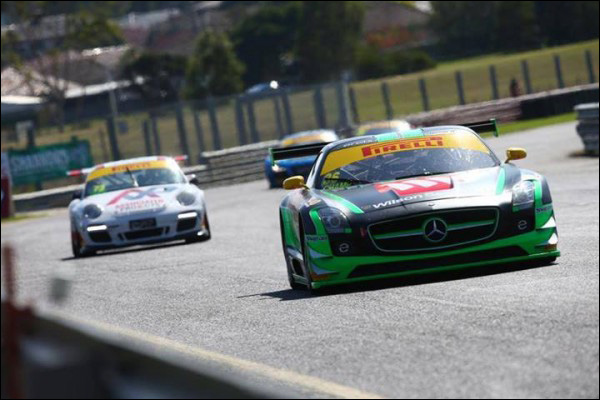 Muscat who is stepping up to the GT championship from the second tier Porsche series made his impact on Friday when he took the quickest time in practice three and a time good enough to top the day. It all came apart in qualifying however when his team noticed an engine issue just prior to the session.

“We warmed the car up and everything was good but, luckily one of the mechanics spotted a lead in the engine fuel line. We tried to fix it but it kept rupturing so we missed the session,” Muscat said

“It was lucky that we caught it in the garage. If it happened on the track, spurting on a hot engine and on the electrics it would have been a massive fire – which would not have been ideal.”

This issue placed him last on the grid but would give him an enormous advantage going into the race given his pace. The Australian GT Championship runs a system of compulsory pitstop times, the further you qualify at the grid the longer you have to stay in the pits. As such Muscat would have a short pitstop. 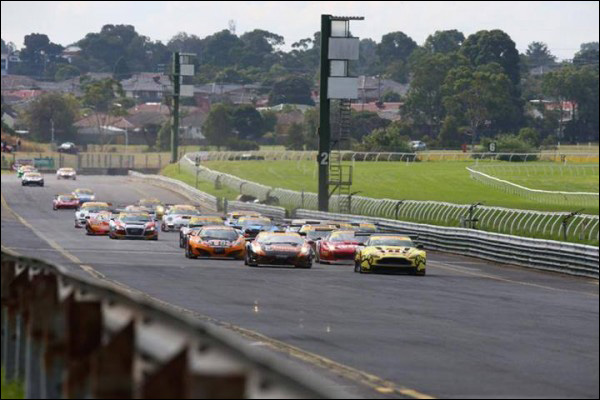 This would certainly play into his strategy for the first race.

“We knew we had a pitstop advantage. We had 35 less seconds in the pits over the leader so basically all we had to do was stay within 35 seconds of the leader and we’d basically come out ahead in the pitstops,” Muscat said.

“We made sure we kept the gap to the leader, after the pitstops we were in the lead and ended up winning the race pretty comfortably.”

With that in mind it was always going to be a difficult prospect for the remainder of the field. The pit strategy will affect none more than Klark Quinn. The McLaren driver and the defending champion faced a much longer pitstop, though Klark was not critical of the rules.

“I was quite happy with that [pitstop rules]. I knew he would have a shorter pitstop and would win unless something extraordinary happened,” Klark Quinn said.

“He didn’t get the qualifying points which are vital to win the round so it is kind of fair. That is just GT racing, I think the points works really well, the compulsory pitstops works really well. you do get the odd occasion where you have problems and don’t qualify well. I don’t think it disadvantages at all.”

Klark had qualified McLaren in fourth position and ran a fairly anonymous race but ran clean ending up some 30 seconds behind Muscat.

Third place went to the Maranello Motorsport duo of John Bowe and Peter Edwards in the Ferrari 458 GT3. They qualified on the front row and had battled with their front row counterparts Justin McMillan and Stephen Richards in a Lamborghini Gallardo GT3.

Both would suffer from having a gentleman driver in the car in the case of Ferrari Peter Edwards and in the case the Lamborghini Justin McMillan. They also served longer pitstops making it tough to challenge Muscat’s Mercedes.

It all came apart though with 10 minutes left for McMillen as he tried to pass Edwards. There was not enough track and with Liam Talbot’s Audi also on the scene, an accident ensued, damaging McMillen’s car and forcing the Lamborghini to retire. 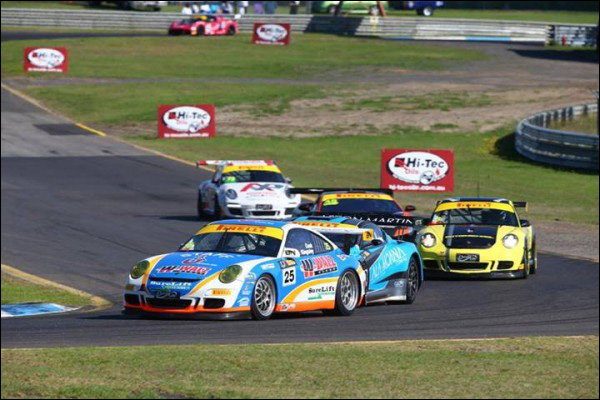 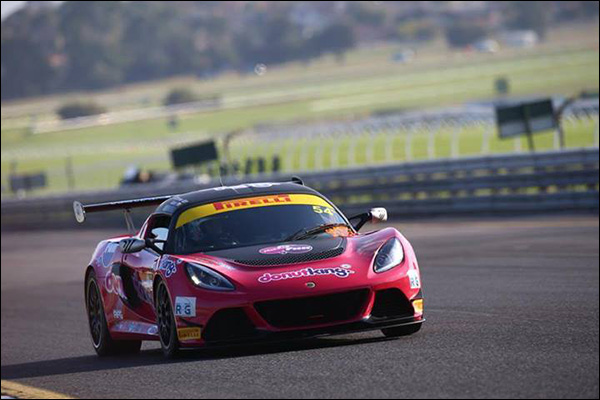 Race two like race one, was raced in sunny conditions. After his race one win Musket was start from pole position and would have to draw out quite a gap giving his additional pitstop time.

The safety car’s intervention – Jan Jinadasa spun his Lamborghini Gallardo into the gravel was crucial to the outcome of the race.

The safety car would come out just before the compulsory pitstop window which would hurt those who qualified further up the grid.

Muscat had eked out a lead but that was gone. His pitstop came with the field bunched up and he found himself down in the pack and he would have to battle through.

“Race 2 was certainly a bit different [from race 1]. We started from pole and cleared the pack like we hoped but a safety car came out about five minutes before the pit window opened,” Muscat said.

“That shot us in the foot a little bit.”

In a race with differing compulsory pitstop times and the safety car intervention, one driver’s loss is another’s gain. Ben Eggleston in the Trophy class Aston Martin found himself at the pointy end of the field. He led the race but was eventually caught by the newer cars. While he was unable to hang on for overall victory he did score an overall podium in third and an easy class win.

For overall honours though, Muscat was battling back. He battled his way through the field. He would have an enormous battle with Tony Quinn in his Aston Martin, Klark Quinn and the Maranello Ferrari with Bowe behind the wheel.

Muscat put on a superb performance to take the lead and the victory.

“I then had to start chasing them down. Unfortunately Steven Richards retired with a mechanical issue. I past Tony [Quinn] and it is difficult to pass him with his straight line speed. It was pretty tough to get by.

“It was great from an entertainment point of view though when I did go for it. There was me, John Bowe and Tony Quinn side-by-side for about six corners or so – it was pretty close stuff.”

But the story would not end there, with the battle for the podium positions taking out one of the leaders and a back marker late in the race. Tony Quinn was battling hard with John Bowe when he outbraked himself coming into turn one. This forced Bowe wide and spun Quinn into the path of the hapless Jim Manolios’ Ferrari.

This eliminated both drivers. In a cruel twist for both drivers, Manolios had borrowed Quinn’s Ferrari for the race after his Corvette was withdrawn because its upgrades weren’t complete. 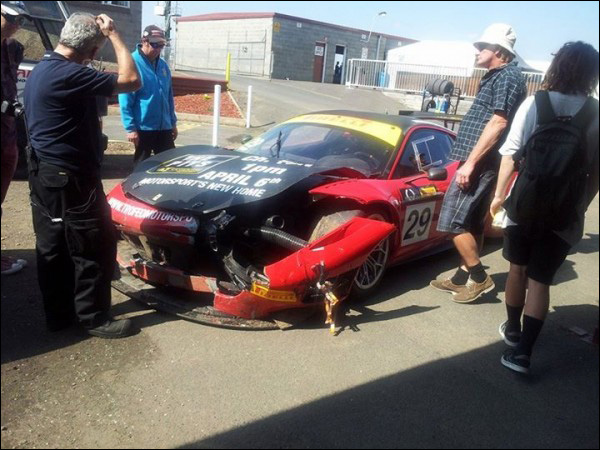 This incident brought out the safety car but also solidified the results with Muscat in the lead from Edward/ Bowe and Eggleston. Klark Quinn had been battling for podium but decided to ease off after seeing the Ferrari and Aston Martin crash. 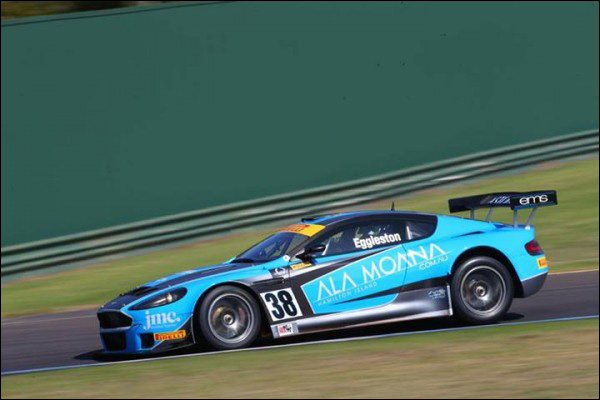 The GT challenge class was again taking out by Brendon Cook and Matt Kingsley. They were involved in a massive battle over the weekend with father and son duo Ben and George Foessel.

“Race 1 I was almost a full lap down on our main competitor but I was able to claw back half a lap,” Ben Foessel said.

“In race 2 we didn’t get a good start and had to fight with my main rival, Brendon. Once I got past him I got held up, surprisingly by a Ferrari 458 Italia – which is unexpected. It was quite a tricky situation to get past him as he had more grunt down the straights.”

Tony Alford/ Mark O’Connor again took out the GT sports category ahead of Mark Griffith and Tony Martin who are both driving Ginettas.

The next round takes place at Phillip Island at the end of May for 101 lap endurance race where will we see two drivers per car and it is anticipated some V8 Supercar drivers will join the field.

“I haven’t decided who will be a co driver with me but I am trying my best to get Shane Van Gisbergen. If I can tie him down, it will really help my cause for the Championship,” Klark Quinn said.

“Whoever wins will be in a good place for the rest of the year – especially with the Highlands 101 ending the season.”

After round one however, Muscat and Erebus have the momentum. Erebus have won the Bathurst 12 Hours before but haven’t had the GT Championship success they have expected. They are back for a third try at the Championship and this result firmly places them as favourites.

“We are in this Championship to win it,” Muscat concludes

“Erebus have been in the Championship for three years. They want to win it…”

An ominous warning to the rest.