Regular readers of DSC will probably be aware that the chances of any racing driver making it to the stage of actually earning a living from the sport are rather slim and that becoming and remaining a professional involves an awful lot of hard work. One man who has made that journey is reigning ELMS champion Matt Griffin and we are delighted to welcome the Irish ace to the ranks of DSC’s guest columnists.

Matt will be reporting on his travels throughout the course of 2014 as yet another intimidating schedule takes him to races and tests all around the world; and, with his FIA WEC and ELMS seasons about to start this weekend, he starts by bringing us up to date with what has already been a very busy year. 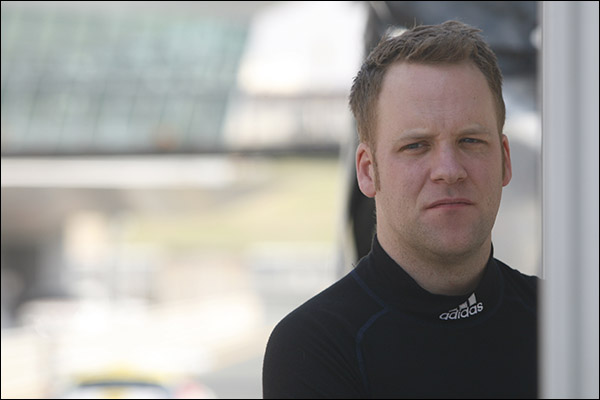 The start of 2014 has been extremely busy for me. I came in to this year off the back of a very successful 2013. In total I won eight races, including winning the European Le Mans Series GTE championship (together with team mate Johnny Mowlem), finished third at Le Mans (in class) and won the Pro-Am category (fifth overall) at the 24hrs of Spa. I also raced all over the world and enjoyed every second of it.

I spent Christmas and New Year together with my family, but on January 2nd I headed west to Florida for the “Roar before the 24” test at Daytona international speedway. I am racing in the North American Endurance cup with Spirit of Race Ferrari alongside teammates Jack Gerber and Michele Rugolo. 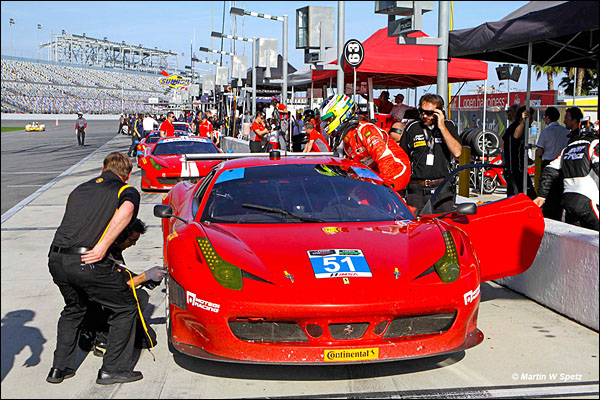 It was my first time in Daytona and I was totally blown away by the sheer scale of the speedway. Daytona is unlike any other track in the world with high banking, high speeds and the tight and twisty infield section; it’s totally unique. It was a brand new car, so the main objective of the test was to make sure everything was as it should be.

After three days of very un-Florida-like weather (approx 3° c) my job was done. The level of competition was high, but I was confident that we would be on the pace three weeks later for the race. But while I was headed back to the UK, I wasn’t going home. My travel plans were Orlando – London Gatwick (LGW) – Dubai for the 24hrs of Dubai the following weekend.

I Arrived into LGW bleary eyed at 7am on Monday January 6th not looking forward to the five and a half hour layover. Luckily for me I managed to get a “Pod” in the Japanese style “Yotel” hotel located directly in the LGW terminal. A few hours sleep and a shower and I was feeling more like myself; next stop, the desert………

I was racing for Ram Racing with Johnny Mowlem, Jan Magnussen and Cheerag Ayra. 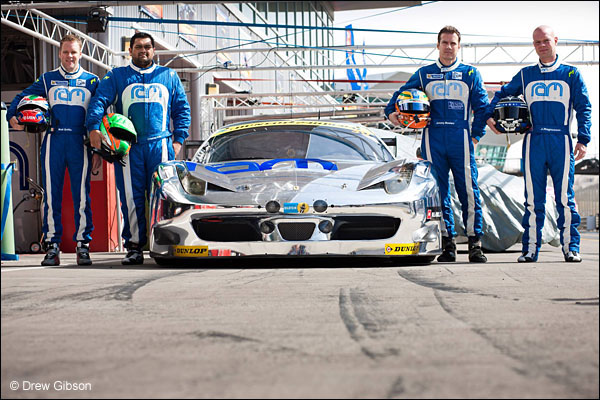 I was super confident coming into this race – it was my fifth time there, I had great teammates and an awesome team. Right from the first laps the car was fast. We qualified sixth (fastest Ferrari) and were leading the race at the halfway point. Races like these are not 24 hour endurance races anymore; to be in a position to fight for the win you have to do 24 hours of qualifying laps and take some risks on the way. 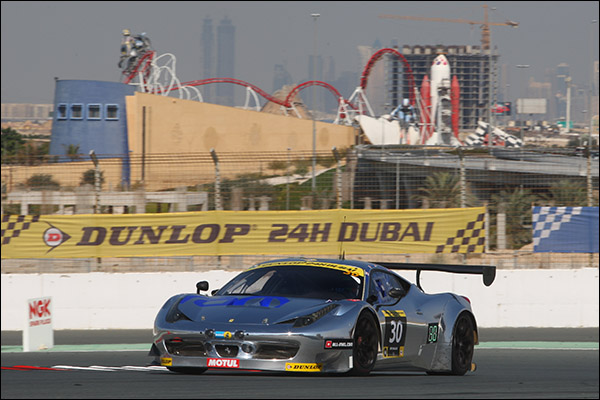 Unfortunately, while we were leading, Johnny had some contact with a slower car damaging our radiator. The team did an incredible job fixing the damage and we got back out, albeit way down the order and with any chance of a top result gone. When you are going flat out you have very little margin, so the contact Johnny had could have happened to any of us – it was just “one of those things” We did finish the race, however, which is always the first objective with a 24hr race. 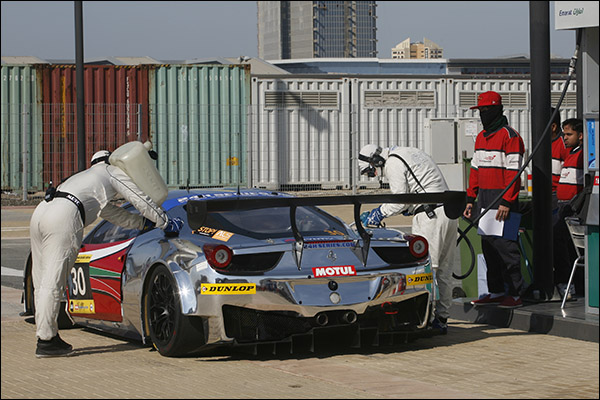 After the race my wife and I managed to grab a few days in the Dubai sun before heading back home.

There was no time to dwell on what might have been in Dubai as I only had three days at home before another airport and plane beckoned, and on Monday January 20th I headed back to Daytona for the Rolex 24hr.

After the work we did in the test I felt we had a chance; it was going to be super competitive, but again we had a very strong team and driving crew. Practice went well and we were in good shape for qualifying. I qualified the car and was on a very good lap when I made a small error and ‘kissed’ the wall after Turn 7, causing a puncture and the end of our qualifying. I was disappointed in my mistake but the car was not damaged and the race is long. As we were starting at the back we decided to start our Amateur driver, Jack Gerber, as it gave us more options with the strategy.

Daytona on race day of the Rolex 24 is a frenzy of activity. There is no time to chill and get your head in the game; it’s just flat out with briefings, autograph sessions and media commitments from 9am until the race starts. 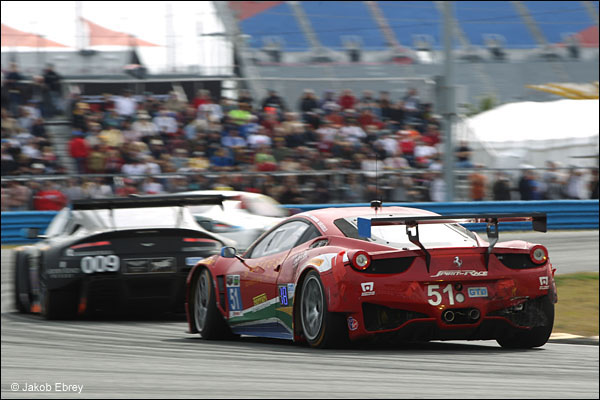 We were going well until we had a gearbox issue after about three hours. Unfortunately, it required a trip back to the pits for repairs and we rejoined 20 laps down with 18 hours left to run. The reality was that we probably didn’t have a car capable of fighting for victory, but a top-five finish was a definite possibility. That’s racing as they say; we made it to the finish, but for the second time not with the result I wanted. 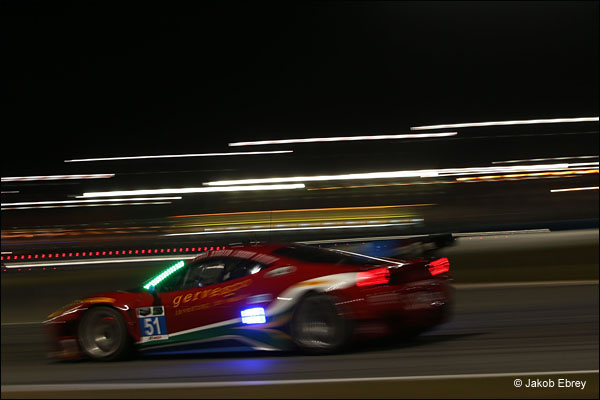 24 hour races really take it out of you and I arrived back in the UK on January 28th very tired. Luckily this time I had six days at home before I left for my longest trip of the season. The Bathurst 12hr was next and I left for Oz the following Monday.

The Trip to Sydney is a tough one – a total of almost 40 hours travelling from my door to the famous Mount Panorama track in Bathurst. I was driving for Clearwater Racing Ferrari and, with our finishing record over the last two years being third and second, we only had one aim. 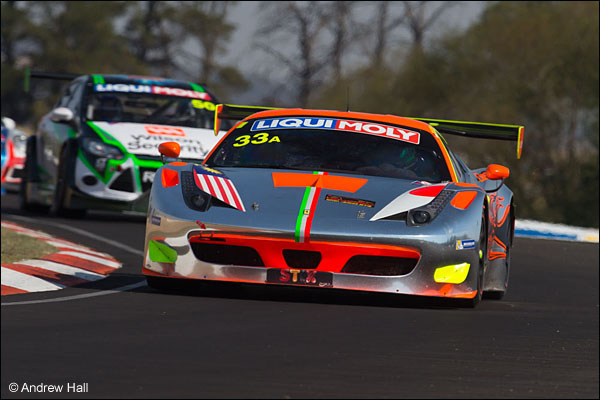 Clearwater is a top team and as always the car was rapid, well prepared and looked striking. Our strategy was to let the amateur driver qualify and for him to start. There is a minimum of three hours that the Am has to drive, so Mok Weng Sun started the race and did a perfect job before handing over to Japanese driver Hiroshi Hamaguchi. As the end of Hamaguchi’s stint neared, things were looking good. I was next in and then it would have been Craig Baird and I until the end of the race, in nine hours. But while I sat with my helmet on, ready to jump in, disaster struck and our car was involved in a huge crash with the Factory Nissan entry. The main thing was that all the drivers were ok but our race was done. For me it was super disappointing. The Bathurst 12hr is my favourite race and Australia is a long distance to travel and not do a single racing lap.

I arrived back in the UK still disappointed – I most definitely was not having the start to the season I had wanted.

It wasn’t long before I was on my travels again, though, as five days later I was back on a plane bound for Florida for the official test for the Sebring 12hr. It was my first taste of Sebring and straight after my first lap I knew this was my kind of race track; grippy, bumpy and tough. A real “man’s track”. The test went really well and we ended up fourth fastest, but I felt that there was still a lot more to come from my #51 Spirit of Race Ferrari when we came back for the race! 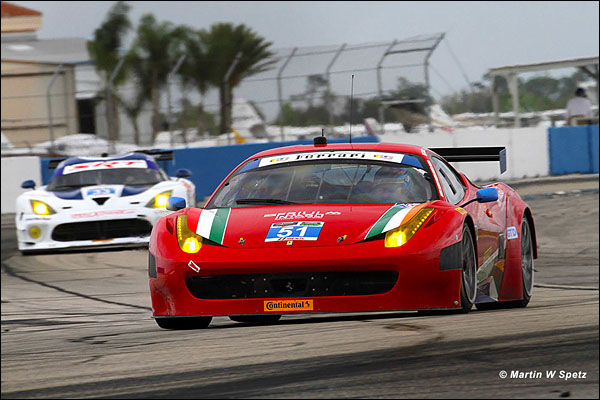 I had two full weeks at home and I felt like I really needed some R+R. it gave me the chance to spend some much-needed time with my family, get over the constant jet lag and get down to some proper, structured training.

I headed back to Sebring on March10th, feeling fully refreshed and confident going into the race.

Again, practise went very well, and as in Bathurst we decided to qualify and start our Amateur driver. This gave us the opportunity to use any Safety Cars or full course cautions more strategically. 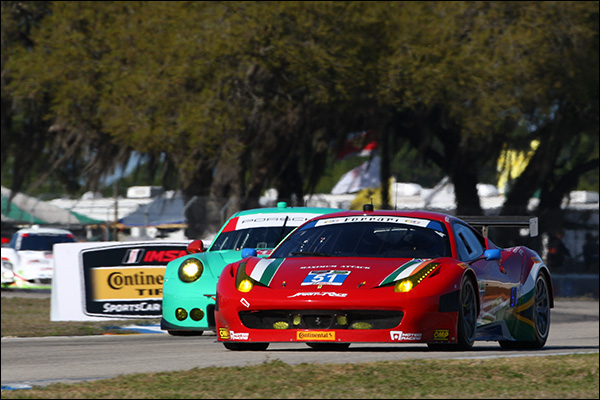 Jack was doing an amazing job and we were still on the lead lap as his driving stint was coming to a close. But as I waited to jump in the car, another setback………

While adjusting something on the car prior to the pitstop, Jack slightly missed his braking into the final turn. The result was contact with the tyre wall and a trip to the pits to replace the left rear suspension. The team did an almost incredible job here and we only lost 10 laps. The chance of a win was gone, of course, but we managed to climb back to 14th and finish what is probably the toughest endurance race there is. 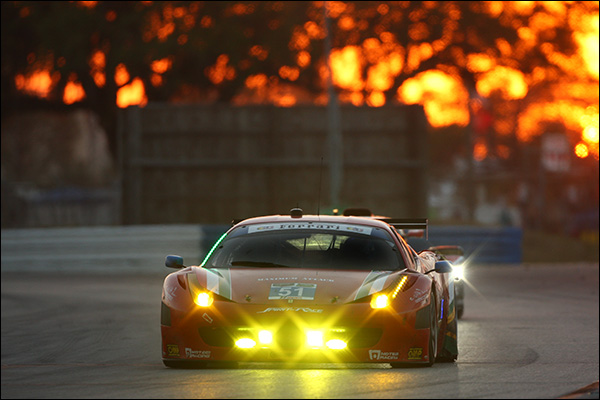 As is my life, I managed less than 24 hours at home before heading to Navarra for the first test of the season with Ram Racing. I am driving for Ram this year in the GT Pro class of the FIA World Endurance Championship; last year we had a great year in the ELMS, winning three races en route to the drivers championship with Johnny Mowlem. For this season my teammate will be Alvaro Parente, as Johnny will be in the other car. 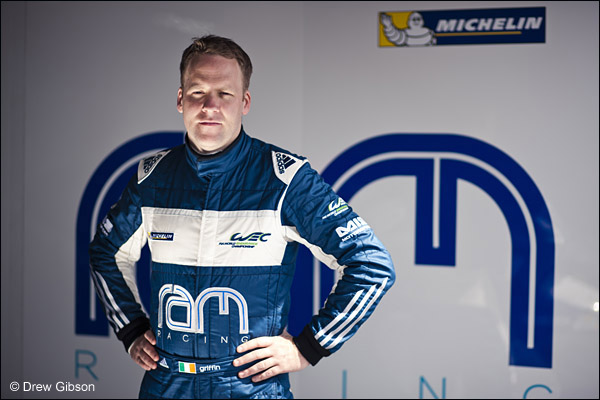 We will be the only non-factory team in the WEC GT Pro class this year, so we have a difficult task ahead. Ram is a very professional outfit, though, and together with Alvaro I am sure we can mix it with the works teams. We made some great progress with the car over the two-day test.

I managed to enjoy two and a half days at home before heading to Vallelunga near Rome for a two day test with AF Corse Ferrari. I will be driving for AF this year in both the ELMS and the international GT Open. This test was the first time I got to drive our ELMS car. My teammates for the ELMS will be Duncan Cameron and Michele Rugolo, and I know AF very well as I have driven for the team since 2008. It would be a dream to win back-to-back ELMS championships. It will be really difficult but that is our aim.

One day at home and straight off to the south of France, where the Circuit Paul Ricard was the venue for the official WEC test – or ‘prologue’, as it is known – followed by the official ELMS test. 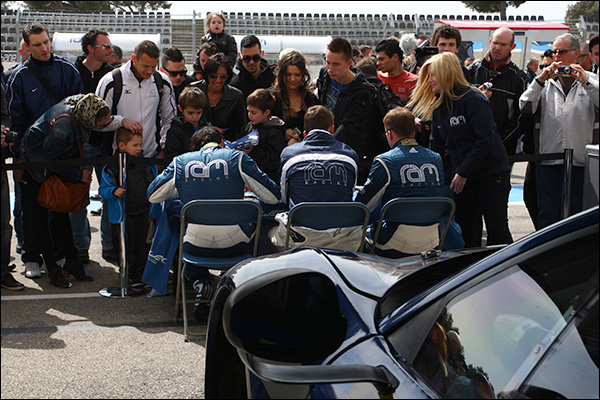 This was an important test for Ram and our WEC programme as it was the first chance we had to see where we would stack up compared to the other teams. We did two days of hard work, and Alvaro and I were joined by James Rossiter, who is one of the candidates for the third seat at Le Mans. We felt that we were on the pace, but the real proof will be at Silverstone when we arrive for Round 1 on Easter weekend. 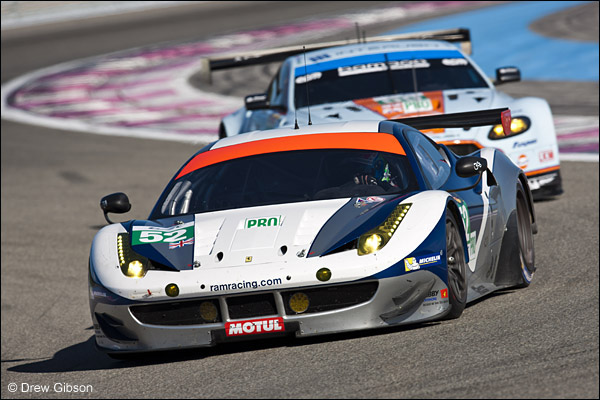 Two days later it was time for the official ELMS test with AF Corse and it was a good opportunity for the three drivers to find the correct driving position. I ended up second fastest overall and was really happy with my car. 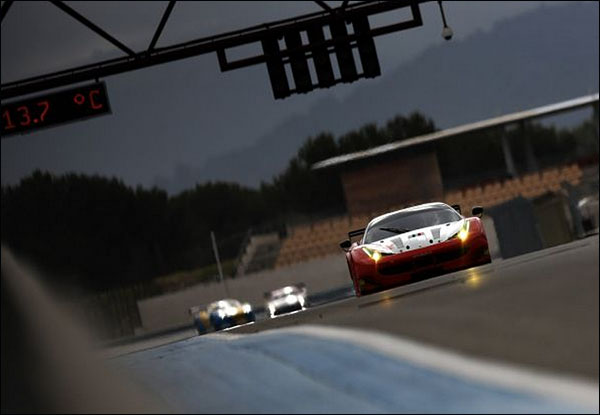 So that is this year so far. Next up will be Round 1 of both the WEC and ELMS on Easter weekend in Silverstone. I will be doing both championships, with the four-hour ELMS race taking place on Saturday and the six-hour WEC on Sunday. It will be a difficult and very busy weekend – two championships, two teams, but the same goal.